US gives SVG satellite phones for hurricane season use 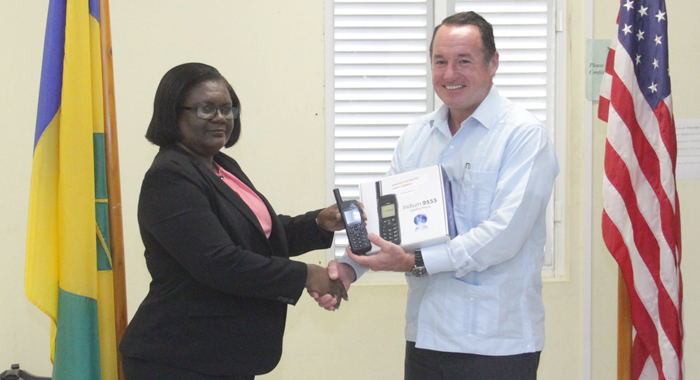 Director of NEMO, Michelle Forbes, right, receives the phones from Joaquin F. Monserrate, deputy chief of mission at the US Embassy in Barbados, in Kingstown on Thursday. (iWN photo)

The United States Embassy in Barbados has provided two satellite phones to St. Vincent and the Grenadines (SVG) for use during the 2019 Hurricane Season, should a national emergency arise.

The hurricane season runs from June 1 to Nov. 30, but the phones will remain in SVG until January 2020, when they will be returned to the embassy for upgrade and/or replacement before being deployed again next year.

A satellite telephone, satellite phone or satphone is a type of mobile phone that connects to other phones or the telephone network by radio through orbiting satellites instead of terrestrial cell sites, as cell phones do, Wikipedia says.

The advantage of a satphone is that its use is not limited to areas covered by cell towers; it can be used in most or all geographic locations on the Earth’s surface, according to the online encyclopaedia.

While use of satellite phones is relatively costly, a major advantage is that they continue to work when mobile network infrastructure and service collapse after a natural hazard such as a hurricane or earthquake.

“… we really want to extend a heartfelt thanks to the US government for the office of the satellite phone that will be used during the hurricane season,” director of NEMO, Michelle Forbes said at the handing over ceremony at NEMO’s headquarters in Kingstown on Thursday.

Forbes said that there has already been one named sub-tropical storm — Andrea — which went up in the North Atlantic and SVG does not know what is in store for it in this hurricane season.

“The offer of these two satellite phones is really crucial” she said.

“During emergencies or following emergencies, one of the things that we often take for granted is the issue of communications. We assume that a storm is going to pass over and nothing much is going happen and we will be able to still speak to each other via telephones and via other means.

“But, our history in the region and recently in 2017 has shown us that communications is one of the first sectors or lifelines to go following the impact of a hazard, she said.

And we really must boost our operational readiness in terms of being able to communicate not only with inter-agencies”.

Forbes said that in addition to bridging the communication gap between communities in case of emergencies, the phones will help officials to communicate with regional partners, especially the Barbados-based Caribbean Disaster Emergency Management Agency (CDEMA), the United States Embassy in Bridgetown and other friendly governments.

And, Joaquin F. Monserrate, deputy chief of mission at the US Embassy in Barbados, said that his embassy has deployed two satellite phones to each of the six Organisation of Eastern Caribbean States countries that it serves and CDEMA.

“This is really a history of lessons learned,” he said adding that the United States is a Caribbean nation and the US Virgin Island and Puerto Rico were among the Caribbean nations that were impacted by cyclones during the 2017 Hurricane Season.

“But it took us that experience in 2017 to realise that at the time when we need it the most, we did not have the communication necessary to be able to deliver aid, to consult on the needs of each country.”

The envoy said that one of the lessons that the region learnt from Caribbean nations is that communications is crucial, particularly in the first 72 hours after a disaster.

He said that, in that sense, the United States Embassy in Bridgetown thought that being able to communicate with the disaster management office and the Office of the Prime Minister is crucial.

“At the same time, they can communicate with each other,” he said.

Monserrate said that just last month, SVG joined with the rest of CARICOM at a meeting in Miami with the Department of State to discuss their new partnership on resilience.

“We see this partnership as the way forward to continue contributing, cooperating not just in terms of disaster relief and disaster communications but also in mitigating the conditions that make a disaster worse,” Monserrate said.

The diplomat said that the phones are assigned to SVG and while the embassy will repossess them next January for review, upgrade and possible replacement, they will be made available to the country ahead of the hurricane season should there be a national emergency.

Monserrate said his embassy is aware that hurricane is not the only natural hazard SVG potentially faces, noting that the country has an active volcano and is also located in an earthquake zone.