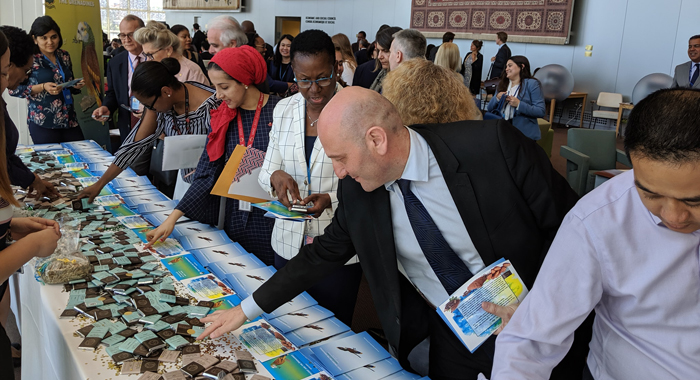 With little money to finance its bid for a non-permanent seat on the United Nations Security Council, St. Vincent and the Grenadines (SVG) turned to innovation.

And, in the final weeks and days before Friday’s vote, two members of the Vincentian cabinet have released a book each, while chocolates and brochures were on offer at the United Nation’s headquarters on Tuesday.

Speaking Tuesday in Kingstown at the launch of his latest book, Prime Minister Ralph Gonsalves said that he would travel to New York the following day, where he would meet up with Minister of Foreign Affairs, Sir Louis Straker.

The visit by the prime minister and his deputy to New York comes as Kingstown makes its “final push” ahead of the vote on Friday.

“And I just want to say I am very confident of that. I’ll be very surprised and disappointed if we don’t get the two-thirds of the general assembly,” the prime minister told the audience at the launch of his publication, “The Political Economy of the Labour Movement in St. Vincent and the Grenadines”.

“Out of the 193 votes, we need to get 129/130 and I have been counting heads and I feel sure we are above that number. But, as they say in baseball in the United States, it’s not over ‘til it’s over; it’s not over ‘til the fat lady sings. But we are – I think we are in a good place.”

He responded to his critics, who have said that the bid was for personal aggrandisement.

He said that his government opted for a long campaign because it does not have money to spend on a big campaign.

“Camillo’s book was part of the campaign. This is part of it, too,” he said.

On April 17, “Globalised. Climatised. Stigmatised.”, a book by Camillo Gonsalves, SVG’s Minister of Finance and the prime minister’s son, was launched at the United Nations by the President of the United Nations General Assembly.

The book is a 186-page collection of essays about the specificities, opportunities and developmental challenges of small island states and was also launched in Calliaqua, a town in East St. George, which the younger Gonsalves represents in Parliament.

The prime minister told his book launch audience on Tuesday that come Friday, they will see in the newspaper a summary of what SVG’s campaign has been about.

“… so that whether we win or lose, whether we get the seat or we don’t get it, the people of St. Vincent and the Grenadines will be able to read on Friday morning what we have been about.”

The prime minister said that on Tuesday, something happened that is emblematic of the 11-year campaign that his government has led in its effort to be elected to the United Nations Security Council.

“We set out our wares at the United Nations today. Several long tables. We prepared a final brochure, beautifully designed with Amazona guildingii [the national bird] on it with a piece of  — a twig, sign of peace, because we are about peace and security.

“And we simply spread on it, hundreds and hundreds of St. Vincent Chocolate. So, as you pass and pick up one of the brochures, you take up one of our chocolate bars — it’s cheap. When I say cheap, it’s inexpensive. We don’t have any money to carry anybody on any cruise but we can offer a brochure and a chocolate bar from St. Vincent to draw attention and it is different and people commented about [how] it was classy and very creative and so on.

“And that is the way — you know me, I am not a man for bling, we try to do our work very solidly but within the spirit of our Caribbean civilisations. You don’t have to do bling in order to enjoy yourself and to do things in a creative manner,” Gonsalves said.

In 2008, Kingstown announced a last minute bid to run for the Security Council, amid accusations that it was being used by Venezuela as a proxy against Colombia.

Kingstown withdrew its bid after learning that several CARICOM nations had committed to vote for another nation.

Kingstown then announced its intention to bid for seat for the 2020-2021 term.