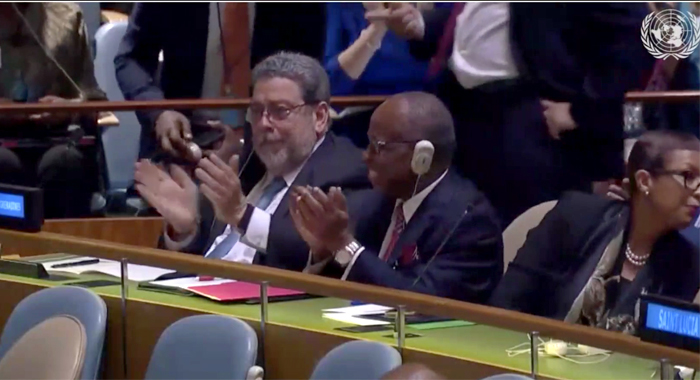 Prime Minister Ralph Gonsalves, left, and Deputy Prime Minister Sir Louis Straker applaud after the announcement of the results at the United Nations on Friday. Kingstown’s permanent representative to the UN, I. Rhonda King is at right.

St. Vincent and the Grenadines is in for a four-day weekend as the government has announced that Tuesday will be a public holiday to celebrate the nation’s historic election to the United Nations Security Council.

On Friday, SVG defeated El Salvador, 185 votes to 6 to become the smallest nation ever to be elected to highest decision-making body of the United Nations Security Council.

Kingstown was the Group for Latin America and Caribbean (GRULAC)-endorsed candidate for the Security Council for the term 2020-2021 and had been campaigning for a decade before San Salvador announced a last-minute bid.

“Because of this victory and the responses we are getting from home, WhatsApp messages, telephone calls, all throughout the Caribbean, outstanding messages from Prime Minister [Mia] Mottley [of Barbados], [Prime Minister] Gaston Browne [of Antigua and Barbuda] from others, I can’t call all the names, [Deputy Prime Minister] Sir Louis [Straker] advised and I have accepted his advice and I have informed the cabinet secretary that Tuesday will be a public holiday.

“She’ll put all the matters in place to have an extraordinary Gazette printed in commemoration of this historic occasion of our election to the non-permanent seat of the Security Council.”

The nation will have back-to-back national holidays, as Monday, Whit Monday, is already a public holiday.

The cabinet is expected to have their own private celebrations later today (Friday).

“I understand, I have been informed by my office that Montgomery Daniel, the acting prime minister, is so moved that he has summoned Cabinet for 3 o’clock to celebrate. Not any big celebration. Maybe just to give thanks to Almighty God,” Gonsalves said.

The Security Council has primary responsibility for the maintenance of international peace and security.

Each of its 15 members has one vote and under the Charter of the United Nations, all member states are obligated to comply with council decisions.

The Security Council takes the lead in determining the existence of a threat to the peace or act of aggression.

It calls upon the parties to a dispute to settle it by peaceful means and recommends methods of adjustment or terms of settlement.

In some cases, the Security Council can resort to imposing sanctions or even authorise the use of force to maintain or restore international peace and security.

8 replies on “SVG gets holiday to mark Security Council election”