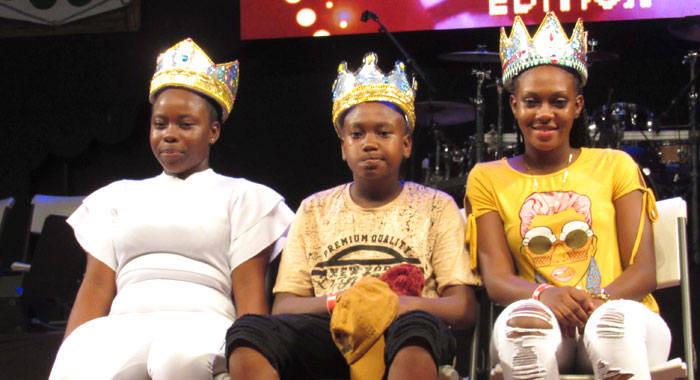 Siblings Kristian and Kristiana Christopher, on Teusday, won the Primary and Secondary School segments of the Junior Calypso Competition, with Kristian winning his fifth consecutive crown.

They returned to a condition that was broken last year, for the first time since 2016, when the duo had each won at least one crown in the competition.

Tuesday’s win was Kristiana’s seventh in the competition and her second at the secondary level.

In the soca segment of the show, which groups both primary and secondary school students, Teshia “Short T” Andrews, of Bishop’s College Kingstown, retained her crown, with the song, “Peace”.

Kristian, who is 11 years old and uses the stage name “Lil Kris”, represented the Layou Government School for the last time in the competition.

He intends to attend the St. Vincent Grammar School in September, having performed well in this year’s Caribbean Primary Exit Assessment.

“I feel very happy, very proud of winning five in a row,” he told iWitness News shortly after being crowned at Victoria Park.

His father, Wollis Christopher, wrote his song, “We Footprints Large”.

The song celebrated the achievements of St. Vincent and the Grenadines — notwithstanding its small size in terms of both landmass and population — under the Unity Labour Party administration, which is led by Prime Minister Ralph Gonsalves.

Among these was the country’s election, last month, as a non-permanent member of the United Nations Security Council — the smallest country ever to be so elected.

Omani Cupid  of Fair Hall Primary was second with “Save Mother Earth”, while Calique “King Dré” Lewis, of Calder Government School, was third, with his rendition, “A-Team”.

Meanwhile, Kristiana, a student of Thomas Saunders Secondary School, said she felt “excited about winning as I worked very hard.

“I feel very great and proud of myself,” the bard, who uses the sobriquet “Singing Kristy”, told iWitness News.

Kristiana performed the song “The Global Monster”, a song that highlighted the impact of the climate change.

Her father also wrote the song.

The singing siblings’, experience shone through on the state on Tuesday, in their delivery, diction, and stagecraft.

Christopher Bacchus, of St. Martin’s Secondary, was second with “It Taking Too Long”, while, Ronella “Singing Ronella” Lavia, of West St. George Secondary, placed third, with her song, “I Love My Calypso”.

Speaking to iWitness shortly after his children’s victory, Christopher, a retired teacher, said he wrote all the songs his children have ever performed.

He said he has also and assisted many students of the Bethel High School, but gets his best success from his children.

Christopher said that he came up with the topics for his songs because he does a lot of reading.

In the soca category of the competition, Grennon “Buffa-G” Nero of Sandy Bay Secondary, was second with “Kick Dust”, while Singing Kristy place third, with “Shell Down De Place”.