Couple ends up in court after row over alleged infidelity 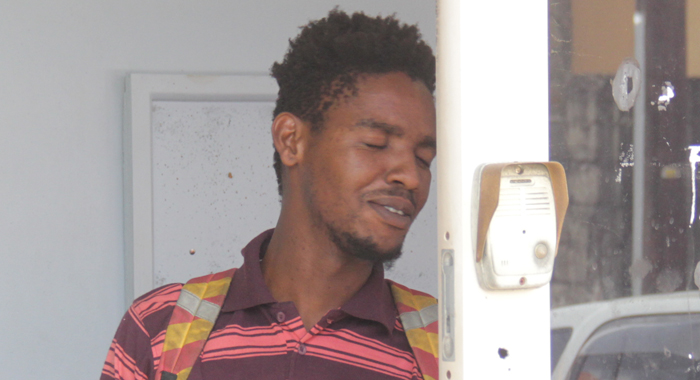 A 24-year-old Union Island man broke down in tears in court on Wednesday as he spoke about how hurt he was when his then girlfriend allegedly told him she had been unfaithful.

Anthony Franklyn, a 24-year-old bartender, told the court he threw his then girlfriend, Cindy Bynoe, out of their rented home after she told him “she gave her aunty husband her c**t to suck for a phone”.

Bynoe did not deny the claim by the Clifton man with whom she has a 9-month-old child.

They were in a relationship for almost two years.

At the Kingstown Magistrate’s Court, the man pleaded guilty to charges that on June 30 at Clifton, Union Island, he damaged Bynoe’s LG stereo system, value EC$800, and had in his possession an offensive weapon, to wit, a cutlass.

The court heard that the duo were in a common-law relationship and were living together.

On June 30, about 8:45 a.m., they got into an argument and Franklyn told Bynoe to leave his home and to take her belongings with her.

He began to put her belongings outside and then took up the stereo system and placed it on a wall from which it fell and broke.

The argument continued as Franklyn took up a cutlass and went into the public road, where he continued to argue and proceeded to threaten Bynoe.

The police were called in and Franklyn was taken into custody. He was cautioned and admitted to the offence.

Franklyn told the court that he agrees with the facts that were presented to the court.

The man told the court that he told Bynoe to leave because of what she told him about him about being unfaithful.

However, Bynoe told the court she was the one who was renting that place and had paid the EC$500 deposit as well as the first two months’ rent.

She said they had been together for almost two years.

The woman said that she did don’t want to “lock up” Franklyn as she has a child with him and only needed payment for her stereo system.

“You don’t want me to do anything to him other than to get you back your stuff,” Burnett said to Bynoe.

He, however, said that Franklyn might give her back her belongings but he would remain the same person.

“You would not want me to do anything to attempt to change him, all you want back is your stuff,” the magistrate said.

He, however, said he would do more than give back Bynoe back her belongings because he wants Franklyn to change.

He said Franklyn might leave Bynoe and treat another woman the same way if the court does not “attempt to bend him today”.

The woman said that Franklyn had abused her before.

Asked why he was treating the woman that way, “Franklyn said, “Wey she tell me, it hurt my feelings.”

He started to cry as he spoke the words.

The magistrate suggested to the man that he also tells the woman things that hurt her feelings.

Franklyn told the court that Bynoe drinks a lot of rum and does not pay attention to the children.

“What about you? You are a good boy?” Burnett asked.

Franklyn said he is a good boy.

But Bynoe said that Franklyn is unfaithful to her, saying that Franklyn’s uncle told her “a night he paro (had sex with) this girl from Dorsetshire Hill”

She also said something about “$5” and “cocaine” but the complete sentence was inaudible.

Franklyn did not deny Bynoe’s claims.

Franklyn told the court that he and Bynoe were no longer together.

Lawyer Vynnette Frederick, who was at the bar table but was not involved in the case, rose and asked whether the court could order that the duo undergo counselling.

She noted that they were both parents of a child, adding that looking at Franklyn’s demeanour, there seems to be something else happening.

Burnett ordered Franklyn to compensate Bynoe in the sum of EC$800 by Oct. 30 or spend three months in prison.

He was also bonded to keep the peace for one year in the sum of EC$3,000 or serve nine months in prison.

The magistrate also ordered Franklyn and Bynoe to each undergo six months of counselling.