Man disgraces himself by stealing $1 pudding, other items

‘And for a grown man, a 42-year told man, to have found himself stealing a piece of pudding and items minuscule, tells me that he had a propensity for stealing.’ 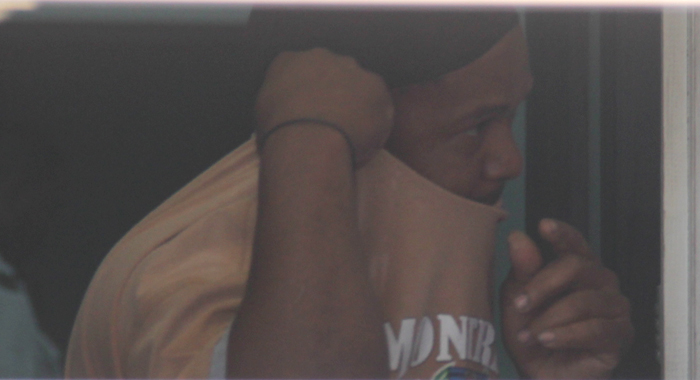 Casmore Fraser attempts to hide his face as he leaves the Kingstown Magistrate’s Court on Wednesday. (iWN photo)

Senior Magistrate Rickie Burnett, on Wednesday, told a 42-year-old father of three teenage children that he had embarrassed himself and his children when he stole a number of items, including a $1 slice of pudding from a Kingstown store.

“You have to stop this… You are embarrassing [your children],” Burnett told Casmore Fraser, of Sion Hill, after sentencing him at the Kingstown Magistrate’s Court.

He noted that journalists were in courtroom and would write about the man’s crime.

“Your children are going to read it. Don’t do that to them. Make this the last time that you are standing convicted for the offence of theft,” Burnett said, and urged Fraser to take his advice and turn his life around.

“You embarrass me as well. Look at what you are getting a record for,” Burnett said.

The facts are that on Wednesday at about 8:30 a.m., the security guard at Coreas Food Mart, acting on information from another customer, kept Fraser under close observation.
The security guard saw Fraser pick up a slice of pudding and go to the cashier.

It appeared that he paid for the pudding, and then went to the exit door, passing the guard, who stopped him and told him of her observation.

The security guard invited Fraser to the general office, where he met the manager who asked to search his bag.
The items were found inside Fraser’s bag.

Fraser told the security guard that he took the items.

The police were called in and Constable Sam reviewed the surveillance footage, which showed Fraser taking the items and putting them in his bag.

Fraser was taken to the Central Police Station, where he told police, “I take them, I don’t have any money because things rough.”

Fraser told the court he works off and on as an auto mechanic and last worked last week Thursday and was paid EC$175, which he said he used to pay rent and used some for his children, ages11, 13, and 17.

Asked to explain his behaviour, Fraser said he was sorry.

In 2015, Fraser was convicted of stealing a grass trimming line, value EC$15.

The magistrate said the man was in the habit of stealing from stores.

Burnett said the man was convicted before but said he could not look at those convictions, in keeping with the dictates of the Court of Appeal.

He, however, said he could look at the man’s record to see whether his behaviour has changed.

Fraser told the court he was going to take the items to his children.
“Well, you can’t steal to maintain your children. That’s not acceptable,” Burnett said.

He noted that Fraser pleaded guilty at the first opportunity.

Burnett said such crimes occur almost every day in Kingstown.

He asked counsel Michelle Fife and Senior Prosecutor Adolphus Delplesche, who were at the bar table but were not involved in the case, to address him on sentencing.

Fife said that, in the circumstances, she was asking for leniency, noting that the defendant is a father of three children and works intermittently.

She pointed out that he had said that the items he stole were for his children.

The lawyer said that while the court does not want to send to the public a message that it is okay to steal, it has to be noted that the items are not luxury items, but basic food items.

“Quite often, we take the basic amenities of life, like a safe place to live, enough money to buy food, accessibility to food for granted, but there are some people who are labouring under difficulties where in which they feel compelled to do activities which are unbecoming, out of character.”

She said that while the court cannot consider the man’s previous convictions in relation to the offence, it could speak to a tendency to turn to illegal activities when he feels cornered or does not have enough.

The lawyer said that if the court is minded to impose a prison sentence, it should not be unduly long.

Fife said that she would recommend another sentence that would allow Fraser to continue to be an effective father.

In his submission, Delplesche said that sentencing in matters of that nature is always difficult.

The prosecutor said that mechanics are in demand in SVG because the country has a lot of vehicles.

“And for a grown man, a 42-year told man, to have found himself stealing a piece of pudding and items minuscule, tells me that he had a propensity for stealing,” Delplesche said, noting that Fraser received wages last week.

Burnett sentenced Fraser to three months in prison, suspended for one year.

This means that if he is convicted of an offence within the next year, he would automatically go to prison for three months, in addition to any sentence imposed for that offence.

9 replies on “Man disgraces himself by stealing $1 pudding, other items”