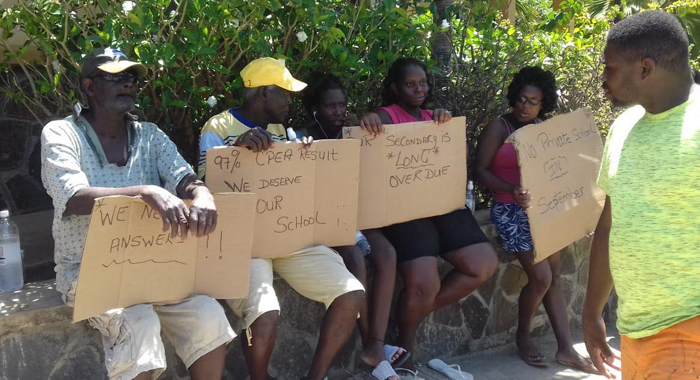 Prime Minister Ralph Gonsalves has noted the recent agitation in Canouan, where residents protested and expressed concern about whether a secondary school will be built for September, as promised by the government.

It is not the first time in the past decade that the government has promised the construction of a secondary school on the southern Grenadine island, whose nearest high school is on Union Island.

In the 2010 election manifesto, Gonsalves’ Unity Labour Party promised to construct a secondary school on Canouan.

Gonsalves said on radio, on Thursday, that residents of the island were “rightly concerned about what is happening to the secondary education” on Canouan.

He said that maybe if the Ministry of Education were consulted, residents would have been informed.

He noted that his government had pledged that it would have secondary education in Canouan starting in September.

“And you know we had been working out with the developers in the north, Mr. Pignataro, where the developers were providing the resources to do the construction, a campus would be there where the primary school is so that you will have a primary school and a secondary school with an IT laboratory and science lab, a library and auditorium and a Montessori pre-school which would be open to all children free of charge.”

He said construction started with the students who were in the private Pelican pre-school and primary school, who will be absorbed into the overall school premises.

“But I think persons have been seeing that there has been some delay in the construction,” the prime minister said, adding that he had spoken to the developers “and they said they would be on target to complete in September”.

“But, in any event, even if all the facilities are not completed, we have enough space to enrol the approximately 20 students in the secondary school and they will require a minimum of five teachers,” Gonsalves said on Star FM, his party’s radio station.

“They will be selected strategically so that, in fact, they are being selected strategically so that each one can teach at least three core areas, the typical subject offerings at the form 1 level – the English A and B, mathematics, integrated science, history, geography, information technology, Spanish or French, physical education, health and family life education, music, art and religious education.”

Gonsalves said his government has approved almost a quarter million dollars for recurrent expenses related to providing the education for the academic year.

“So I just want to assure the nation and the people in Canouan that we are proceeding as we promise. I myself will go down and see how everything is coming on and how the first year of the secondary school children will fit in…

“Now, clearly, if the build out in the new premises which are being built is completed by September, we will be able to do even more, but we are keeping our promise to the people of Canouan. So I just want to make that point,” he said.