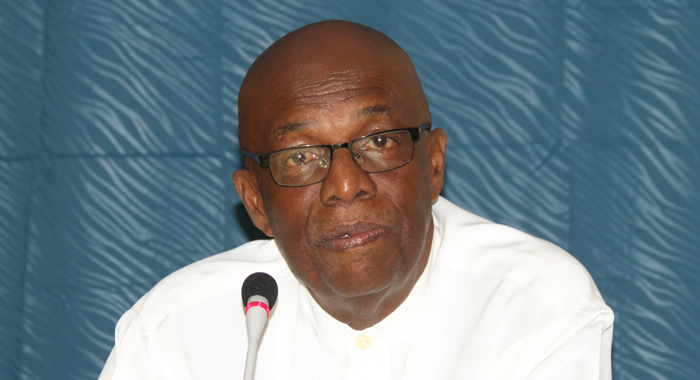 An opposition lawmaker says the recent decision of the Caribbean Development Bank’s (CDB) to withdraw funding for a project in St. Vincent and the Grenadines is confirmation that Kingstown has broken the bank’s rules for the award of contracts.

“That is, you violated the rules that apply to the contract,” Arnhim Eustace, a former senior executive of the CDB said in exploring what it means when the bank declares misprocurement.

The bank has ordered the Government of SVG to repay all monies drawn down in relation to the “Yarabaqua River Defence” project, which was awarded to Reliable Construction Ltd., whose bid was $1,421,576.

The CDB’s decision came after an investigation triggered by a letter of objection from Bally and Bally Investments Ltd., one of the firms which had tendered for the contract.

“Therefore, there has either been a false declaration made in their forms or unlawful and unfair intervention by someone of influence on their behalf,” he said in his letter.

Balcombe was, in 2005, a candidate for the opposition New Democratic Party, under Eustace’s leadership but has stated publicly, including on a radio programme supportive of the Unity Labour Party government, that he is no longer interested in politics and is concentrating on his business.

Speaking on his weekly radio programme on NICE Radio on Tuesday, Eustace, who is also Member of Parliament for East Kingstown, said he spoke to a recently retired treasurer of the bank.

“… he, himself, could not remember a case like that, where a country was forced to pay back a loan,” Eustace said.

He said he could not recall such a case in his own 16-year stint at the CDB.

“I am ashamed, I’m telling you as somebody who worked there and had a say in those guidelines.

“I am ashamed of what has happened, that here in St. Vincent, the CDB, who had given billions of dollars in loans will find us wanting, violating the rules, playing politics at the expense of the people of St. Vincent and the Grenadines. Now, the people have to pay back the money,” said Eustace, who is a former prime minister, minister of finance, and opposition leader.

“You know what that does to our reputation as a country, what it does to the government, the image it put out there about St. Vincent and the Grenadines?”

Eustace noted that the board of directors of the CDB is composed of persons from a number of countries, including England, Germany, France, Venezuela, and Columbia.

“They come there to the meetings and they help to approve the projects.

“So when that happens, it is several countries that know what wutlissness (worthlessness) we did. It does not stand well for us. It sends an image of corruption and the government had to take the responsibility,” Eustace said.

He noted that the contractors and consultants for the project have to be selected by the Tenders Board in Kingstown, which has to be familiar with CDB rules.

Commenting on Balcombe’s letter which triggered the investigation that led to the withdrawal of the funds, Eustace said:

“Let us understand the situation closely, you know. That same letter and the consultant who wrote that letter, he was protesting and saying that they were breaking CDB rules and CDB turned around and agreed with him and said the people who were doing the work didn’t know what they were doing and asked back for their money. You see, you have to be clean….

“Party politics. You give the job to your friend, not to the consultant who put in the best bid. And that’s what caused all this…

“It is very embarrassing. I tell you, as a former director of Projects [at the CDB], I am so upset to see this happening,” he said.

“It is dangerous when you get that kind of reputation from the bank,” Eustace added.