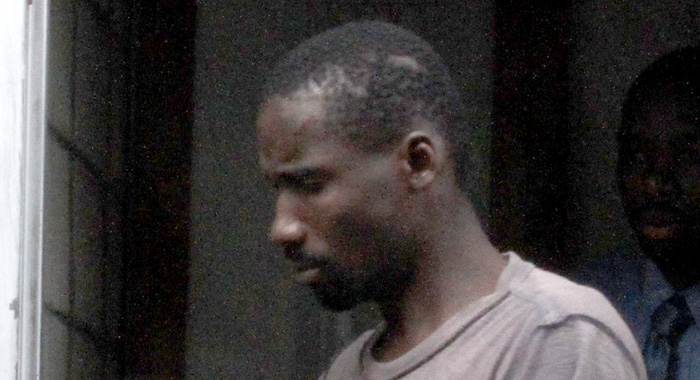 A Rillan Hill man was, on Friday, sentenced for the second time this year for attempting to murder a woman after breaking into her home.

Grafton McDowall, 32, was sentenced to 20 years in jail for attempting to murder fellow villager, retired educator Ethel King on April 3, 2017.

He inflicted multiple stab wounds on the woman, who had suddenly realised that the man was in her home sometime around 11 p.m.

“Papa, you come into my house to kill me for what reason?” King asked the man during the attack, referring to him by one of his aliases.

McDowall is also known as Saddam.

On June 25, a jury convicted McDowall of attempted murder and aggravated burglary in connection with the attack.

King had been watching television on the upper floor of her two-story home when a noise caused her to look around.

Almost immediately, McDowall, who was wearing a mask and had only his eyes exposed, began to stab at king with a pair of scissors he had brought with him.

King was able to avoid most of the stab wounds and was able to pull the mask from McDowall’s face.

She suffered a serious stab to the face that damaged her cheekbone and caused dental trauma.

With Friday’s sentence, McDowall saw his prison clock reset to day 1 — four months after he had been sentenced to 15 years in prison for a similar crime.

When Justice Brian Cottle handed down the 15-year sentence on Feb. 22, 2019, the judge had also ordered that the one year and one month that he had spent on remand be deducted from the sentence.

The sentence was imposed after McDowall pleaded guilty to attempted murder and aggravated burglary in connection with his Jan. 14, 2016 attack on fellow villager, Lorna Daniel.

McDowall attacked the woman, who was helping to care for his elderly grandmother, and stabbed her 13 times at his grandmother’s house, located a few hundred metres from where King lives.

However, unlike the family dispute that might have led to his aggression towards Daniel, the court was at a loss as to why McDowall had attacked King, a prominent resident of the South Leeward village, whom he has known all his life.

In February, Justice Cottle had also ordered that McDowall continue to undergo psychotherapy and receive medication in light of reports from prison authorities about his aggression.

The man had been in fights with other prisoners four times since being on remand.

The effect of this is that McDowall will spend 20 years in prison, beginning last Friday.

McDowall has a history of crime and also has convictions for burglary, possession of an offensive weapon, and assault occasioning bodily harm, assault, and damage to property.

He made headlines in 2012 when he covered himself in his faeces to aid in his escape from custody at the Kingstown Magistrate’s Court.

McDowall made headlines again in 2017, when he stepped forward at the last minute on June 4 and asked to be baptised.

He was among 28 inmates were baptised at Her Majesty’s Prisons and the Belle Isle Correctional Facility on May 28 and June 4.

Most of the prisoners made a commitment to follow Christ during a series of meetings held earlier that year and their baptisms were scheduled for May 28 and June 4.

4 replies on “‘Saddam’ gets 20 years for second attempted murder”