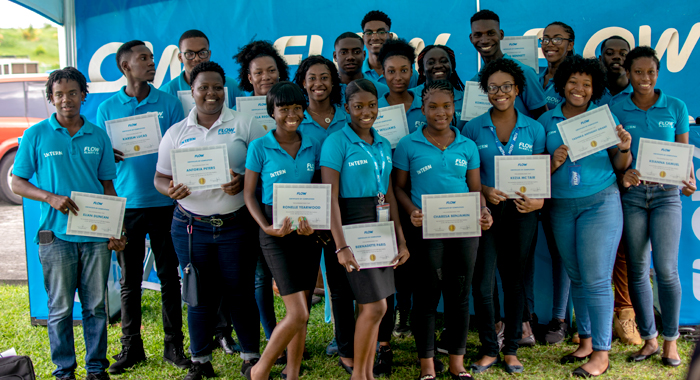 The Sales Academy was an initiative of Sales and Marketing department to prepare young adults for the world of work. Nikala Williams hosted the event while speakers included Consumer Sales manager Andrea Liverpool and Door-to-Door Sales manager Kimisha Horne.

Williams provided opening remarks in the absence of Country Manager, Wayne Hull who was unavailable but sent his best wishes to the graduates.

Liverpool noted that the idea for the Sales Academy was came out of a need for more competent entry-level employees.

She further noted that while students excel academically, entering the workforce posed many challenges such as accountability and workplace etiquette. Liverpool also said that the graduates had helped the company meet target sales and help persons to share memorable moments by providing customers with a variety of services offered by FLOW.

She praised Horne for her willingness to accept the challenge of guiding more than young persons while completing her day-to-day obligations.

For her part, Horne said that while spearheading the Sales Academy was daunting, she was grateful for the help and support of Liverpool and her core team.

Horne stated that those first few weeks posed many challenges for the graduates as well as seasoned staff members, adding that many bonds were formed, and lifelong memories were created.

Horne further stated that the individuals she now looked upon were not the people they were a few months earlier and praised the graduates for their growth and wished them continued success in their endeavors.

She also announced that two graduates — Kareem Lucas and Oji Sutherland –were going to be offered one-year contracts for exceptional performances.

Horne said that deciding who the two were going to be was not an easy task as so many graduates perform above and beyond expectations.

The ceremony culminated with the presentation of certificates and an announcement that the Sales academy will continue for another month where the incoming Sales Academy students were formally welcomed.

Attendees, including parents, guardians and the press, were treated to musical tributes and a cocktail party.