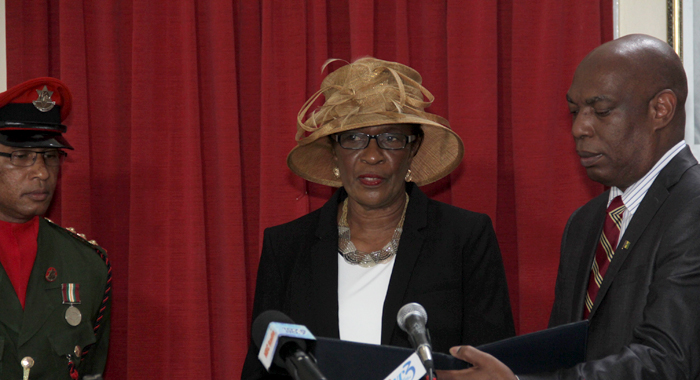 On the day commemorating the end of Trans-Atlantic Slavery, St. Vincent and the Grenadines (SVG) was given a tone-deaf reminder of its colonial past with the playing of “God Save The Queen” at a government function on Thursday.

The event was the swearing into office of the country’s first female governor general, Susan Dougan at Government House, in Kingstown.

The new governor general then moved to inspect a guard of honour, a ceremony that included the lowering of National Flag of SVG and the simultaneous raising of the Governor General’s insignia.

The inspection of the guard of honour included a Royal Salute, in which the Royal SVG Police Force Band played “God Save the Queen”, followed by the National Anthem of SVG.

Some persons have noted that the playing of the British National Anthem was unavoidable at such an event in light of the system of governance in SVG.

SVG retains Queen Elizabeth II as its head of state and a governor general represents her.

However, other observers have noted that the event could have taken place on another day, other than the one celebrating the end of slavery.

Some persons have noted that such an event could have been altogether avoided.

It would not have been necessary had Vincentians not rejected, in a 2009 referendum, proposed changes to the Constitution that the British left at independence in 1979.

In 2009, the Gonsalves government urged Vincentians to support the proposed changes, saying, among other things, that the country should become a republic to complete its democracy.

Yet, 10 years later, a Government led by Gonsalves chose to install a new representative of the Queen on Emancipation Day.

The question remains, however, regarding why Aug. 1 — Emancipation Day — was chosen for the installation of a new governor general.

Last month, Gonsalves announced that Sir Frederick, who became governor general on Sept. 2, 2002, had informed him that he wanted to demit office on July 31, for health reasons.

Persons who argue that Dougan had to be installed on Aug. 1, so that an important constitutional office would not be left vacant, have to confront the question of whether the office had been vacant between 12 midnight on July 31 when Sir Frederick’s tenure ended and 9 a.m. on Aug.1, when Dougan took the relevant oaths.

The Constitution of SVG, under the rubric “Acting Governor-General”, says: