SVG embassy shows ‘maturation of the excellent relations’ with Taiwan 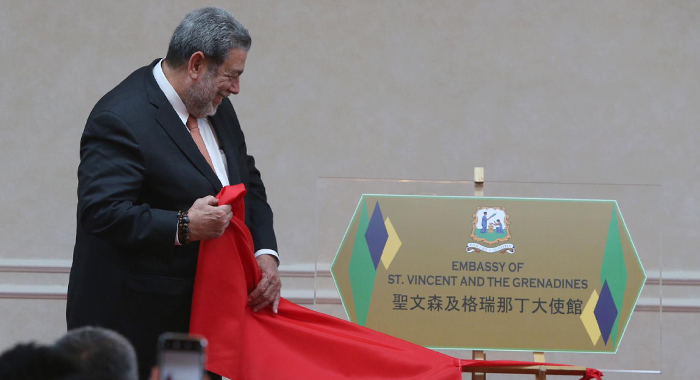 Prime Minister of St. Vincent and the Grenadines unveils a plaque at the official opening of his country’s embassy in Taiwan on Thursday. (Photo: Taiwan CNA)

St. Vincent and the Grenadines opened its embassy in Taiwan on Thursday (Wednesday night SVG time), with Prime Minister Ralph Gonsalves saying the move is “a manifestation of the process of maturation of the excellent relations” between both countries.

Gonsalves told the opening ceremony, which took place on his birthday and Chinese Father’s Day, that he expects that the embassy will contribute to a further strengthening of relation “and add greater value to the outcome of our two counties bilateral and multilateral diplomatic efforts”.

He said that the setting up an embassy or mission in another country is in part a political statement of the high regard in which the relations are held.

SVG and Taiwan established diplomatic relations in 1981 and Taipei has had an embassy in Kingstown for two decades, although it had a mission there for 38 years.

With the opening of the SVG embassy, Kingstown joins Taiwan’s other 17 allies in having a diplomatic presence in Taipei.

Gonsalves said that SVG has diplomatic missions at the United Nation, in London, Cuba and Venezuela, Washington, DC, Paris, Brussels, and Geneva.

He said Kingstown also has consular offices in Toronto and New York and non-resident ambassadors and honorary consuls in many other countries worldwide.

The Organisation of Eastern Caribbean States (OECS) has decided to make a special diplomatic demarche, with missions in several African countries, the prime minister said.

“In this context, it is, thus, an important decision to set up an embassy in Taiwan,” Gonsalves said and thanked the government and people of Taiwan “for facilitating and welcoming the establishment of this embassy”.

He said that the act is a reciprocal one, noting that Taiwan has had a diplomatic presence in SVG for 38 years.

“The establishment of an embassy in Taiwan takes place at a time when the global political economy is awash with dangerous complication and contradictions. Multilateralism, constructive dialogue and the quest for peace, security and shared prosperity are crucial in addressing the complications and challenges,” Gonsalves said.

He said that as archipelagic states, SVG and Taiwan are particularly vulnerable to “the existential threat of climate change”.

“Moreover, in each of our respective geographic regions, there are tensions and conflicts which demand especial care and maturity in the process of peaceful resolution.

“And at the core of it all are our respective country’s national interest constrained always within the boundaries of international law, multilateralism and the wellbeing of the global family and civilised life and living.

“Today, this day, is truly a day that the Lord has made. Let us rejoice and be glad in it. It’s my special honour, and I feel humbled by it, to declare formally open the embassy of St. Vincent and the Grenadines in the Republic of China (Taiwan),” he said.

“The embassy bears testament to the fact that our bilateral relations have reached a major milestone, thereby opening a new chapter in our future cooperation.”

He said Taipei looks forward to working with its Vincentian counterpart to promote the sustainable development of both countries and the well-being of their people.

The vice president said he was anticipating a deepening and more diversified partnership through the efforts of St. Vincent’s ambassador in Taiwan, Andrea Bowman.

The embassy is located in a building that accommodates a number of other embassies belonging to Taiwan’s Pacific and Caribbean allies.

Gonsalves opened the embassy during a one-week visit to Taiwan, during which he will hold meeting with   Taiwanese officials, including President Tsai Ing-wen

The prime minister’s delegation includes his wife, Eloise, and their daughter, Isis, who he said was there in her capacity as as counsellor at the SVG UN mission.

He said SVG’s UN Ambassador I. Rhonda King has assigned Isis the role of political coordinator at the Security Council.

Cultural Ambassador Shaunnelle McKenzie, who is the SVG’s National Calypso Monarch and Queen of Calypso 2019, sang at the opening of the embassy.

Gonsalves noted that Mineva Glasgow, a member of the delegation, has tremendous expertise in social security, adding, “and I believe that it’s not a long time from now that she would be in the parliament of St. Vincent and the Grenadines”.

Glasgow is said to have been fingered to replace Jomo Thomas as the Unity Labour Party’s candidate in South Leeward for the next general elections, widely expected before the end of 2020, ahead of the March 2021 constitutional deadline.

The team also includes Roslyn Johnny, a senior teacher at the South Rivers Methodist School, who the prime minister said is one of his advisors in his constituency, and Sergeant Godwin Charles, a member of the prime minister’s security detail.