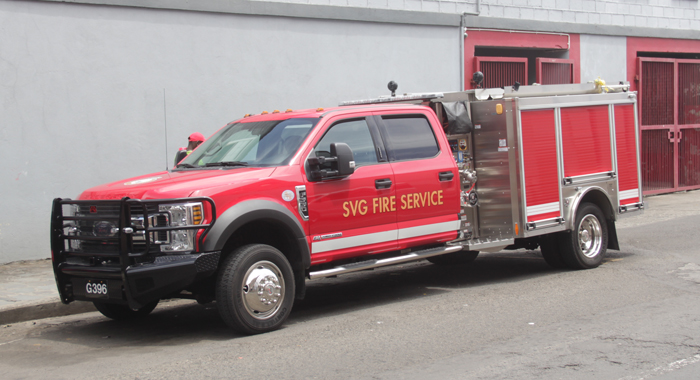 One of the firetrucks that the government purchased. (iWN photo)

The Royal St. Vincent and the Grenadines Police Force has begun to decentralise the nation’s fire service, which remains an arm of the constabulary.

Commissioner of Police, Colin John, told iWitness News last week Tuesday that a fire tender and officers have been assigned to Georgetown, in eastern St. Vincent.

He said a tender will be sent to Barrouallie, on St. Vincent’s western coast, as soon as existing accommodation to house the vehicle and officers is reconfigured.

He said that the government has purchased two new fire tenders and two were donated to the country through the efforts of SVG’s consul general in Canada, Fitz Huggins.

John said that the other fire tenders in the nation’s fleet were pretty old, with some having been in service for two decades.

He said that they remain operational although they are at the end of their lifespan.

John further said that the eight sports utility vehicles (SUVs) that the force received from Taiwan recently have been distributed to the department and out stations.

He said he would not want to detail the distributions as some of the vehicles, for operational reasons, are unmarked.

He said that the Taiwanese have also donated funds to purchase two large motorbikes for the police force.

The motorcycles are being procured through a local dealer and should arrive in the state by October, the police chief said.

One reply on “Fire service being decentralised”