One funeral attack accused freed; others to know fate 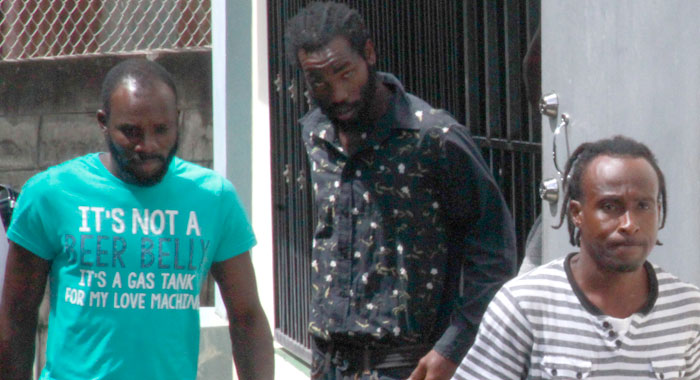 Timron Padmore, left, was freed on Monday of the charges against him. He is seen here with accused Daniel Daniel, left, and Junior Charles, on their way to court. in May 2018 (iWN photo)

One of the five men charged with wounding a Barrouallie man at a funeral in Chauncey last year has been freed of the charges against him.

Prosecutor Police Constable Corlene Samuel withdrew the charges against Timron “Homey” Padmore, 38, of Rillan Hill, after he made a no-case submission at the Kingstown Magistrate Court on Monday.

Senior Magistrate Rickie Burnett commended the man on the way he represented himself and reserved his decision on the no case submission that the lawyer for the four other accused made on their behalf.

The senior magistrate will hand down his decision on Nov. 14, 2019.

Padmore was charged that on May 27, 2018 at the Chauncey Cemetery, he was in possession of an offensive weapon, to wit a stone.

He was being tried jointly with Kazim “Meds” Alexander, 21, Dane Daniel, 36, Junior “Trunkie” Charles, 30, and Jeronza Thomas, all of Chauncey, that on May 27, 2018 at the Chauncey Cemetery, they did cause a disturbance to an assembly lawfully engaged in the performance of religious ceremony, to wit “the funeral service of Je-Tonnia Thomas of Chauncey”.

The men were also charged that on the same date and place they unlawfully and maliciously wounded Paul Stephens of Barrouallie.

In his no case submission, Padmore told the court that the prosecution had failed to present any evidence that he was involved in the matter.

Regarding the offensive weapon charged, he said none of the witnesses identified him as being in possession of a stone.

He asked the court where is the stone he is alleged to have had, noting that he had suggested during cross examination of the investigator, Detective Corporal Philbert Chambers, that the stone was “an imaginary stone”.

In his evidence in chief, Chambers read a caution station that Daniel gave in the presence of a justice of the peace.

In the statement, Daniel said that while at the funeral, he saw some unknown persons fighting.

He said that during the fight, some persons were pulling back two of his cousins.

Daniel said he dropped the stone that he had in his hand and that he saw some people pulling a tall man.

Meanwhile, in his caution statement, Thomas said he saw a fight break out between Stephens and a couple men at the funeral.

He said he saw Stephens running towards him so he thought that Stephens was going to do him something.

“So me just back him off with me hand,” Thomas said.

Thomas said that two of his cousins pulled him back “and de war bin still ah go on”, adding that “the war start” when somebody pelted a stone and Stephens ran towards him.

Meanwhile, Padmore maintained that Chambers had told him that he had been charged because of the number of stones that had been pelted during the fracas.

The attack on Stephens was recorded on a mobile device and circulated but was not tendered into evidence.

Padmore told the court that Pastor Sheldon Nichols, who officiated at the funeral, had finished with his rituals when the “fracas” broke out.

He further said that Police Constable Millington, a resident of the area who told the court that she witnessed the incident, said that she did not recognise him as one of the persons involved.

“I stand before the court to defend myself to speak the truth,” Padmore said. “My assumption is that this is a case of mistaken identity.”

Regarding the wounding charge, Padmore maintained that he was “not a part of that”, adding that there was no evidence to substantiate the charge.

He noted that Chambers had said under cross examination that when he (Padmore) was charged, he strongly denied having committed the offence.

“The police are the first magistrate to make the work easier for the prosecutor and the magistrate,” Padmore said, adding that it makes no sense charging someone without evidence.

“The prosecution has failed miserably in their attempt to produce evidence against me,” Padmore said.

He said that the virtual complainant in the matter never identified him as being part of the incident, doing so only in court.

In his submission on behalf of his clients, Alexander and Junior Charles, lawyer Ronald “Ronnie” Marks said that the court was “in very real danger of allowing extraneous evidence to enter into the matter”.

He said there has never been any proper identification made of any of the accused men.

Marks said that Stephen’s niece, Kayana Franklyn, of Coulls Hill, who testified for the crown, was not present when the incident took place.

He said that her evidence collapsed under cross examination, admitting that she was one of the first persons who left when the fracas began.

“She saw the video the Monday. By the Wednesday, she was an eye witness,” he said, repeating a point made during his cross examination of the witness.

Marks joined with fellow defence counsel, Linton Lewis, who represents Daniel in saying that the funeral had ended when the incident took place.

“If the person officiating say the funeral was finished, it was concluded,” adding that there was no evidence that his clients wounded Stephens.

In response to Marks and Lewis’ no case submission, Samuel asked the court to consider the evidence of the witnesses, including Stephen, who she said told the court what was done to him and by whom.

The prosecutor noted that Millington had told the court that she saw Charles, Alexander, Daniel, and Thomas at the scene and detailed what they allegedly did to Stephens.

The men allegedly committed the offence at the funeral of Je-Tonnia Thomas, 32, at the Chauncey Cemetery, on May 27, 2018.

Thomas, Stephens’ fiancée and mother of his child, was found dead on May 10, 2018, at their Keartons home.

At the time of the woman’s death, Stephen had said that she was his wife, but it later emerged that they were never legally married

Police later said that the dead woman was not Thomas and an autopsy revealed that Thomas died of heart failure, resulting from an undiagnosed heart condition that had made the organ larger than normal.

Stephens was savagely beaten during a mob attack at the Chauncey Cemetery on the day that Thomas was buried.