Woman bonded for wounding in case of unrequited love 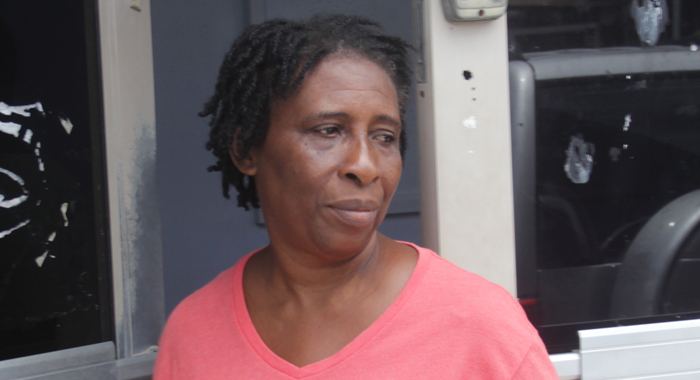 Marian Ghent leaves the Kingstown Magistrate’s Court on Tuesday after being bonded for wounding her ex-lover. (iWN photo)

A Belmont man told the Kingstown Magistrate’s Court on Tuesday he could not understand why a woman he loves who does not feel the same way about him and had wounded him, wants to be with another man who doesn’t love her and had beaten her.

Prosecutor Police Constable Corlene Samuel was quick to point out to Desmond Horne, 45, the irony in his statement.

The matter unfolded in the case in which Marian Ghent, 51, of Sally Spring, pleaded guilty to wounding Horne, her former lover, in Sally Spring, last Friday, Aug. 9.

The case was one of a man finding it difficult to let go of a woman with whom he had discussed whether it would be better to cast a spell so that another man — whom she reportedly loves — would fall to his death or spend the rest of his life in prison.

Horne admitted that last Friday he called Ghent a “dog”.

“Yuh wah me fuh kill yo man and look, yuh gone back by the man. That is what hurt she,” he told the court of his reason for accusing Ghent in a way that provoked her.

Senior Magistrate Rickie Burnett, who was adjudicating, told the parties that they were introducing things that might be criminal.

“Taking the life of someone is a criminal offence, you know, and that came out as well,” he said, adding that the duo needs to look at their lives as well.

“You all can’t give life so don’t contemplate taking others’,” he warned, adding that the statement disturbed him.

Horne said that when Ghent is by him he does not want her to get a bruise or a cut.

“And watch how she brutalise me,” he said, referring to his injuries.

Ghent and Horne both admitted to having discussed the means by which the other man’s life could be taken.  They both also said they Christians.

Horne told the court that Ghent had asked him for money to give to an obeah man (sorcerer) to work obeah (cast a spell) and to kill the other man.

He told the court that he doesn’t believe in going to church and “going down that road dey”.

But Ghent said it was Horne who offered her the money to finance the deed.

Horne, however, contended that he offered her the money and told her to go to the pointer (Spiritual Baptist cleric) and ask him to cause the man to spend his lifetime in jail.

“Spending he life time in jail and killing is two different thing,” Horne told the court.

He said that Ghent wanted to go to the “pointer” to work obeah and cause the man to fall off a house roof and die.

“Ah say, ‘Duh go down da’ road de.  Ah say, ‘Hear the best thing fuh do. If anything, go to the pointer, leh the pointer do wha’soever and he spend he lifetime in jail rather than kill him.’”

Horne and Ghent had been involved in a relationship for two years, during which time he developed a close friendship with the woman’s adult children.

As a result, the woman’s children would invite him over. And that was the case last Friday, when he went to the home of one of the woman’s daughters, who is married.

However, Ghent came to the house and met Horne there and an argument ensued.

She threw what she later told investigators was seasoning in Horne’s face and struck him with an object in his head, resulting in injuries.

Horne said that Ghent had struck him with a rolling pin, but she said it was a wooden pot spoon.

He also claimed that she had chased him down with a cutlass, however, Ghent’s son-in-law, who witnessed the altercation, told police that he did not see this.

Ghent told the court that she had struck Horne because of the things that he does to her.

And while Horne confessed that he still loves Ghent, he asked the magistrate to send her to prison “to teach she a lesson”, in the hope that she would turn from her “ignorance and arrogance and the lifestyle she wah live”, with which he said he could not cope.

The man said that he can trust the woman with any amount of money in his house but she is “ignorant”.

Horne complained to the court that because of Ghent, the pastor at Miracle Church in Arnos Vale, where he and Ghent are congregants,  removed him from the music team.

Ghent, however, maintained that Horne was lying because she did not want to be any longer with him.

“Yuh wah force me fuh dey with yuh if ah doh wah yuh?” the woman asked, who also told the court that Horne said if he cannot get her, no one else would.

Horne said he is in love with Ghent and feels happy around her.

“Nuff people does say, ‘Yuh’s ah Isaac [Hunt] or wah?” the wounded man told the court. The reference to “Isaac Hunt” is a catchy alliteration in the Caribbean vernacular with humorous, vulgar and derogatory intent. It is drawn from a 2019 soca music rendition and is used against others to amuse persons within earshot.

He said the pastor and the members of the church have told him to let Ghent go.

“Everybody tell me that. But I love her why I ain’t let her go,” Horne said, adding that the pastor also told him not to interfere with the woman.

He said that many members of the church are laughing at him because of the woman, but he feels happy around her.

Horne said the pastor was going to throw him out of the church before Ghent got baptised some time ago.

“And much more to this again.  Pastor going throw me out,” he said, triggering some giggles in the court, which an orderly quickly quelled with a firm “Order in court!”

The prosecutor pointed out that while it appears that Ghent is over Horne, he is still in love with her and she is frustrated by the things that he says to her.

Horne said he has told Ghent’s daughters that if she changes her ways, he would marry her and settle down and that he brought the matter to court because he wants to teach her a lesson to see if she would change.

Horne admitted that he had called Ghent a “sl*t”, but said he went down on his knees and begged her pardon.

The magistrate pointed out to the couple that the details of the case will be in the public domain because there were reporters in the courtroom and they would write about it.

“This may go all over the world,” Burnett said.

‘Your worship, that is ah hard one.’

As he moved to the sentencing phase, the magistrate said he was going to place Ghent on a one-year bond in the sum of EC$1,500 or three months in prison.

Horne then told the court, “Your worship, that is ah hard one. Trust me…. I ain’t go feel comfortable still,” he said.  He then asked the magistrate if he meant that he had banned the woman from him for a year.

The magistrate then explained the meaning of the sentence and Horne said “alright,” adding that he only filed the charge because he wants the woman to change.

Nonetheless, Horne maintained that he knows Ghent, adding that she would say something now and change her mind in two or three weeks.

The magistrate asked Horne if he meant that by next month she might call him.

“Is that I tell yuh,” Horne said. “If yuh tek stock, even Sunday self when we go church.”

He said that what is causing the problem is that Ghent loves the other man and the man does not love her. And since the man came out of prison they (Ghent and Horne) have been having problems.

Horne said Ghent is the only lady who has ever slapped him and he laughed and smiled.

Meanwhile, the prosecutor said there seems to be a big problem between the two, adding that even though provocation would not form part of the case, Horne needs to leave the woman alone.

The magistrate said Horne was not an innocent party in the issue.

After the sentence, the magistrate asked Horne if he would shake Ghent’s hand, and he said he had no problem with that.

However, Ghent said she would not shake his hand because she wants to have nothing to do with him.

She later agreed to shake Horne’s hand, offered a limp hand and gave him a severe cross-eyed look as she did.