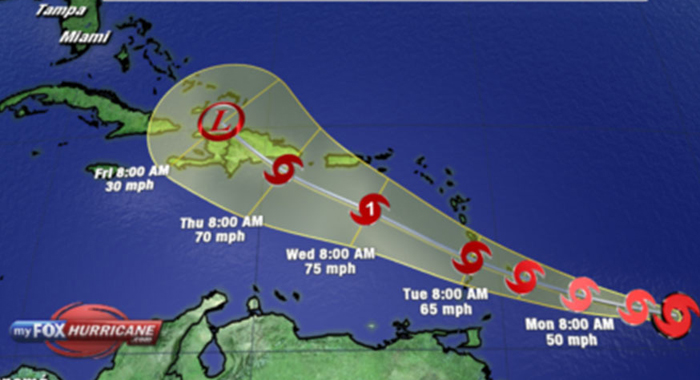 He said forecasters have advised that the cyclone resembles Hurricane Tomas, which, a decade ago, left “millions and millions” in loss and damage in St. Vincent and the Grenadines.

Hurricane Tomas resulted in damage to 1,000 homes, and destroyed 90 per cent of banana and plantain cultivation.

Gonsalves said in a national address:

“I don’t want you to take things lightly and say it’s just a storm and that it is going to the north and it would not impact us.”

“This is the same thing with Tomas. And the Met agencies and NEMO (National Emergency Management Organisation) they have advised me that the way this storm is shaping up in terms of its direction and type, as of this moment, it resembles Tomas. And you know what Tomas did on Oct. 31, 2010. Remember what happened there.”

He said the was accepting the recommendation of NEMO to order that businesses and non-essential services close at 4 p.m. Monday, with gas stations and supermarkets remaining open until 6 p.m.

Emergency shelters will open at 7 p.m.

The prime minister said the storm was packing winds that “can cause a lot, a lot of damage”.

He said that SVG was expected to begin to feel the impact from late Monday in Tuesday.

He urged persons in areas prone to flooding to take all necessary precautions, adding that up to 6 inches of rainfall is forecast during the passage of the storm.

“Six inches is a whole heap ah rain,” he said in the Vincentian vernacular, noting that two inches of rain often results in flooding in Kingstown, the nation’s capital.

He noted that some areas of the country are prone to landslide, adding that the risk is worsened by the fact that the country has been experiencing heavy rainfall over the past few weeks and soils are saturated.

Gonsalves urged fishers to secure their boats, adding the 140-foot-long Captain Hugh Mulzac, the nation’s largest Coast Guard Vessel, had been taken south, close to Grenada, in an effort to avoid the worst of the storm.

Gonsalves said smaller Coast Guard vessels were anchored at the Ottley Hall Marina and Shipyard, west of the capital.

The prime minister urged businesses to activate their disaster plans.

He said the state was relocating some 70 residents of the Lewis Punnet Home — a state-owned facility for the elderly poor — to the Fair Hall Primary School, near the eastern town of Calliaqua.

He said that the National Emergency Council, which he chairs, met Sunday night and the relevant agencies reported on their readiness for the impact of the storm.

All systems are up and ready, the prime minister said.

He said that the north of St. Vincent is likely to be adversely affected if the storm continues on its predicted path.

Maximum sustained winds were near 60 mph (95km/h), with tropical-storm-force winds extending outward up to 45 miles (75 km) from the center.

Dorian was moving towards the west north-west at 14 mph (22 km/h) and on this track, the center of the system was expected to pass near or over St. Vincent early Tuesday morning.

Sustained surface winds between 58 to 70 mph (93 to 113km/h) with higher gusts are expected to spread across SVG early Tuesday morning, persisting into the afternoon.

In addition, pockets of moderate to heavy showers and thunderstorms are expected to move across the islands from early Tuesday morning. Rainfall accumulations of at least 3 to 8 inches (75 to 200 mm) are possible with isolated higher amounts.

As a result, some flash flooding is likely in low-lying areas and near rivers and streams.

Large easterly to southeasterly swells of 2.5 to 3.5 meters (8 to 12 feet) are also forecast to accompany the system. Low-lying coastlines around the islands will be particularly vulnerable at times of high tide.

Large waves and dangerous rip tides can be expected. These will create unsafe conditions for small-craft operators and fishermen.

A high-surf advisory and small-craft warning is now in effect until 6 p.m., Tuesday. Sea-bathers and other users of the sea are advised to stay out of the water.

In this case, a small-craft warning means that mean wind-speeds of 50 to 60 knots (93 to 113km/h) and/or seas equal to or greater than 3 meters (10 feet) will be affecting the marine area.

Residents are advised to make the necessary preparations and keep updated on the progress of this system.