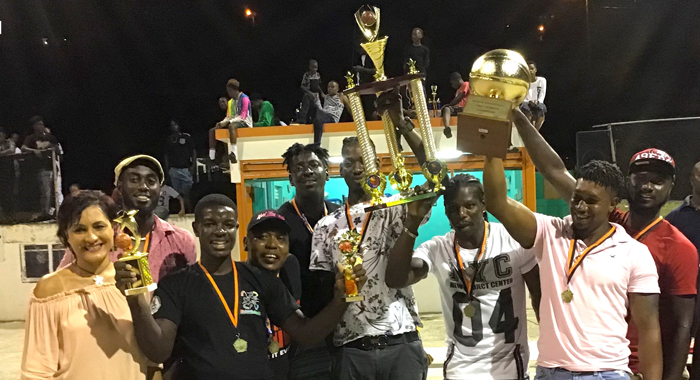 East Blazers have secured their first win in the 21-year-old tournament.

The 21st Vita Malt Bequia Tournament ended on Sunday with veteran team East Blazers finally winning a championship after 21 years. Two unexpected teams emerged victorious in the other divisions with East Sidaz winning the Second Division and Hornets winning the Under 16.

The 2018 defending champions Raptors, led by MVP Kirsten Lampkin and the young and talented Cody Compton, and who placed second in the first round, faced off with the veteran East Blazers in the final best of three series.

Raptors just could not withstand the onslaught of a determined East Blazers team, which the championship had always eluded.

Young Jermaine John, playing in the First Division for the first time was new to the Blazers roster this year, but brought the necessary energy. And, accompanied by veteran point guards Kelan Edwards and Keithroy Lavia, he lad the team victory.

John made it to the First Division, having matriculated from the second division. He also played on the Windward’s national team in Dominica earlier in the summer.

Blazers were undefeated in the first round of competition, winning all eight games and came out blazing in the Final series determined that 2019 would finally be their year.

They won two competitive close games against Raptors and captured the 2019 First Division for the first time in 21 years, despite having been in the final round on numerous occasions.

The Second Division of the younger players had an exciting and surprising conclusion going to a game three in the final series.

Despite winning the first round of competition, Rising Stars competed well with a roster packed with young talent, and were expected to win.

However, they could not hold on to their close lead going into the final seconds of a close game 3 of the 4th quarter.

East Sidaz had defeated defending champs Young Duke in the semi-finals and fought their way to a place in the final series.

They went on to victory in Sunday night’s game 3 with an exciting finish down to the wire, with the game tied with less than a minute to go.

East Sidaz MVP Mario Tannis pulled off the win by 1 point, with a final result of 64 to 63 to a disgusted Coach Tauran Ollivierre of the Rising Stars.

Hornets led the series 1-0 on last Wednesday defeating Knights by 1 point in an exciting game.

But Golden Knights came back to win another close game by 5 points on Friday night, with a 45 to 40 result to tie the series.

Hornets easily defeated the Knights, who folded up in Game 3 with a 51 to 24 point final result.

President of the Basketball Association Sabrina Mitchell expressed gratitude to the officials, executive members, sponsors and the Bequia community at large.

Trophies, plaques and medals were presented to the event winners, for both team and outstanding individual efforts in the 2019 annual event.

Treasurer of the SVGBF, Nigel Crease congratulated the winning teams and to the association for successfully completing another tournament.

Of the numerous individual awards presented, the three Overall Most Valuable players in the three divisions were:

Kirsten Lampkin of the runners-up Raptors in the First Division, Mario Tannis of the victorious East Sidaz in the Second Division and Malachi Isaac of the 4th place Hawks, who had the most impressive statistics despite his team losing in the semi finals.

Lampkin was also awarded the most rebounds trophy with 126 rebounds in 8 games or 15.8 rebounds per game average, as well as the Raptors most valuable player.

Keithroy Lavia of Blazers was awarded the most assists with 27 in 8 games and his teammate young Jermaine John was adjudged the East Blazers most valuable player.

Also of significance in the First Davison was Jovian Derrick’s performance, being adjudged the 2019 Rookie of the Year and securing the most valuable player for the East Sidaz first division squad. Teammate Michael Peniston won the most blocks with 18 in 8 games; and 2018 MVP and Windward’s national player Nicholas Lewis adjudged the East Sidaz MVP.

Rising Stars I finished in last place in the first division standings but Jadley Bynoe was acknowledged for his effort and his teams’ MVP and Rodine Hazell for the most steals with 43 in 7 games.

The visiting Police United team finished third in the First Round standings but were defeated by the Raptors in the semi finals. Kenny Jones of Police Untied was adjudged his teams’ most valuable player.

Second Division awards were as follows:

Mario Tannis not only took the overall Most Valuable Player but also got his teams’ MVP trophy and had the most rebounds with 94 in 6 games or a 15.7 rebounds per game average.

His teammate, Dimitri Peniston took the most assists trophy with 19 in 6 games. Of note was the impressive performance of the young Darren John of Young Duke who got three trophies. He was awarded the most improved player for 2019; had the most steals with 37 in 6 games, and was adjudged the Young Duke MVP.

The runners up Rising Stars’ Augustin Pollard was awarded the Stars MVP and had the most blocks with 15 in 6 games. His teammate Shaquille Primus had the most points with 126 in 6 games.

The children’s teams were also awarded for their efforts.

The 2019 Champions Hornets’ Shamarke Frederick was awarded for his efforts receiving the most points in the youth division with 77 in 6 games, as well as being adjudged his team’s MVP and the Final series MVP.

The overall U16 MVP from Hawks Malachi Isaacs also got the most rebounds with 58 in 4 game s or 14.5 rebounds per game average, and his team’s MVP award. Runners Up Golden Knights’ Kenjay Phillips got recognition for the most assists and most steals with 11 and 25 respectively in 5 games.