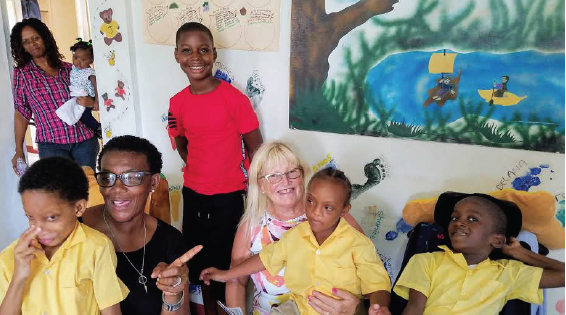 President Sue Williams, accompanied by her husband, arrived in SVG on Wednesday, Aug. 28, on the last leg of her official tour of Soroptimist International Clubs in the Caribbean region.

She had previously travelled to Turks & Caicos, Anguilla, Grenada, Trinidad and Tobago and Barbados.

In SVG, Williams had time with students, teachers and parents of the children that attend the Helping Hands Centre, which is a sponsored Soroptimist of SVG Project. She was impressed with the work of the centre and will look into certain aspects of the Program for possible overseas support for further development, a statement said.

On the following day, Williams visited Government House to make a courtesy call on Governor General Susan Dougan, who was initiated into Soroptimist International of SVG several years ago — and who proudly sported her membership pin, the statement said.

In the hour-long meeting, the governor general was briefed on the current work of the Soroptimist Club including raising funds to rehabilitate The Comfort Station at Heritage Square and to continue the group’s triple education programmes — Helping Hand Centre at New Montrose; The Glebe Pre-School and The Return to School of young mothers.

Williams spoke about her work with clubs in the region and United Kingdom, where she was president of four different Soroptimist Clubs before being elected President of the Federation of Great Britain and Ireland.

She said that clubs are now focused on the Sustainable Development Goals, especially on gender equality, the environment and climate change issues.

Williams then took part in a guided tour of the historic Botanical Gardens by the Curator, Gordon Shallow.

She also met with Permanent Secretary of the Ministry with responsibility for Gender Affairs, Nerissa Gittens–McMillan and two of her departmental heads — La Fleur Quammie, coordinator of gender affairs, and Merissa Finch–Burke, director of social development.

“She was most impressed with the scope of their work in the ministry and among NGOs in the state, and the programme spread; the move to adherence to the various applicable UN Conventions and the monitoring of Saint Vincent and the Grenadines’ progress on fulfilment of the goals,”

“Whilst in the state, she was treated to Vincentian hospitality – a tea party at Sister Zeitha where she met other members of the Club and friends; a lunch with members at the private residence of Sir Cecil Cyrus and Lady Cyrus and a farewell cocktail party at Sister Christine’s residence where she met our leading programme supporters Mr. Junior Bacchus (Helping Hands Centre) and Mr. Keith Joseph of the NOC (Sports for Life),” the statement said.

“She expressed her thanks and appreciation to the Club for the great welcome at Argyle International Airport and President’s Welcome Lunch at Sunset Shores, and to Past President Lavinia Gunn for providing home hospitality for her and her husband.”

While in Barbados, Williams attended the 35th Conference of the Soroptimist International Caribbean Network.

Trinidad and Tobago has the largest number of Clubs in the Caribbean – nine in all.

At the Conference she was brought up to date by the membership on the several projects being undertaken by the various clubs such as Climate Change; Gender Equality, Human Trafficking and Violence against Woman.