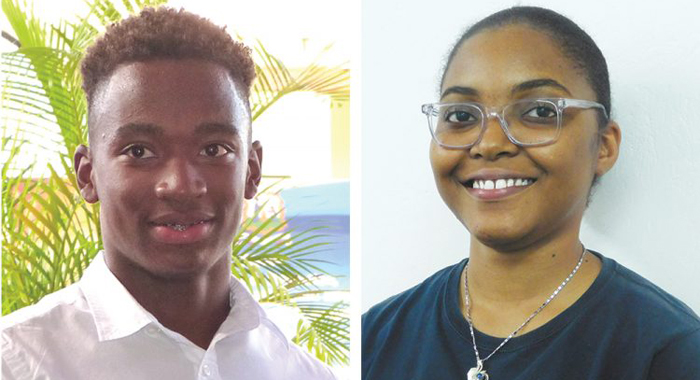 Cabinet on Wednesday approved 48 national scholarships, national exhibitions, a special award, and bursaries to students who sat the CAPE and Associate Degree examinations in 2019.

Ten national scholarships were awarded, in addition to eight national exhibitions, 29 bursaries, and one special award.

“It is to be noted that the criteria for these awards and the recommendations came from the officials of the Ministry of Education and the Director of the St. Vincent and the Grenadines Community College, and accepted by Cabinet,” acting Cabinet Secretary Angie Williams-Jackson said in a press statement.

The 10 national scholars, in order of scholastic performance, for 2019 are:

In 2017, she passed 20 subjects in the Caribbean Secondary Education Certificate (CSEC) examinations — 19 of them at Grade 1 level and the other at Grade 2.

She was the top performer in the Common Entrance Examination in 2012.

Shane Cadogan, in placing second, is awarded $10,000 in addition to his full scholarship.

This is the first time that a cash award has been added to the benefits of the second-placed academic performance, the cabinet secretary said.

Cadogan, 18, a national swimmer is no stranger to the headlines.

It is the third time that he is placing second to Ferguson, having done so in the 2012 Common Entrance Examination, when he was the top male performer and second overall.

And two years ago, his 13 Grade 1 passes at CSEC made him the nation’s top male performer, but second to Fergusson.

Cadogan had obtained a Grade I in maths the previous year.

All national scholars have their tuition and economic cost (as per University of the West Indies benchmarks) paid by the Government of St. Vincent and the Grenadines plus a monthly sum adequate for all living expenses (board and lodging) and associated expenses.

Of the eight, Isaacs and Gonsalves obtained Associate Degrees from the St. Vincent and the Grenadines Community College while the others sat the CAPE examinations.

The national exhibitions have the same benefits as the national scholarships, but for three years instead of five years.

The John Horne Memorial Scholarship is awarded for the first time to the student who best combines academic and cultural excellence, Saeed Bowman, a national exhibition winner.

Ronnie Richardson has been granted a special award with all the benefits of a national exhibition winner.

He topped the students who obtained associate degrees.  He obtained his qualification in teacher education (secondary), but, at age 30, is over the maximum age — 21 — under the rules, for national scholars and national exhibition winners.

“The Government of St. Vincent and the Grenadines congratulates all these scholars on their impressive scholastic performances.  These scholars make us especially proud in the 40th year of our nation’s independence — Renewal at 40!” the statement said.