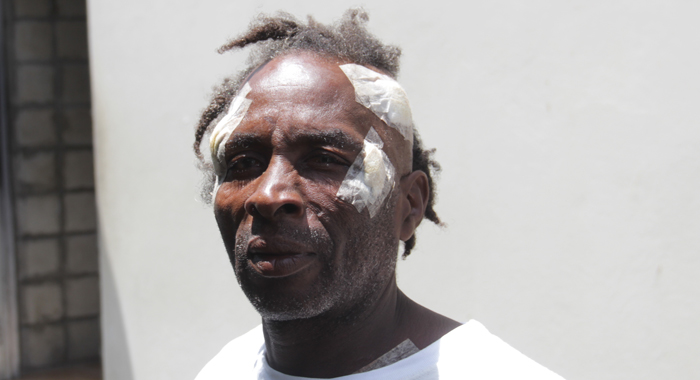 A warning shot from a police officer’s service pistol was not enough to get Keon Lavia to put down a cutlass. (iWN photo)

A Petit Bordel man, last Wednesday, refused to put down a cutlass after police repeatedly ordered him to do so and even after they discharged a firearm as a warning.

In the end, the two police officers had to wrest the cutlass from Keon Lavia, 53, sometime after he had gotten into a fight with a relative, during which he sustained several injuries to the face.

On Thursday, at the Serious Offences Court, in Kingstown, Lavia pleaded guilty to a charge that on Sept. 4 —  last Wednesday — at Petit Bordel, he had in his possession and offensive weapon, to wit a cutlass.

At first, Lavia told the court that he was “guilty with a cause” and proceeded to tell the court that while he had the cutlass in his possession, he was on his way home when the police met him.

However, the Chief Magistrate Rechanne Browne explained the charge to him and told him to take a few moments to decide whether he was guilty.

Lavia then told the court that he was guilty.

The court heard that about 10:30 p.m. last Wednesday, Police Constables 276 Cuffy and 34 Adams, of the Chateaubelair Police Station, went to Petit Bordel in response to a report about Lavia.

When the police arrived at Petit Bordel, Adams saw people running and Lavia approaching the position of the police with a cutlass in his right hand.

Lavia was about 15 feet away from Adams, who shouted, “Police!” and instructed him to drop the cutlass and stand still.

Adams did this several times, but Lavia ignored the officer’s instruction.

The police officer drew his service pistol and discharged one round in the air in an attempt to deter Lavia.

This, however, was of no use and Lavia continued to advance towards the police officers with the cutlass.

The police officers restrained Lavia, brought him to the ground and relieved him of the cutlass.

Lavia was taken into custody and was charged.

In mitigation, Lavia told the court that “after the fight whey I get into”, he went to get the cutlass from his brother to take to the mountains the following day.

He told the court that the police had met him “distance ah miles away” while he was on the road on his way home.

He said he did not know that the two persons were police officers because they were not in uniform.

The chief magistrate noted that Lavia had said he did not know who the persons were even as he said they had said “Police! Police!”

Lavia, however, said it was after they said “Police!” that he dropped the cutlass.

He said the men discharged the round after he dropped the cutlass.

Lavia further told the court that he did not resist arrest and the police “ha’ me kicking me all in me chest” while taking him to the station.

He said he asked the police officer why they had to do that to him while he was under arrest.

In his representation on sentencing, Senior Prosecutor Adolphus Delplesche told the court that offences where people are arming themselves with cutlasses and disturbing the peace are becoming more prevalent.

He said that while it was not presented in the facts, the file contains information that Lavia was brandishing the cutlass and disturbing the community and that was the report to which the police responded.

People were running and scampering as a result, Delplesche said.

The prosecutor said that the court has to apply the law to protect the society, adding that people have to be comfortable and live in peace, without fear that people would come at them with a cutlass, willy-nilly.

He said that while the fact that Lavia has no previous conviction goes in his favour, the offence is a serious one.

The senior prosecutor said he would not recommended a custodial sentence straight away, adding that if the court were so minded he would recommend that it be suspended.

He, however, said that whether or not it is a fine, Lavia must be made to know that the court will not tolerate such offences.

In handing down her sentence, the chief magistrate noted that Lavia had pleaded guilty and had no previous conviction, both to his credit.

She however said that what goes against him is the fact that he was putting other people in fear and had to be forcibly restrained.

“I view these matters very seriously because it is an issue of concern for me that I have observed” Browne said, adding that she intends for persons to understand the seriousness of it.

The chief magistrate placed Lavia on a bond for six months in the sum of EC$950 or six months in prison.
She also ordered him to pay EC$500 to the court by last Friday or go to jail for three months.