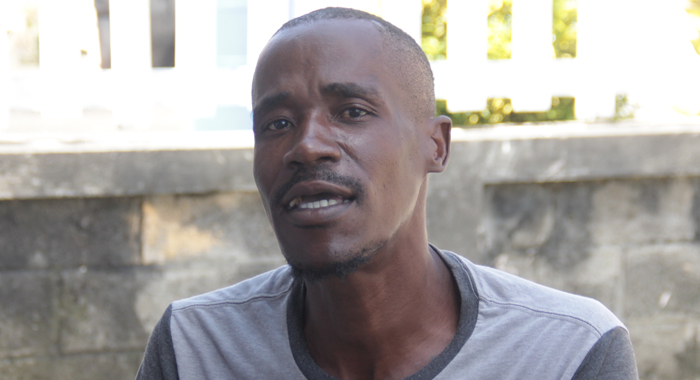 A man who allegedly wounded, twice over the past year, a woman with whom he was reportedly in a relationship was told on Friday to stop badmouthing her.

“Stop it! You’re running her down (maligning her)! She is not here to defend herself!” Chief Magistrate Rechanne Browne told Vincely Dublin of Campden Park at the Serious Offences Court in Kingstown.

“I agree,” the Senior Prosecutor said in response to the magistrate’s admonition.

Dublin pleaded not guilty to a charge that on Aug. 26, 2019, at Campden Park, he unlawfully and maliciously wounded Eden Browne, of Campden Park.

It is the third charge that the man has had before the court in connection with the same complainant.

He is also charged that on June 14, 2018, he assaulted Browne and that on March 10, 2019, he unlawfully and maliciously wounded Browne.

On Aug. 30, the complainant had appeared before Senior Magistrate Rickie Burnett for a scheduled hearing on the matters.

However, Dublin had been absent and another bench warrant was issued for him.

Eden complained to the court that Dublin has wounded her again, resulting in Burnett remarking that while the police were unable to locate Dublin, he was able to find the complainant and allegedly inflict harm on her.

On Friday, Delplesche objected to bail for Dublin, saying that a bench warrant had been issued for him.

The chief magistrate noted that two bench warrants had been issued for the accused for two incidents with the same complainant.

Dublin began explaining his absence from court by saying that he is not telling any lie.

But the chief magistrate said that when people begin with such sentences, it is often because one can expect an onslaught of lies.

Dublin said that last week he was supposed to attend court at the Kingstown Magistrate’s Court but the magistrate had adjourned the case “fuh yi Tuesday”.

He said he was digging a sewerage pit and the complainant came by and told him, that he hadn’t come to court on the Tuesday.

The defendant said he had gone to court on the Monday but Eden told him he did not have to come on the Tuesday.

Delplesche interjected asking him if the complainant is the magistrate, adding that the defendant should stop his nonsense.

The chief magistrate told Dublin that it was very funny because he had no matter listed for Tuesday or Thursday.

Browne said there was no matter on the Tuesday, noting that Tropical Storm Dorian was threatening on that day and the court was closed.

She told him that if he had in fact gone to court it must have been another day.

The chief magistrate further told Dublin that if the complainant did not want to proceed against him she needed to accompany him to court on whatever date it was and say so.

Browne was known to have been in a relationship with Gregory Decaul, of Lowmans Hill,  who had a long history of burglaries and was chopped to death in August, reportedly while stealing from a farmer.

Dublin claimed he was in a relationship with Eden, saying that after Decaul died, he spent two days with Eden.

He said that they recently went to Georgetown together and she was hiding from the police because she didn’t want the officer to see them together.

The chief magistrate then asked Dublin if he had ever considered writing fiction, saying that he has good stories.

At this point, the chief magistrate brought the man’s explanation to an end, telling him that in light of the fact that two bench warrants had to be issued for him, she was remanding him in custody.

She said that the cases were going on too long and asked the prosecutor if they could be disposed of speedily.

As the magistrate was discussing a possible date with the prosecutor, Dublin said that Eden wanted to set him up.

The magistrate, however, told him that she does not want to hear about their story and that they would hear the facts of the case during next Friday, Sept. 13.

Noting the charges against the man, the magistrate said, “Eden must be full ah scars?

“What’s wrong with you?”

But Dublin pointed to a scar in his head, saying it was from a wound inflicted by Eden.

The magistrate asked him if the complainant had given him the peculiar part that was part of his hairstyle.

“So you are a good guy?” the magistrate said.

Dublin said that he had collected EC$1,000 on Saturday and had given EC$900 to Eden.

“You should have given her the 1,000,” the senior prosecutor commented.

Dublin said that is how he treats Eden.

But the chief magistrate told Dublin to stop and that he was not in court to ventilate his personal issues.

She further told Dublin to stop dragging down the woman’s name.

“I don’t like it when people are always quick to jump up [and say] she ha’ x-amount ah man. And yo’ nah say how much girls you have, eh.

“And it will never seem bad. Don’t do that,” the chief magistrate said firmly.

She told Dublin that the matters before the court have nothing to do with the number of boyfriends or girlfriend but with assault and wounding.

“That is all I want to hear about,” she said

One reply on “Man badmouths woman he’s accused of wounding”