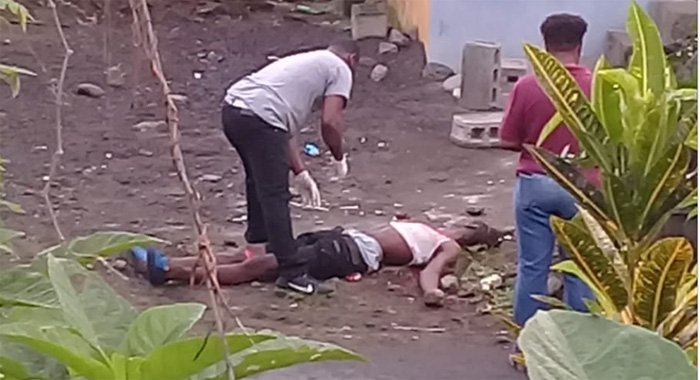 Police at the scene of the killing in Greiggs.

Dead are Zannie Edwards, 24, and Kenroy Roberts, 40, who were killed in separate incidents in Greiggs and Lowmans Leeward.

Sources say that Edwards, a resident of Lauders, and Samriel Thomas, 22, of Greiggs, were hanging out together around 4 a.m. in Greiggs when they were attacked.

Their attacker chopped Edwards to the neck, head, chest and hand, and he died at the scene.

Thomas received a chop wound to the neck, and was taken to a health centre in Marriaqua.

Meanwhile, police in South Leeward responded to a call around 9:30 p.m. Friday of a stabbing incident in Great House, Lowmans Hill.

When they arrived they met Roberts dead, with what appeared to be stab wounds.

iWitness News understands that Roberts was involved in an altercation with two other men, reportedly over a mobile phone.

Meanwhile, On Monday, Cauldric George, 58, who was shot in the face during the robbery at a shop in Prospect last week Friday night, Sept. 20, died at the Milton Cato Memorial Hospital (MCMH), where he was being treated.

Three of the homicides this year have not been classified as murders and officials are expected to order that coroner’s inquests be conducted to determine if they resulted from acts of self defence, as claimed by the perpetrators.