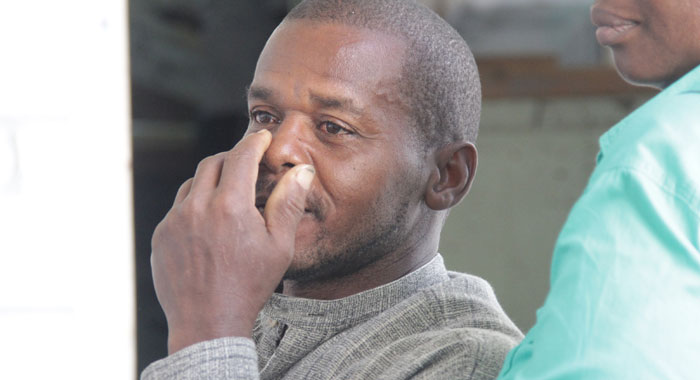 Yohan Buntyn outside the High Court in Kingstown on Friday after the hearing. (iWN Photo)

It was a mercy mission that may have saved one life but claimed another.

It took place on Oct. 22, 2015, when Johan Buntyn, (pronounce yo-han), tired from a hard day’s work in his garden, responded to a request by his fiancée to take an asthma pump to her niece in Calder, who had had an asthma attack.

On the way back, Buntyn, then 50 and a resident of Edinboro, fell asleep at the wheel of the vehicle in the area of Mango Tree Bar in Arnos Vale shortly after sunset.

Buntyn was accompanied by his fiancée during the trip aboard motor vehicle, P6141.

When Buntyn’s fiancée realised that he had fallen asleep at the wheel, she called out to him but got no response.

She again shouted his name and shook him, awaking him from his slumber.

Buntyn tried to regain control of the vehicle, which mounted the kerb and struck Elroy Cruickshank, 52, who had fallen asleep on the sidewalk.

The vehicle dragged Cruickshank from the sidewalk to the road, resulting in serious injuries and hospitalisation at Milton Cato Memorial Hospital, where he died on Nov. 1, 2015.

When he was arraigned this month on a charge of causing death by dangerous driving, Buntyn pleaded guilty and was sentenced on Friday by High Court judge Justice Brian Cottle.

In his submission, defence counsel Ronald “Ronny” Marks said that Cruickshank’s death had resulted from an unfortunate accident.

He admitted that his client was tired when he set out on the trip to Calder, but noted the urgency of the trip.

Marks said that it was the very first time that Buntyn had gotten in an accident since he had been driving.

The lawyer said that after the accident, his client went to the hospital, where he broke down when he saw Cruickshank’s condition.

Buntyn also apologised to Cruickshank, who was unable to respond, Marks said.

Marks said that the accident affected Buntyn to the extent that he had to seek counselling from his church, family, and members of his community.

The lawyer noted that the maximum penalty for causing death by dangerous driving is seven years’ imprisonment and that decided cases say the first consideration should be imprisonment.

Marks, however, argued that the facts and circumstances of the case do not warrant a custodial sentence.

“My lord, this was not a selfish act on the part of Mr. Buntyn. It was not an inconsiderate one, your honour. His only fault that day was that momentarily lapse when tiredness took over…”

He noted that decided cases say that driving while tired is tantamount to driving while under the influence, but argued that it would seem cruel that Buntyn, who has lived an exemplary life, would face prison “for falling asleep”.

Marks said that someone close to him (Marks) had had a similar experience recently; the only difference being that that person crashed into a wall instead of a person.

The lawyer pointed out that Buntyn had pleaded guilty at the first opportunity after receiving legal representation.

Marks further asked that any prison sentence the court might be minded to impose be suspended.

“Mr Buntyn tried to do an act of kindness that day. He was not on a frolic of his own. He was not going to a party,” Marks said.

The judge, in his sentencing remarks, noted that while driving while tired is akin to driving while under the influence of drugs or alcohol, Buntyn’s was not a case of a frolic.

Justice Cottle said that the only aggravating feature was that Buntyn was tired before he started out on his journey, but given the circumstances, he still drove.

The judge also noted the early guilty plea, saying that this, as well as Buntyn’s visit to Cruickshank at the hospital, was an expression of remorse.

He, however, said that the court found Buntyn’s action reprehensible, in that a life was lost.

Justice Cottle sentenced Buntyn to two years in prison, suspended for two years, and ordered him to pay a fine of EC$10,000 in six months or go to prison for one year.

The court also barred Buntyn from holding or obtaining a driving permit for eight years.

However, with Buntyn’s licence having been suspended since the date of the accident, he will still have to wait a further four years before he is allowed to drive again.

Justice Cottle noted that Marks, in his submission, did not speak to any offer of compensation to Cruickshank’s estate.

Justice Cottle said this is a matter that Cruickshank’s family could pursue in the civil court.

The defence and the court commended Renee Simmons, who appeared for the Crown, for her work on the case.

Marks said that the Crown Counsel’s submissions were fair and balanced. Justice Cottle thanked her for her submissions on the legal authorities at such short notice.