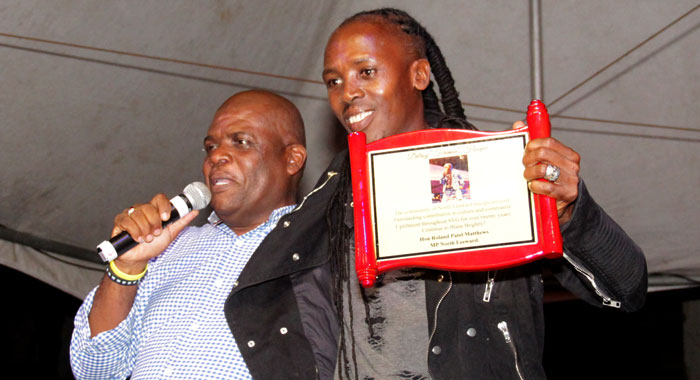 A number of soca artistes from across various generations joined with MP for North leeward Roland “Patel” Matthews in Petit Bordel, on Sunday, to honour soca legend Delroy “Fireman” Hooper, who is celebrating 20 years in the artform.

The event, which was held at the Petit Bordel Playing Field, saw performances from the Rose Hall Drummers, Lola, Rollie Poorsah, Rolie, Dat-C DQ, Madd Zart, Fonando, and, among others, Alla G.

There was a fireworks display as Fireman was announced, and, after receiving the award, the artiste went on to give one of the energetic performances that have endeared him to soca lovers across the country.

A citation read by Rolmina Matthews, daughter of MP Matthews, said, in part:

“Tonight, we bestow upon our very own in the village where he was born, Delroy Fireman Hooper, the honour that he deserves for his hard work, dedication to culture and community upliftment.”

In presenting a plaque to Fireman, MP Matthews said:

“On behalf of the people of the most beautiful constituency in all of SVG, I present this plaque to fireman Hooper.  Let me read what is on it: ‘The Community of North leeward recognises your outstanding contribution to culture and community upliftment throughout SVG for over 20 years. Continue to blaze.’”

In his comments, the MP said it was an honour for him to bestow the honour on Fireman, who he said was born up the road from the event.

“Tonight, a lot of people were getting the wrong idea. As a matter of fact, they said it was political. But, let me tell you, to me, this is personal. I know Delroy ‘Fireman’ Hooper for many, many years. He was born in Petit Bordel and I know him from a very young man growing up.”

Matthews said that since becoming MP for North Leeward he has told himself that Fireman deserves honour of the highest order.

“You heard the citation read tonight. No other artiste has accomplished throughout the length and breadth of St. Vincent, throughout our history, what Fireman has achieved. It is only fair that we, the people of North Leeward, give him his due respect.”

Matthews said that some persons have asked what Fireman has done for Leeward.

“But let me tell you, this artiste has performed in North Leeward, whether it is queen show, on the road, community show, a school show, Fireman performs  for free…

“Now tell me. This is a man of international stature, a man that we don’t seem to recognise the importance of a gentleman we have in Delroy Fireman Hooper.”

Matthews said he was manager/coach of the Northern Boys basketball team, of which Fireman was a member, “that wreaked havoc in St. Vincent when it comes to basketball in the 1990s”.

The MP said he knows about the beginning of Roses Crew, of which Fireman was a founding member.

“North Leeward felt proud to know that we have the Roses Crew and Fireman representing us at Victoria Park. We went out in our thousands to support them at Victoria Park to ensure that on every occasion they perform, they do us proud.

“My fellow villagers, the community of North Leeward, I believe to my heart that honouring this icon tonight was the best for us to do. He celebrated 20 years this year and I couldn’t wait ‘til next year to do it. It had to be done this year. I want to thank you for coming out in your numbers.

“Give yourselves a round of applause for coming out in your numbers and supporting Fireman Hooper tonight. I am sure he couldn’t ask for anything more. Fireman, we are proud of you. You have made us proud and we continue to support you one hundred per cent. You are our hero, you are our icon and we love you to the max,” Matthews said.

In his 20 years in the soca business, Fireman has won the soca monarch title 10 times — more than any other artiste, and has bagged the Ragga Soca title on two occasions.

Speaking during his performance on Sunday, Fireman said:

“Tonight, I have to big up the people who make this thing possible. Honourable Patel Matthews and the people of North Leeward, give yourselves a round of applause. But this greeting also extends to all the other people who make up the people of St. Vincent and the Grenadines and run the daily affairs of St. Vincent and the Grenadines. So we have to live loving, shake each other’s hands. Say, ‘I love you!’”

Fireman also hailed up opposition Leader Godwin Friday, who was in the crowd and also said, “The comrade sends greetings to you all.

“So we just say – I want you to shake each other’s hands and say, ‘I love you.’ Dr. Friday is here and he is extending greetings to you, too. He is all the way from Bequia and he is here. So we have to show that.”

Fireman said he had received a lot of calls from persons who have extended greetings to the people of North Leeward.

“But most of all, I want you to know that this event was possible because of Roland ‘Patel’ Matthews. Give him a round of applause.”

In his comments at the event, Friday said he was standing in the crowd and he heard Fireman call his name so he had to mount “and big him up”.

“So I say tonight is his night, 20 years in the business, so I had to come all the way from Bequia to be here to celebrate with him and I am so happy that so many  people – I expected it but so many people came out here to be part of this.

“What they do as cultural ambassadors, as creators of what we are in St. Vincent and the Grenadines, is wonderful. So I wish him all the best and all the people who are here, leh we continue to wish him another 20 years,” the opposition leader said.