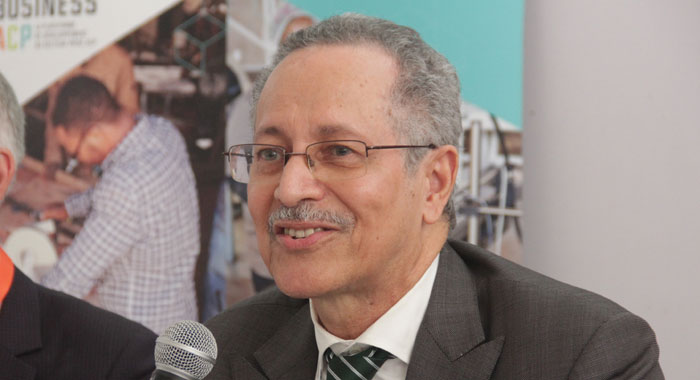 Patrick I. Gomes, secretary-general of the ACP, speaking at Friday’s opening of the ACP Business Summit in Nairobi. (CMC photo)

NAIROBI, Kenya (CMC) — The head of the 79-member Africa, Caribbean and Pacific (ACP) group of states has used the experiences of two Caribbean innovations to emphasise the importance of adding value to products and services and protecting intellectual property.

Guyana-born diplomat Patrick I. Gomes, who is secretary-general of the ACP, told Friday’s opening of the ACP’s first-ever investment village, that he was happy to return to Kenya after many years and see Barbados’ solar hot water company, Solar Dynamics, in the market.

Solar Dynamics, which was established in 1974, one year before the ACP, describes itself as “the Caribbean’s most-efficient solar hot water system”.

Gomes said: “When I lived and worked in Barbados — I won’t say how many years ago — the shower and the water in my sink was using, in fact, Solar Dynamics. We are very proud of you.”

He said all of the Caribbean and the ACP must be proud of that level of foresight and ingenuity.

“And I like very much the fact that there is such leadership and talent here that would penetrate the markets. That you are already selling in China is important. That’s where our products must go.”

He said the ACP wants micro, small, and medium enterprises to scale up.

“It’s not only to multiply what we have already. But it is to multiply so that, in fact, what is the knowledge component adds it.”

Gomes then went on to talk about the “very disappointing” story of how Japan continues to benefit from a species of tomato that was developed in the Caribbean.

“We worked in the faculty of agriculture and developed a special variety of tomatoes and that is called the calypso variety.

“The calypso variety now has become so famous, the seeds, though, are produced by Japan. So, the simple farmer in Trinidad and Tobago who wants to plant the tomatoes, the calypso variety, cannot do that without paying to the Japanese.”

“And that is why I am very happy to know that also in our trade community and our programme, we must be looking all the time to be innovative.”

Gomes said nothing breeds success like success, adding that the enterprises on show have been succeeding and doing a lot already.

“Let us continue to build together so that we are able to have micro, small and medium enterprise occupy the level where … Godiva is and also make sure that the investment that comes to us is truly transformative.”

He said what he had seen on display was awesome.

“I have only seen the tip of the iceberg. The remarkable products, the remarkable ways in which you have taken your skill and also the resources of our countries and transform them to bring great value is exceptional and is worthy of your coagulations.”

“I have tasted it, it is remarkable what you have achieved already. And it is only the stepping stones in a range of products.”

He said that is why the ACP wants to say that every investment that comes from the European Investment Bank must be looked at “in terms of the way in which it is going to transform what we have, not just keep us static and produce more of the same.

“And that is remarkable because we have had a question about the investment facility and went to see that it has not been able to reach to the level at which micro, small and medium enterprises have been focused and we need to do that. So we have to work at both levels.”

Gomes said that while he referred to the know-how and those who are in the market, “we have to challenge those that are at the top of the market also.

“So while you will build from below and the micro, small and medium enterprises will, in fact, accomplish a lot, we are not in the game just to remain at the bottom…”

Gomes recounted that with the formation of the ACP and the early negotiations with European Union, Muslim nations, despite their religious objection to alcohol, demanded that sugar and its by-products must be included in the negotiations.

“They crossed the barrier and that’s what we have to cross — the differences to build on the beauty we have that all of us will complement the skill, ingenuity to accomplish something greater than we have so far.”

Gomes said that the investment village is also a landmark that must be built on.

“Those who come along with you and come after you must see your achievements and even carry them to greater heights. That is what we are about.”

The business summit runs Dec. 6 to 10 and is taking place within in the framework of the 9th Summit of ACP Heads of State and Government.

The 9th ACP Summit of Heads of State and Government takes place here December 9 to 10 under the theme “A Transformed ACP: Committed to Multilateralism” and will be preceded by ministerial sessions from Dec. 6 to 8.

Speaking to the Caribbean Media Corporation (CMC) on the sidelines of the business summit James Husbands, managing director of Solar Dynamics, said that managing “intellectual property has serious connotations for development”.

Husbands said that once a company is developing a product the challenge is really being able to defend the intellectual property.

“That’s one of the challenges, I think, we have had traditionally. That whereas you can do the implementation of the statutes you want, the problem is when there is infringement, then you are unable, financially to defend that.”

Husbands told CMC said that has been a conundrum.

“And the interesting episode of tomato, if we did have intellectual property and we did have somebody who was pirating the information and they registered it, the challenge would be are we in a position to defend it,” Husbands said.

He told CMC that notwithstanding this challenge, it is important to register and defend intellectual property.

“Perhaps this is one of the things we need to look at. How best that can be done in developing countries and whether there is a system of governance, whether it can be facilitated through an arm like Caribbean Export or one of the other institutions where there is a centralised system of defence of intellectual property because small companies can’t do it themselves and that is the difficulty, that’s the challenge.  They don’t have the financial muscle to be able to fend off raiders,” Husbands said.