Woman screams outside court as brother’s killer is sentenced 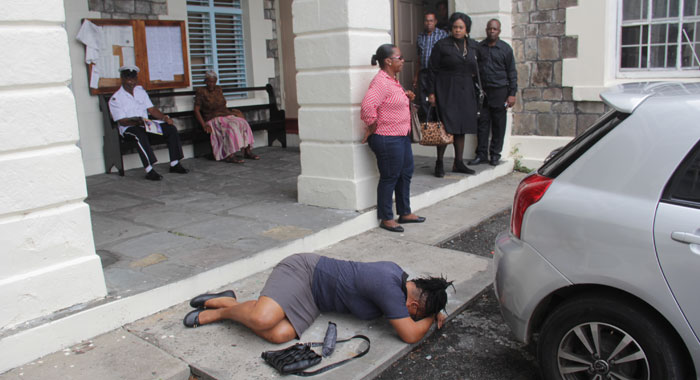 Persons look on the woman lying on the ground outside the High Court on Thursday. (iWN photo)

A woman, said to be the sister of a man who died after being stabbed in the neck in November 2015, ran out of the High Court, on Thursday, fell to the ground and screamed after his killer was sentenced to eight years in prison.

However, Benjamin Jackson, 53, will only have to spend a further three years, 10 months and 21 days in prison, having been on remand for four years, one month and nine days.

The sentencing was in the case in which Christopher Allan Rouse, 29,  of Glen, had walked to the mobile police station in his village, on Nov. 1, 2015, and told police there that a man had stabbed him in neck.

Rouse then collapsed and died outside the police outpost.

In April this year, Jackson’s lawyer, Jomo Thomas, wrote to the Office of the Director of Public Prosecution saying the accused man was willing to plead guilty to manslaughter.

The Crown, however, rejected the offer and the matter went to trial.

However, just before closing submissions, the Crown accepted the guilty plea for manslaughter.

At the sentencing hearing, Thomas said that in the early morning of Nov. 1, 2015, Jackson was at his home, which includes a shop, and an altercation developed between him and Rouse.

This resulted in Jackson stabbing Rouse with a pair of scissors in the neck.

“Sadly, unfortunately, a man is dead, but the evidence seems to indicate that for the prisoner at the bar, trouble came up to his doorstep.”

The lawyer said that trouble came between 3 and 4 a.m. when Rouse accosted Jackson and tried to choke him.

Thomas said his client reached for a pair of scissors and stabbed Rouse.

There was a history of harassment between both men but there was no premeditation at all, the lawyer told the court, adding that Jackson had previously been of good character.

The lawyer noted that the acceptance of the guilty plea came when all the evidence was in.

He, however, said that on April 30, the defence wrote to the DPP offering to plead guilty for manslaughter, but the Crown rejected the offer.

The lawyer argued that it was not his client’s fault that the plea had come at that point and he argued that Jackson should be given the full one-third discount for an early guilty plea.

In his sentencing comments, High Court judge Justice Brian Cottle said Jackson has no previous conviction and is not likely to reoffend.

The judge further pointed out that the incident occurred at Jackson’s home in the early hours of the morning,

He said the established starting point for most cases of manslaughter is 15 years of imprisonment and that the court saw no reason to depart from that in the extant case.

The use of a weapon to inflict a fatal injury was aggravating, but mitigating was the fact that only a single blow was inflicted, the court said.

The judge further noted, in mitigation, that the weapon was a pair of scissors that Jackson had at hand in the shop and that there was no premeditation.

The court also found that there was significant provocation and a history of Rouse harassing Jackson.

The court also offered the one-third discount for the guilty plea, noting that Jackson had made the offer in writing — before trial — to plead guilty to manslaughter.

This brought the sentence to eight years.

From this, the court deducted the four years, one month and nine days that Jackson had spent on remand.