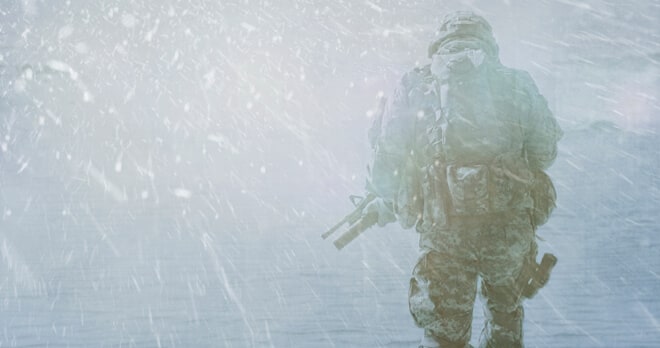 NFCI is an injury of the hands or feet resulting from exposure to wet conditions and temperatures just above freezing, typically found in soldiers.

A Vincentian soldier is suing the British government for 300,000 pounds sterling, claiming he was injured as a result of being exposed to cold conditions.

Zakri Joseph, 35, says that the Ministry of Defence failed to warn him of his increased vulnerability, because of his ethnicity, or give him extra training, instruction or information, the Salisbury Journal has reported.

Joseph is expecting to be medically discharged from the Army soon after developing a condition called non-freezing cold injury (NFCI) through his service, the newspaper cited the lawsuit as saying.

NFCI is an injury of the hands or feet resulting from exposure to wet conditions and temperatures just above freezing, typically found in soldiers.

At first, the tissue is cold and anaesthetic (insensitive to pain), progressing to hyperemia (an excess of blood in the vessels supplying an organ or other parts of the body) in 24-48 hours. Hyperemia is accompanied by an intensely painful burning sensation as well as blisters, redness, and possibly, ulcerations.

Individuals of black and Caribbean heritage are more likely to contract the condition, which can affect them for the rest of their lives.

Joseph first developed numb feet during basic training at Catterick, but largely recovered from this and continued to serve on several winter tours, the newspaper said.

However, in November 2016, he joined Exercise Black Hackle in Scotland, with temperatures plunging to minus 6 degrees Celsius, on a fortnight’s exercise.

The exercise involved nights in the field, sleeping under a poncho, and staying in an essentially unheated open hangar.

Joseph alleges that he was unable to keep his feet dry, and after a couple of days, developed symptoms in his hands and feet. However, he says his platoon sergeant told him to man up.

And when he complained of his symptoms to a sergeant, he says he was told to stick it out, as the company were facing a review, and it would reflect badly on the company if anyone was sent back to camp.

His condition is said to have worsened when he was sent on a course, sleeping in a six-bed dormitory that was very cold, and using cold showers. And although he visited a nearby gym to take his hot showers, at his own expense that didn’t help.

Joseph said he was given the same equipment as others who were not so vulnerable and accuses the Ministry of Defence of negligence, in failing to train or instruct his commanders highlighting his vulnerability to NFCI.

He also accused them of failing to provide him with specialist clothing and insulated boots, failing to take him off the exercise when he complained of cold injuries, failing to obtain immediate medical treatment, and returning him to working and exercising in cold conditions.

Joseph said he was also negligently given unsuitable personal protective equipment, and not enough hot food and drinks regularly, which would have reduced the risk of developing the condition.

The lawsuit said the Ministry of Defence negligently fostered an environment in which NCOs and officers were reluctant to cut short or abort exercises, and discouraged recruits from dropping out of exercises.

Joseph claims that he had to take painkillers regularly to manage his symptoms, and is disadvantaged on the open labour market.