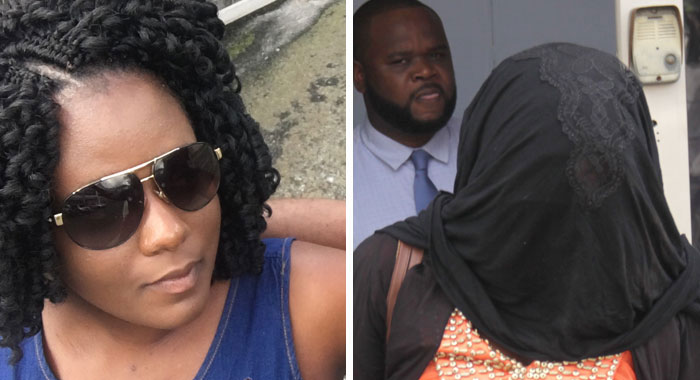 Akitta Haywood hides her face as she leaves the Kingstown Magistrate’s Court on Monday. Her boyfriend, Leif Joslyn, is in the background. Haywood is seen at left, in a November 2018 photo.

A woman, who staged a burglary at her boyfriend’s home, stole his almost-EC$15,000 shoe collection then made a false report to police was, on Monday, fined EC$1,000.

The fine was paid by the man whose house she had damaged and whose shoe collection she had stolen — with whom she is still in a relationship.

Akitta Haywood, 28, a self-employed resident of Murray’s Village had pleaded guilty, on Nov. 22, 2018, to a charge that on the previous day, she made a false report to police.

She faced up to three years in prison for her crime.

She pleaded not guilty to that charge.

When the matter came up on Monday, at the Kingstown Magistrate’s Court, the Crown withdrew the theft charge, with prosecutor Police Constable Corlene Samuel indicating that Joslyn was no longer interested in pursuing the matter.

However, Haywood still had to face the consequences of having made a false report to the police.

According to the facts read by Samuel, Constable 733 Holder was on duty at the Criminal Investigation Department in Kingstown on Nov. 21, 2018, when, about 11:45 a.m., Haywood filed a report of a burglary at Joslyn’s home.

Haywood told the detective that she had collected a key to Joslyn’s home from his brother, and when she got to the house, she met a window in Joslyn’s bedroom broken and his collection of expensive shoes missing.

Holder visited the house, where Haywood pointed out the broken window and took him to Joslyn’s bedroom, indicating where the shoes used to be.

Other parts of the house were also ransacked.

The detective noticed that there was no broken glass inside the bedroom and that a stone was outside the house, but said nothing about this to Haywood.

Haywood then gave the police a formal statement, indicating how she had met the house.

When she had completed the statement, the detective told her of his observation about all of the broken glass falling outside of the house and that there was a stone outside the window.

Haywood then admitted that she had used a stone to break the glass and has placed the shoe collection in a garbage bin for someone to collect.

The woman told the officer that she had gotten upset because her boyfriend’s friend had told her that he was cheating on her.

The woman further told the detective that she believed the information relayed by her boyfriend’s friend and she, therefore, planned, along with someone else, to get back at him.

Haywood was then charged with making a false report.

In mitigation, Haywood, who was unrepresented, told the court that she was frustrated after learning of her boyfriend’s philandering ways.

“The thing just keep running through my head,” she told the court.

Senior Magistrate Rickie Burnett noted that it was not every day that a case like this comes before the court.

“This is new. Parliament prescribed three years for this — in jail,” he told Haywood, who began to sob.

The prosecutor commented that it was “funny” that when persons report crimes and the police don’t respond immediately, the police are criticised.

Samuel, however, noted that this was a case where the police had responded promptly, only for it to be revealed that Haywood had planned a crime and reported it to the police.

The prosecutor said that if the detective who investigated the matter had not been vigilant, someone else could have been charged for the fake burglary.

The senior magistrate, citing information revealed by Haywood, noted that her relationship with Joslyn was not her first.

Haywood is mother of two children, ages 10 and 9.

“You admitted to having two children for two different men in a short space of time,” Burnett said.

The prosecutor asked that the sentence reflect the seriousness of the crime and as a warning to others.

As the hearing moved closer to the sentencing phase, the senior magistrate said:

“Madam, I want to teach you a lesson – a hard one too. Because in my mind, you have a criminal mind. Not all men are faithful. I am not saying it is right. You had two children with two men before.”

Burnett noted that it was Haywood’s first conviction and that she had pleaded guilty in November 2018. He said she had had more than a year with the matter hanging over her head and must have been agonising since then.

The senior magistrate, however, said that in saying this, he was only talking out loud to rationalise his sentence.

He said that Haywood could not pay a fine, but had shown remorse. He also questioned, rhetorically, what would happen to her children if she was sent to prison.

“I have to do something to let her know what she did wasn’t right. I don’t want her to leave here laughing at us. Sometimes, they do that. They go outside and laugh at us.”
He then ordered Haywood to sit on the prisoner’s bench until the end of the sitting.

A sobbing Haywood went to the bathroom about four times in the hour or so that she waited to be sentenced.

In the end, Burnett fined Haywood EC$1,000, which Joslyn, who had arrived at court before the sentence was handed down, paid immediately.