Death of patient at MCMH to be investigated 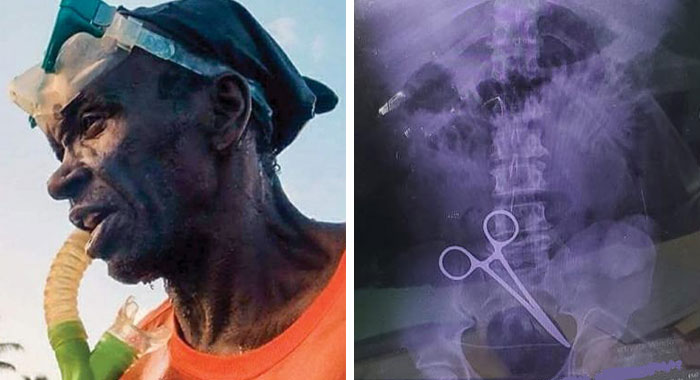 Arnott Hope, left died at the Milton Cato Memorial Hospital after a surgical tool was reportedly stitched up in his abdomen, purportedly shown at right.

The Ralph Gonsalves government has hired a Trinidadian professor of surgery to review the treatment of a man who died at the Milton Cato Memorial Hospital (MCMH) in late December, reportedly after a medical team stitched up a surgical tool in his abdomen.

Arnott Hope, a 58-year-old fisherman, of Pole Yard, Arnos Vale, was initially taken to the MCMH on Dec. 27 after being shot in the groin area in his community.

He underwent surgery and was reportedly in a stable condition, even after the surgical team is said to have found that one of the tools used in the surgery was unaccounted for.

The following day, Dec. 28, an x-ray of Hope is said to have confirmed that the missing surgical tool was, in fact, stitched up inside him.

Hope underwent a second surgical intervention and died at the hospital on Dec. 29.

His cause of death has been listed as hypovolemia — a state of decreased intravascular volume, which may be due to either a loss of both salt and water or a decrease in blood volume.

Hope’s family has threatened legal action and has retained lawyer Israel Bruce to look into the matter.

iWitness News has seen a copy of an x-ray film from the MCMH bearing Hope’s name that suggests that a surgical tool was, in fact, stitched up in his body.

Speaking at a press conference in Kingstown on Tuesday, Gonsalves said there were some questions raised about the treatment that Hope received at MCMH.

“There is no suggestion that there was any negligence but because of certain circumstances, I had spoken to the chief medical officer (Simone Keizer-Beache) and ask that she discuss the matter properly among the professionals and the ministry and the services of a professor of surgery from the region has been engaged. There are terms of reference as to this patient; from the time he entered, he was treated,” the prime minister said.

Gonsalves noted that his government launched, in October 2019, a Charter of Patients’ Rights and Responsibilities.

“… well, if this is the first case in which we are going to have a review, so be it.

“But this is the second decade of the 21st Century,” he said, adding that his government has spent a lot of money on health and has decentralised the delivery of health.

“We spend 80-something million dollars a year on health and the decentralisation means there is less pressure on the Milton Cato Memorial Hospital than there was before,” Gonsalves said, adding that the Modern Medical and Diagnostic Centre and the polyclinics are taking pressure off MCMH.

“Nobody, incidentally, has come to me about this patient you know. Nobody. No wife, no son, no daughter, no family. It’s just that certain matters were reported to me and I asked in light of those reports, what are we doing.

“I don’t want this to be a secret,” he said, adding that where the questions are they may be properly answered and everybody involved may well be vindicated.

“We are not looking for any wrongdoing; we just want to know if anything went wrong.”

“… This is a humble person. Thank God is not Ralph Gonsalves’ child or family or they woulda say Ralph is only doing it or urging because it hit home.  I don’t know the person from Adam and I am not the one who decided that this must be done.  I asked the question and said give me an answer. This is the answer and we just wait and see that this independent review take place and everybody, nurses, doctors, everybody, every health professional who is treating patients must know that the patient has rights. This is no longer the age when you say that medicine is something you practice only in private.

“As you notice, I am careful in circumscribing my remarks so that I don’t say anything.”

The prime minister said there are a lot of very good professionals in the hospital.

“I just want to make sure that we all work to the highest possible standards in all the circumstances.

Asked how he came to the conclusion of no suggestion of negligence, Gonsalves said:

“Because there is no suggestion of negligence by those in the health system who spoke to me.”

He, however, said the questions about the treatment Hope received “can only come through an independent review, because from the reports that I saw, when I posed the question, it was not clear to me, reading it, because I am not a medical doctor, and the view was expressed to me, ok they would get an independent person to do a review.

“So I can’t make a suggestion that at any stage there was negligence and that suggestion is not being made.”

Gonsalves said he expects that the review would be conducted expeditiously.

“I am hopeful that before the end of February we should be able to get this review done. Whether or not this review will be published, I can’t tell you because I don’t want to pre-judge any issue.”

“Every patient, however humble he or she appears, at a clinic, at a hospital, that patient must be accorded the optimal health care available in all the circumstances. If you don’t have a particular piece of equipment that you need, that’s a different story. You notice I am very precise and careful in my choice of words.”

4 replies on “Death of patient at MCMH to be investigated”