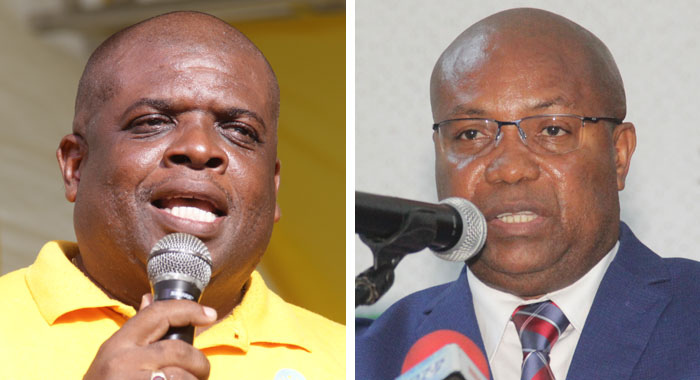 Member of Parliament for North Leeward Roland “Patel” Matthews has accused Commissioner of Police Colin John of lying about the police raid on a marijuana farm in Richmond Vale last week Tuesday.

Matthews said Cecil Hamilton Edwards, 69, was reportedly given the go-ahead to plant marijuana while awaiting the processing of his licence.

Marijuana cultivation, possession, and transportation remain illegal in St. Vincent, although the government, in December 2018, passed some reform laws which are yet to come into effect.

The government has said that notwithstanding the law, its policy is to relax enforcement of some elements of the law, pending the proclamation of the new law.

Regarding the raid, John said last week that police officers were driving around and saw Edwards’ field and decided to cut it down.

However, at a New Democratic Party (NDP) rally in Chateaubelair on Monday, Matthews channelled John’s version of events.

“When you are coming down that road, you cannot see what is being planted. It is above the road and plus, it is barricaded with galvanise sheeting,” he said.

“So … Colin John was lying and saying the police were driving around and they saw the cultivation and they went and cut it down and he told them they must desist from doing so because of the amnesty and all that.

“Now, I have some news for Colin John because I know, as a Member of Parliament, we voted in December of 2018 to pass a marijuana amnesty bill. Up to today, the bill is not yet operationalised. So when Colin John is telling people that we know what the government policy is with regards to amnesty and all that, what is Colin John talking about?

“Commissioner John, you need to explain to the people what you are talking about because it seems that there is some arrangement that only you alone know because the rank and file of the police force has no information that there is some kind of special treatment to be given to ganja farmers.”

Matthews said he argued in Parliament saying that lawmakers have to make it right and not say to rely on police discretion.

“The question is: who ordered them and unless we have some satisfactory explanation as to why Hamilton Edwards’ farm was raided, I am going to stand firm in my belief that it was politically motivated and nobody could change me.

“I say I will continue to voice my opinion until the government, the Cannabis Authority or whoever they be compensate [Edwards] for his ganja field,” Matthews said, adding that the farmer invested over EC$8,000 after he was encouraged to get into marijuana cultivation.