Bequia airport to be repaired this year

Amidst general dilapidation, a section of the airport’s roof collapsed this month 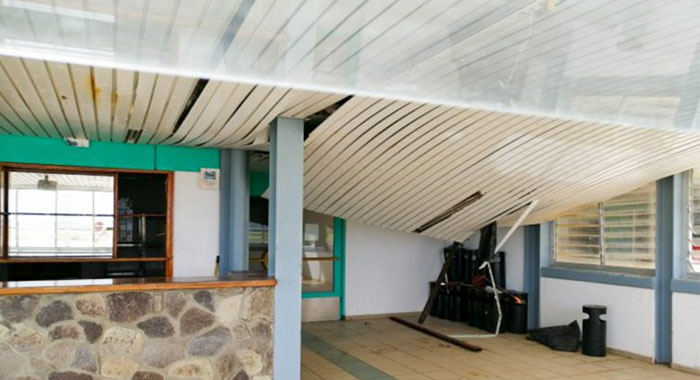 The dilapidated JF Mitchell Airport on Bequia will be repaired this year, Prime Minister Ralph Gonsalves said in Parliament on Wednesday, in response to a question from Leader of the Opposition Godwin Friday.

Friday, who is parliamentary representative for the North Grenadines, where Bequia is allocated, said that the airport continues to deteriorate, with the ceiling in the restaurant area having recently fallen down.

He asked Gonsalves, who is Minister of National Security, Legal Affairs, Grenadines Affairs and Energy, to say whether there is an urgent need to repair that airport and when the necessary repairs will be done.

In response, Gonsalves said Friday was quite correct that there has been deterioration of the airport.

He said that on Jan. 11 and 12, the Meteorological Office at Argyle recorded very high sustained winds in excess of 22 miles per hour, with higher gusts in some area.

“And, unfortunately, the higher gust created some difficulties on the building itself, at the area where the roof collapsed, I have been advised,” the prime minister said.

He said that the airport is “a good project” but suffers from environmental degradation.

“It really is a lot of maintenance on and on-going basis and sometimes getting the maintenance done is frustrating for a number of reasons, including getting the fittings in relation to those that were there.”

Gonsalves said there is EC$1.27 million in the estimates this year for the rehabilitation of airports, primarily the JF Mitchell Airport.

He said that something has to be done at Canouan also but there is a special project there in relation to the CDB with the runway, which is also in the estimates and something at the Union Island airport.

“We are going to rehabilitate the terminal building and facilities, the roof, the ceiling, control tower, plumbing, water supply systems and fixtures, rewiring of the building, and the replacement of damaged electrical fittings, rewiring of apron floodlights and replacement of fixtures, purchase and installation of back-up generator, purchase of office furniture. Some repairs have to be done to the aircraft parking apron. There are one or two broken areas on the runway and we had done work on the fencing but we still have to go and do work again on the fencing,” Gonsalves said.

He said that in 2019, the government had done “some cosmetic work” on some areas of the building and also at the airport fencing.

The prime minister said he suspects that because the project was prepared before the events of Jan. 11 and 12, a little more money would be required.

“But we will find it from another source if that is required, but, substantively, we have the resources and it’s in the development account. It’s a grant from the Republic of China,” the prime minister said.

2 replies on “Bequia airport to be repaired this year”