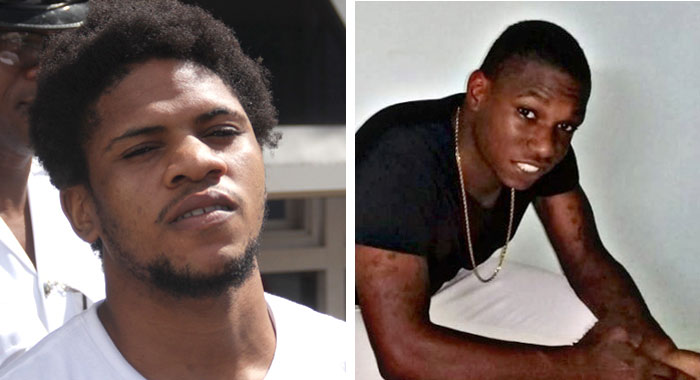 Two cousins who are awaiting trial on separate robbery charges have been jailed for stealing a number of items from a tourist.

The men, who represented themselves at their trial, were convicted one day earlier after an expedited trial on Jan. 30, the day that the complainant left St. Vincent and one day after the crime. The men faced a maximum of two years’ imprisonment.

After the guilty verdict, Phillips retained counsel Grant Connell to mitigate on his behalf.

Filipidis, a medical doctor, told the court that she came to St. Vincent and the Grenadines as a tourist.

She went to Canash Beach along with her mother, who does not speak English.

Filipidis had a backpack with the items mentioned and placed it on the beach and covered it with a towel.

She said she was looking at the sea and “chilling” when she heard her mother scream.

When she looked around, Filipidis saw a man with his face and head covered with cloth.

The man had a gun and made off with the backpack containing the items for which he was later charged.

Filipidis said she ran and raised the alarm.

Both businessmen had met Phillips and Cato shortly after the theft.

Cato and Phillips deflected suspicion from themselves by telling the businessmen, separately, that they had seen two men run from the beach.

Also testifying in the matter were detectives Corporal Colin May, Constable Hadley Ballantyne, and Constable 139 Richards of the Criminal Investigation Department at the Calliaqua Police Station.

The officers told the court that they were among a party that responded to a report of a robbery at the beach.

On arrival at the scene, they received further information and they proceeded in the direction of Prospect.
While travelling along the gap at Gitts Supermarket in Prospect, they saw Phillips and Cato walking towards the police vehicle.

As the police vehicle got closer, Phillips ran and Cato continued walking.

The police officers arrested Cato, who was carrying a backpack containing a number of items, and continued their pursuit of Phillips, who they later nabbed in a minivan.

The officers also took the complainant to the police station.

There they conducted a search of the backpack and found it to contain a fishing line, a pair of pants, a shirt, and some other items, along with an iPhone, contact lenses,  EC$40,  2,600 Cambodian riel and 100 Turkish lira in cash, and a quantity of marijuana.

At the police station, Cato said that the complainant,

Filipidis was brought to the station and was able to unlock the iPhone using its facial recognition feature. She also identified several of the other items as her property.

She said that the long-sleeved red shirt was the same one that the person was wearing when they stole her bag.

In their defence, Phillips and Cato told the court that they had gone fishing at the beach and were leaving when one “Hombre”, who had earlier checked Cato to purchase marijuana, gave the backpack to Cato.

Phillips said that he only knew “Hombre” by that name.

However, at the police station, after their arrest, Cato had told the police that Hombre’s legal name was Vincent John.

However, when the police brought John to the station that same night, Cato initially said that Vincent John was not Hombre. He later changed his mind and said they were one and the same person.

Questioned about this in court, Cato said he had initially said John was not “Hombre” because he was shocked and surprised at the speed with which police had located and brought John to the station.

Cato said he did not want to come across as an informer.

However, at the station, Phillips immediately told the police that John was “Hombre”.

After hearing the name “Hombre” being mentioned repeatedly in court, the prosecutor Police Constable Corlene Samuel sent officers to bring John to court so that by the time the magistrate Burnett said he would like to hear from him, the man was already outside the courtroom.

John told the court that while he knows Cato, when he (John) went to the police station the previous night, it was the first time he was seeing him in years.

John told the court that his friends call him “Vince” and that on the day of the crime he and friends were at a friend’s house all day cooking and watching movies until the police came for him.

He told the court that when the police came and asked who is Vincent John, he raised his hand and said, “I am Vincent John” and the officers took him to the station, where he was told of the investigation.

Triston De Shong, one of his friends, corroborated John’s account.

Phillips is awaiting trial on a number of robbery charges, included the gunpoint robbery of a loaded gun that was in the possession of a licenced firearm holder.

Phillips recently told the High Court that one of the complainants in one of the robbery charges had met him and said that he would not offer any evidence against him.

In March 2018, Phillips, then 21, along with Anthony Hope, 16, of Belair, were given four-year jail terms, suspended for 18 months, for their burglary of a Kingstown business place that left the senior magistrate baffled.

The court handed down the sentences after hearing submissions from counsel Connell and pastor Cecil Richards.

2 replies on “Accused robbers jailed for stealing from tourist”