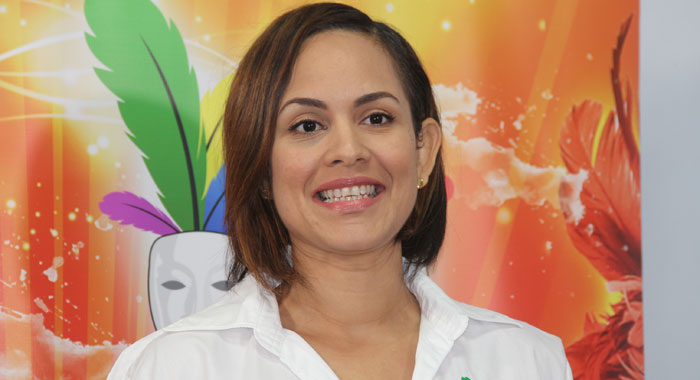 Head of the CDC’s Beauty Shows Committee, LaFerne Fraser, announced the new date for the show on Tuesday. (iWN photo)

The Miss SVG Pageant will not form part of Vincy Mas 2020 activities.

“… Miss SVG is moving from its home in early June. We are trying something that we think can bring much-needed energy to this pageant and the timing, we think, is extraordinary with the Renewal @ 40 endeavour, which culminates in October this year for our independence celebrations. Without further ado, the staging of Miss SVG 2020 will be on October 31st,” LaFerne Fraser, head of the Carnival Development Corporation’s (CDC) Beauty Shows Committee, said at a press conference on Tuesday.

Fraser said that the Miss SVG pageant remains largely a local audience and has not been for a long time official referred to as “carnival queen”.

“The independence [period] also gives a more of a national queen flare and that’s what we are really working towards. If we play our cards right, we will leverage people coming into the country during that period, as you are all aware, the independence period is now growing. It has grown immensely and it is continuing to grow even further.”

She said that time of year has become a period of pageants and St. Vincent and the Grenadines has a long, proud culture of beauty shows since 1951 and her committed wished to keep it that way.

Fraser said people might be wondering why and how her committee come up with the change.

She noted that her committee has been operating for three years and “since year one, we have been trying to find ways to see Miss SVG develop and grow as we should.

“And while we have made changes, we are proud of the changes that we were able to accomplish, we think that there is more that can be done. Our society has seen many changes over the past two decades and the question is, ‘Has Miss SVG evolved enough to withstand those changes?’ and by our estimates, there is more to be done through this product, which we have been charged with developing, protecting and maintaining.”

Fraser said that pageants the world over is benefitting from some change.

“In addition to that — the production aspect, we are looking at strengthening the experience and impact of our titleholders. Let’s face it, 20-plus years ago, Miss SVG, by virtue of being crowned and maintaining a regal disposition paired with service and grace, was one of the most influential people in our country and the queen remained queen for years and years in the hearts of admiring Vincentians.

“Fast forward to today, for more reasons than one, that level of impact that we saw decades ago is difficult it to reach with the status quo.”

Fraser said that among the changes that her committee is working on for 2021 is  “securing prestigious and rare opportunities which are far more likely for the title holders than a young woman who is not holding the title of Miss SVG is paramount”.

She said that these opportunities would be separate from the current one, such as the university scholarship and representing SVG at other pageants.

“We are seizing the moment to chart a new path at the culmination of our country’s renewal @40 in the interest of Miss SVG and we really look forward to the support and the encouragement o the public,’ Fraser said.