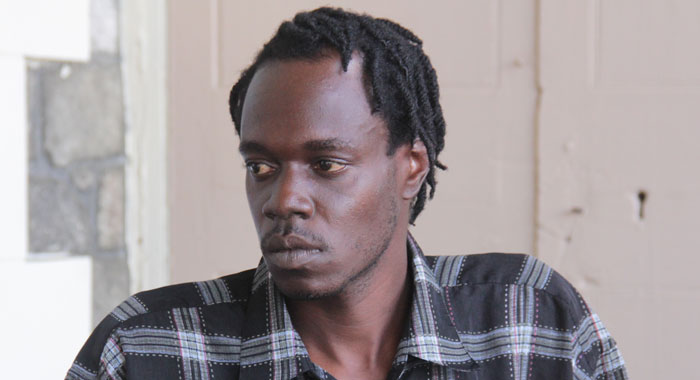 The defendant, Stevan Stephens escapes immediate jail time because of the forbearance of his uncle. (iWN photo)

The forbearance of a Buccament Bay man has saved his nephew immediate jail time in connection with an October 2016 scissors attack.

“You should be grateful to your uncle for his forbearance, without which you would have been sent to prison for six years,” Justice Brian Cottle told Stevan Stephens, 28, at the High Court on Monday.

The judge ordered Stephen to pay his 53-year-old uncle, Randolph Stephens, also of Buccament Bay, EC$9,000 in compensation within six months or go to jail for one year.

And even as he handed down the sentence, the judge noted that one year is the maximum penalty for failure to pay a fine and added that this is something that has to be looked at.

But, he further highlighted the seriousness of Stephens’ crime by ordering him to pay an EC$2,000 fine forthwith or go to prison for one year.

“You need to behave yourself Mr. Stephens, the judge added, and further bonded the defendant to keep the peace for two years or serve two years in jail for the offence against his uncle.

“He must understand that what he has done is a serious thing,” Justice Cottle said, adding that if the sentence causes financial pain, it is all part of the punishment.

The judge, however, granted the request of the lawyer that the court give Stephens until Friday to pay the fine.

The facts of the case are that Stephens and his uncle were not on speaking terms.

On the date in question, about 12:20 p.m., the complainant went to Buccament Bay beach, where he was given two buckets of tri-tri to sell.

He took the buckets to the riverside to clean the tri-tri and while there, Stephens came over wearing a backpack.

The two had a heated verbal exchange and as a result, the complainant picked up two stones after he saw his nephew push his hand into the bag and advance towards him.

The complainant dropped the stones and Stephens stopped advancing.

The defendant then walked away and the complainant went back to cleaning the seafood.

While cleaning the tri-tri, the complainant heard someone shout something and he looked ahead to see Stephens charging towards him.

The man began to run, but fell in the river.

Stephens then stabbed him twice in the back with a pair of scissors, resulting in two 1 cm wounds, one of which was 3cm deep.

The complainant got away and made his way to the Layou Police Station and reported the matter.

Stephens was represented by counsel Richard Williams, who noted that his client had pleaded guilty at the first opportunity.

The lawyer said that Stephens is gainfully employed and regrets the incident, and has not apologised to his uncle because of his bail conditions, which prohibited contact with the complainant.

He asked the court to order compensation and give his client time to pay and asked that any custodial sentence be suspended.

One reply on “Man ordered to compensate uncle for stabbing”