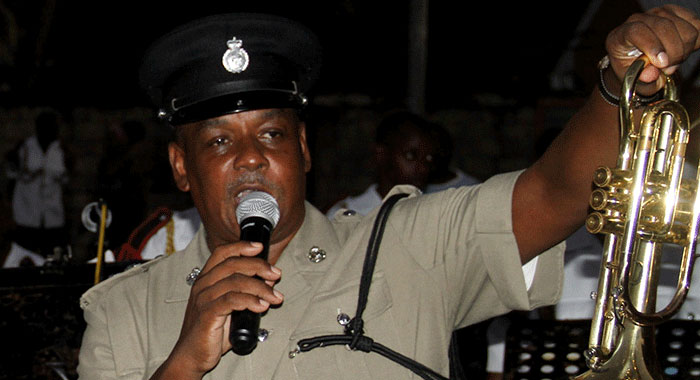 ASP Daniel Hall, head of the Police Force Band demonstrate an instrument at a Police Band concert in Layou on Dec. 21, 2017. Hall died on Tuesday, after a brief illness. (iWN photo)

Hall died on Tuesday at his home in Lower Questelles (Roucher Bay) after a brief illness, the police force said in a statement on Wednesday.

“Mr. Hall had a long and distinguished career as a police officer. He was first enlisted as Band Cadet on April 1, 1982. Having served in that capacity, he enlisted in the Royal St. Vincent and the Grenadines Police Force on Jan. 10, 1986 and was assigned to the Police Band.

“He served the organisation and the people of St. Vincent and the Grenadines for 34 years, one month and 22 days; all of which was spent at the Police Band. At the time of his death, he was the Police Bandmaster,” the statement said.

“The Commissioner of Police, Mr. Colin John, the deputy commissioner of police, the assistant commissioners of police, gazetted officers and all other ranks of the Royal St. Vincent and the Grenadines Police Force extends deepest condolence to the family and friends of the late ASP Daniel Hall. May his soul rest in eternal peace,” the statement added.