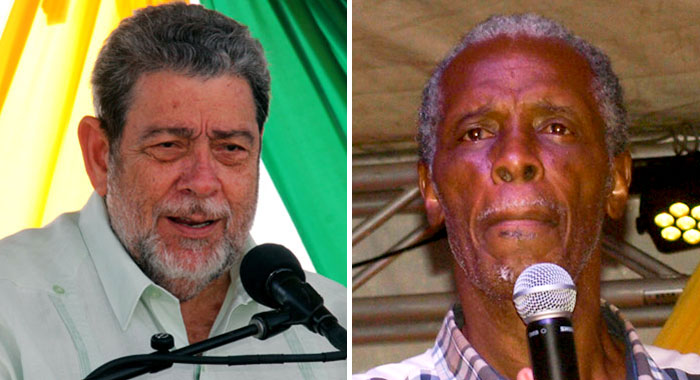 Prime Minister Ralph Gonsalves says that former MP for South Leeward Jerry Scott was “an outstanding member of the NDP, the NDP government”.

Gonsalves, whose government delayed the payment of Scott’s gratuity after he and his party were voted out of office in March 2001, made the comment on radio on Monday.

Scott did not attend the honouring event, which formed part of a rally to open Stephenson’s new constituency office.

He told iWitness News on Wednesday that he had already committed to attending a funeral when he was told of the honouring event, but was and is still prepared to accept the honour.

In his radio comments, Gonsalves said:

The prime minister noted that Scott was a government minister while he represented South Leeward and had been a senator before then.

“And every election, the NDP, since 2001, the NDP goes towards Jerry to try to butter him up — opportunistically. All in between, they don’t seem to have much time for Jerry until election time.

“Because they consider that Jerry has had and he would still have, particularly among some of his older supporters, certain influence that these people may have affection for him,” the prime minister said.

Gonsalves suggested the form that an honouring of Scott should take.

“Now if you really going to honour the man — and I give a summary background about him — you going honour him at essentially an event whose main purpose is the launching of an office and gathering maybe, I don’t know 100, 150 people or whatever the number people you’re gathering, or do you have a special event properly organised whether at a convention or you have a special event for his honouring?”

The prime minister said such an honouring should be devoted entirely to Scott.

“You have his family, his children in different parts of the world; make sure that they come back. I’m giving them advice as to how to do things. Perhaps some proper present for him, maybe even get a brochure prepared with photographs of projects, which Jerry did. Things with which he was associated nationally, have photographs with him in different circumstances a booklet, 10, 15, 20 pages,” Gonsalves said.

He said such a brochure should be long on photos and short on words.

Gonsalves continued: “… maybe even at the same time, you get one of these bright young men who can research the archival material from radio stations and from TV station to put something together to show on the evening when you honour him, maybe on a special half an hour programme on television. Well, that’s an honour. But what you do there is an afterthought.”

The prime minister said he did not know why Scott was not present at Saturday’s event.

“So I’m not getting into that,” he said.

“But this just shows you that these guys are not prepared for governance. If you treat a man like Jerry that way the people in South Leeward must be saying, ‘Well, how would the NDP treat us?’ That’s an obvious question.”

Gonsalves said he and Scott have been “political competitors not in the same constituency, but we but we have an on-going respect for each other.

“And Jerry’s wife is a magnificent woman and the children I mean, they are accomplished, for instance, a medical doctor, but that’s not the only one…

“Look, treat the man with some respect and some dignity… not even a proper curry goat game? I mean it’s pathetic. It shows weak leadership on the part of the NDP and it shows their lack of planning,” the prime minister said.