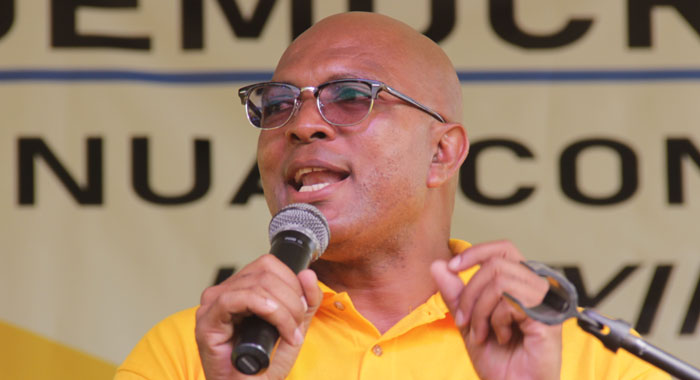 Member of Parliament for South Leeward, Nigel “Nature” Stephenson says that South Leeward is a good place to study archaeology.

He made the point on Saturday, saying that the infrastructure built under the New Democratic Party (NDP) administration between 1984 and 2001 has been left to go to ruin.

“I’m happy that you’re here because we are a constituency that has been neglected,” Stephenson, an opposition MP said Saturday night at the opening of his new constituency office in Campden Park.

In support of his argument, Stephenson, a member of the NDP, pointed to the condition of the clinic in the village and the government attitude to the community centre.

He said that under the stewardship of Jeremiah Scott, an NDP politician, who represented the district from 1984 to 2001, South Leeward was “a constituency that was booming.

Stephenson said that since the ULP came to office (in March 2001) everything that Scott and the NDP did “is left to rotten.

“I’ve said in the past that what we have in South Leeward now is just relics. So for those persons who are interested in the field of archaeology, you will recognise precisely — or you can get back to when the New Democratic Party left office, because everything that was done by the NDP or started by the NDP, it is in the exact same position.

“So we don’t want any government that has neglected us so badly. And I’m saying to you, it is time for us to get ourselves into a state of readiness and say to the Unity Labour Party: you have outlived your usefulness; we do not have any use for you anymore. And it is bye bye, bye bye ULP.”

Stephenson said he has spoken in Parliament, on radio and in other fora about the dilapidated clinic in Campden Park.

He said he would pay anyone who could show him a worse clinic in the Caribbean.

Stephenson said a clinic is supposed to be a place where one goes to get better.

“But by the time you behold that clinic in Campden Park, you get worse. So I am saying to you, the New Democratic Party will refurbish that clinic, we will make it a clinic of one to envy in St. Vincent and the Grenadines…

“The people of South Leeward, Campden Park, and all the surrounding areas, you will get a facility that when you see it, you get better when you behold it.

The MP said that an NDP government will also ensure that there is always a nurse and a doctor on call there.

“So we will have a nurse’s and a doctor’s quarters right at the clinic there in Campden Park.

He spoke about the community centre that the Unity Labour Party reconstructed more than a decade after the roof collapsed.

Nonetheless, the community centre remains shuttered months after it was constructed, with the former ULP candidate and caretaker for the constituency, Jomo Thomas speaking critically about that move, saying the government was, presumably, delaying the opening until this year’s election campaign.

“And you all know what was happening there at that community centre, church took place there, funeral services took place there, skills training took place there. And also the community used it for social activities and for years, that roof collapsed and it took the efforts of the New Democratic Party in the person of your humble servant to go to the parliament and press them to do something about Community Centre.”

He said that the foundation of the building was well constructed, saying this was evident when work on the new centre took place.

“… it had to take a tractor, a machine to get to uproot all the steel that was so deeply embedded in the ground.

“And they built over something. You know why they did that? Because, effectively, what they were trying to do is to destroy the legacy of Jerry Scott,” Stephenson said.

“I hope people understand that — that the good work that would have been done, the unity Labour Party is intent on erasing all of it…”