COVID-19 in SVG: Still no date for completion of isolation facility 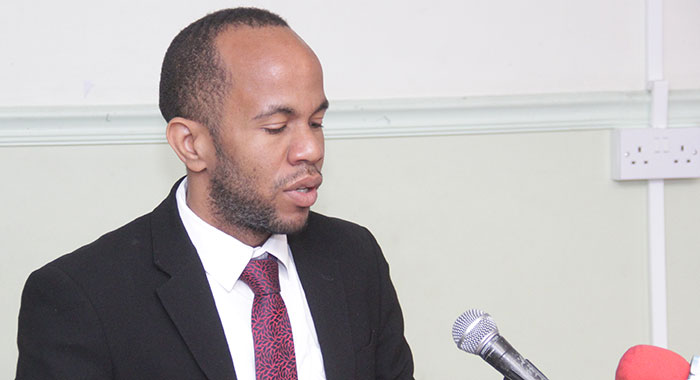 Minister of Health, Senator Luke Browne was, on Wednesday, unable to give a targeted completion date for an isolation facility in St. Vincent and the Grenadines, even as the country registered its first case of COVID-19.

At a press conference on Feb. 28, Browne announced that his government had identified a property in Argyle “which I think is this culturally suitable, maybe even a godsend” for use as an isolation facility.

“And we have to do some significant work on it to make it ready. I’m not sure that I could comment specifically on a timeframe, no, but what I could say is that the work has commenced, we are basically on the verge of concluding a lease arrangement,” he told the media then.

However, on Wednesday, when asked about the isolation facility, the minister said:

He said that the confirmed case of COVID-19 in SVG was “an additional impetus for us to do so”.

The health minister said that since the press conference in late February the government has “taken several steps forward and we look into carry out the retrofitting works at a cost of $100,000.

“I believe that these things would commence very soon, in fact, this week and hopefully, in a week, in a couple of weeks, we’ll be in a position to use it properly for the purpose intended. So as soon as possible, essentially,” Browne said.

Speaking later in the same press conference, when pushed or a targeted completion date, the minister said:

“And also the question has to do with the timetable not so much for the commencement of work because work has commenced and the isolation facility that we discussed in Argyle, but for the completion of work.

“I wanted to be able to be informed by the persons who are actually carrying out the work on a particular — on the deadline. I made a commitment that we’re going to get it done as soon as possible. And you could rely on us to drive that process forward to its conclusion, but I wanted to have the benefit of a direct date or recommended date or deadline date from the persons involved in the work before I report that publicly.”

He said that his ministry thinks that the side is “very suitable site”, adding that is located away from other residences.

“It is largely in a remote area that is behind the airport. So it’s suitable. And we’re hoping to get it up and running as soon as possible.”

Asked if when his ministry contracted the retrofitting works, if there was a timeline by which they work was to be completed, Browne said:

“We have we have preliminary timelines for the completion of the project. But again, in light of this development, I think it is prudent for us to be guided in this new situation by a review of dates which are on the table before we make a public statement.”

Asked what was the preliminary date for the completion of the facility, the minister said:

“Well, I think that we should be guided by any further information.”

And, speaking at the same press conference, Chief Medical Officer, Dr. Simone Keizer-Beache said she knows “everyone is very anxious about the completion date”.

She, however, said that the public should not think the country had no capacity “to isolate someone and manage them in a sufficient way.

“We do have capacity. Our aim, in terms of the facility at Argyle, is to expand that capacity and to have a unit that is separate,” Keizer-Beache said.

“However, if today, if that patient had been found to need hospital care, we have a facility. So, let us not think that we do not have the capacity to isolate in a healthcare facility adequately. It’s just that we recognise that we should have additional capacity in a separate location, and that is what we are aiming to do. You have capacity and we have capacity to manage more than two or three persons as of today. That’s one thing,” she said.

At the press conference in February, Keizer-Beache said that that capacity could be scale up to 28 persons.

SVG’s testing for COVID-19 is being done in Trinidad and Tobago.

And, on the matter of in-country testing, Browne reiterated that his ministry had said that it was hoping to have such capabilities by the end of March.

“… and we are sticking with that time frame,” he said, adding that SVG  does not face a constraint as far as testing capacity is concerned.

He said Kingstown has a very efficient testing arrangement with the Caribbean Public Health Agency in Trinidad and Tobago, which was used to test the case that return a positive result on Wednesday.

Browne said that notwithstanding those arrangement, “we still working actively on getting the capacity in place in house by the end of this month. And of course, we if we could get it tomorrow, we will push to get tomorrow.

Speaking on radio on March 2, Prime Minister Ralph Gonsalves said SVG needs an isolation facility and not only because of COVID-19.

The prime minister said “the way the world is and the way we communicate and the way people move and the way some people do things in laboratories and all what happens” there will be more frequent outbreaks of viruses.

“So, we have to equip an isolation facility and keep it properly equipped. So this is not only for now.”

2 replies on “COVID-19 in SVG: Still no date for completion of isolation facility”