‘Put the money where the pain is’ — Opposition Leader 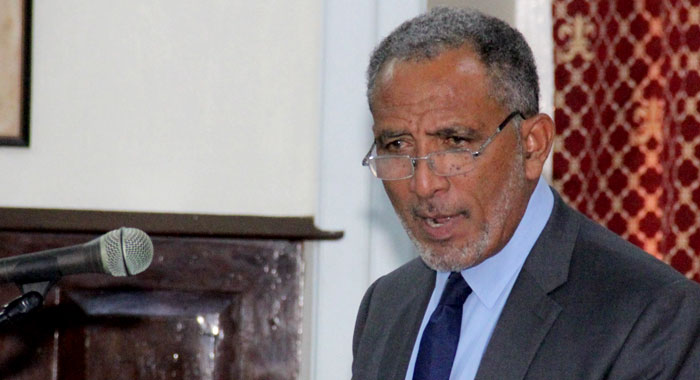 Leader of the Opposition Godwin Friday, on Tuesday, called on the government to allocate monies in the supplementary budget primarily as income support for Vincentians affected by the COVID-19 pandemic.

He said that the government should, therefore, fast track implementation of the EC$46.9 million capital budget that Parliament approved in February before the pandemic began affecting St. Vincent and the Grenadines.

Friday made the point while debating the EC$74 million supplementary estimates occasioned by the COVID-19 pandemic.

The additional monies include a further EC$29.6 million for road building programmes.

The opposition leader said these funds, along with the EC$1 million in additional revenue for post COVID-19 tourism advertising, as well as some other allocations, should be allocated to help citizens whose income has been impacted.

“All I’m saying, is put the money where the pain is. The long-term investment in the infrastructure, a lot of that is already included in the budget. Accelerate the process,” he said.

“You can’t have a situation when nearly $30 million going to fix roads and paint buildings. People are hungry; their spirits can’t be lifted by a pretty building. We need to provide those resources and that is where I believe the emphasis ought to be.”

Friday said that the income assistance programmes constituted the smallest part of the supplementary estimates.

“And this is where the pain is really being felt. This is where the funds must be allocated. I will urge that the government reconsider how the 60-odd million dollars that are going to be spent here, how they are prioritised so that they give a very clear signal that we are focused on health and the economic well-being of the people who are directly affected immediately.”

He said that the impact on taxi operators is significant but they are only being offered a one-off payment of EC$500 in income support.

Friday asked whether this amount would also be given to taxis that operate from Argyle International Airport, noting that they would basically have no business because of the suspension of flights.

“I’m of the view that the estimates as presented here don’t quite reflect that urgency. Naturally, whatever there is in assistance that will be provided to the people, we will support that,” Friday said, adding that opposition lawmakers know that the need is urgent.

“Because we know that the need is urgent. People don’t want us to be here, holding up assistance that they are getting, even if it is small, inadequate, and maybe for a short timeframe,” the opposition leader said.

He said citizens want lawmakers “to understand the depth of the crisis that they are in and to provide the necessary means to deal with it.

“I believe that the goodwill and intention is there in this honourable house. I don’t wish to question anybody’s motives. But we need to feel the pain and it needs to be reflected more in the spending that is here,” he said.

The opposition leader said that the fiscal package spoke to “post-COVID”.

He, however, said that lawmakers do not know when post-COVID will be.

“The question is now as a matter of priority could those funds not be better spent to assist those persons in the informal sector that we speak of — the people who are self-employed, the minivans where there is an allocation of a near $700,000 for assistance.

“These are funds that are needed now; immediately. And they should go towards helping those persons who are in the vulnerable industries to deal with this particular crisis now.”

He said that while an additional EC$1 million was budgeted for post-COVID tourism advertising, funds were already allocated for this in the budget approved in January, as is the case with the Ministry of Transport and Works.

“There is an amount of $46.9 million in the capital estimates for the Ministry of Transport and Works through all kinds of roads building programs,” he said.

He further said that Budget 2020 includes EC$2.8 million for the construction of secondary and village roads and EC$2.1 million for the Pedestrian Access to Village Enhancement (PAVE) programme.

“The question is how do we implement that? It seems to me that given the current crisis, that the majority of the funds, a larger component of the funds really ought to be allocated to helping people deal with the current crisis in paying their rent, supplemented incomes, helping to pay their electricity bills.”

The opposition leader said there are many stories of people meeting it hard, having lost their jobs as a result of the pandemic.

“Two hundred or $300 in supplementary income for a period of time is not going to do it. My preference and certainly the recommendation on this side of the house is that we shift the balance more now in favour where a greater allocation would be to deal with the immediate needs of the people now,” Friday said.

He said that minibus operators have been encouraged to observe the physical distancing guidelines.

“I’ve heard complaints that if you’re running at nine persons per van that you may not be able to make ends meet. Yet we have allocated a mere $700,000 in the supplementary estimates to assist the minivans and a million dollars for post-COVID advertising to the Ministry of Tourism,” he said.

The opposition leader described as “an innovative and welcome move” the decision by the National Insurance Service (NIS) to allocate EC$2 million for unemployment benefits.

“But you will see, for someone who was making, $1500 dollars a month, and is laid off, $300 a month doesn’t really substitute for that lost income in any way.”

He said the EC$2 million is insufficient, adding that the government ought to beef this up through its assistance programme “so that those persons would be able to make more and maintain their purchasing power, but moreover, to look after their families in this time of crisis.

“So, the two areas that I wish to have the assurance of this honourable house is that this situation with respect to our healthcare system, that we don’t simply accept that what we have now is what we are going to have two months from now, two weeks from now, this is going to be with us for quite some time. And, we have to give the assurance to people that we have the tools in place,” Friday said.