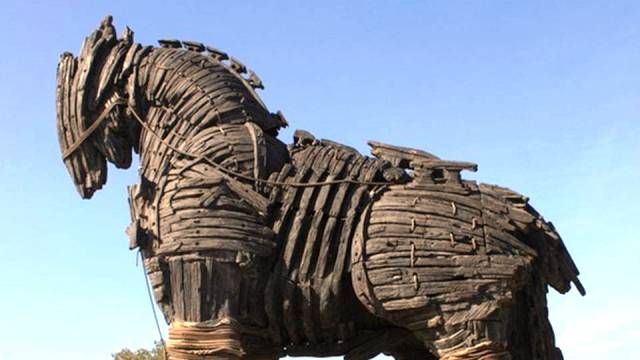 COVID-19 presents an opportunity, but for whom?

When I think of the current pandemic, aspects of it remind me of two stories in particular: The story of the Jewish Scapegoat and the story of the Trojan Horse in Homer’s Odyssey.

The scapegoat always carried a blame that was not its own but which was conveniently placed on it.

The Trojan Horse, on the other hand was an instrument of subterfuge through which the Spartan warriors were able to breach the well defended city of Troy. The great tragedy of that story is that it was the otherwise invincible people of Troy who were the ones who actually opened their gates to pull the Trojan Horse into their city, to their own demise.

In light of recent unfolding events, I am left wondering if in some ways the current pandemic is possibly becoming a scapegoat, while in some other related ways, it is a Trojan horse.

Two words to think of here are “convenience” and “opportunism”.

And, the questions to be asked are: Does COVID-19 present a convenient opportunity? Are there ways in which the crisis can be capitalised on? Do the severity of the pandemic and the ensuing fear of the people provide opportunities that may be exploited?

Now, let’s be clear. I am in no way denying the reality or gravity of the crisis. It is real! But, can it be that within the belly of this Trojan horse lies the destruction of certain societal structures that had been well defended hitherto?

What are these societal structures of which I speak? I refer specifically to individual freedom, right to privacy and the protection of civil liberties. For centuries, these have been considered to be inalienable rights, not to be easily surrendered. People have fought, bled and died to achieve these societal bastions. Once achieved, these are traditionally fiercely defended in democratic societies across the globe, and are not easily surrendered.

What are we seeing across the world as this crisis unfolds? These societal structures of freedom, privacy and civil liberties that have for long stood secure behind their Trojan walls and gates, are now being encroached and are undeniably in jeopardy. A few short weeks ago, it would have been unthinkable that people in democratic countries will so readily have their freedom of movement circumscribed and dictated to them by a governing authority?

Nor would we have thought that such invasive surveillance (which is an affront to individual privacy) would have been perpetrated in democratic countries. In case we haven’t realised it, we are witnessing a modern day conquest of Troy, and the Trojan horse (aka the scapegoat) seems to be the COVID-19 crisis.

Now, why do I say this? I cannot recall any period over my lifetime in which these sacred and inalienable rights have been so easily surrendered without much of a struggle. The vagaries occasioned by the dread of the virus seem to have stripped most people of any desire to confront and withstand this assault on these societal structures.

In the same manner in which the people of Troy unwittingly escalated the destruction of their city by dragging the Trojan Horse into their own gates, some seem too eager to allow the dismantling of their freedoms, privacy and civil liberties, all in the name of the contemporary Trojan Horse (of safe haven from the virus).

And why the comparison to this Greek myth? Make no bones about it, the Trojan Horse was very appealing and desired by the people of Troy. But, isn’t it the same way in which many crave a sense of security and safety as the threat of the COVID-19 looms? What was the mistake made by the people of Troy? They wanted the horse so badly that they did not stop to think.

Authorities the world over are promising a greater sense of safety if certain measures are imposed on the population, and the people seem not only willing, but actually eager to surrender certain rights and freedoms to gain such sense of security as the authorities offer. And like the people of Troy, who really is stopping to think?

Not that I am minimising the devastation being wreaked (in some countries) by the spread of the virus. Nor am I opposed to responsible efforts to check its transmission. Don’t get me wrong, that’s NOT my argument. Rather, I am asking how much individual freedom, privacy and civil liberties will you be willing to give up to purchase a greater sense of safety.

For some, this is a trade-off that they will make in a heartbeat. But, for others the stakes are too high. For them this Trojan horse is very appealing, but they are very concerned about what may lie deep within its belly. For such less enthusiastic people, George Orwell’s Big Brother society is more than a mere dystopian conjecture, but is a very real contemporary possibility which, once allowed through the gates (Trojan Horse style), will herald an erosion of individual freedom, privacy and civil liberties.

This goes beyond speculation and conspiracy theory. Almost daily I hear Western media lauding authoritarian regimes as models for effective control of the spread of the virus. Drastic measures that curtail individual freedom are applauded. The media approve the heavy-handed manner in which some countries have used technology to invade and violate the privacy of its citizens “for the greater good of society”.

The strong-arm actions which have been used in some authoritarian countries to “necessarily” curtail the civil liberties of citizens have been hailed as exemplars for Western democracies. So this is no idle speculation. And, Western governments have taken the bait and have begun the process of truncating individual freedom through legislation that threaten fines and even imprisonment for those who dare push back.

I could almost sympathise with those who readily call for such authoritarianism to be introduced in Western democracies. After all, this is a matter of survival, right? Desperate times call for drastic measures. This seems to be the argument, and this is further exacerbated by the seemingly unending stories and statistics of devastation and gloom pumped out daily by the media.

And unsurprisingly, the more dreadful the situation appears, the more palpable the fear of the people and the more willing they are to pull in the Trojan horse (which promises a measure of safety) without a careful examination of what lies within its dark underbelly.

And when this Trojan horse spills its guts, what will unfold? How much monitoring of individuals will be deemed as “indispensible” for the protection of society? How extensive will the “necessary” restrictions on civil liberties be? To what extent will freedom be curtailed in order to obtain what the authorities see as desirable outcomes?

How invasive will the authorities be in order to be thorough in managing a society in crisis? How will various technological devices and apps (many of which have been launched since the outbreak of the virus) be used to monitor the health, purchases, location, movement, etc. of citizens? How heavy-handed will governments be allowed to be when (in post-COVID period) it is deemed necessary (to make sure we never get here again, perhaps)?

There’s no mistaking it. This world as we know it is in transition and the pandemic is the gateway. I am convinced that there’s no going back to the world, as it was, pre-COVID. And what can we blame for such irreversible transition. Undoubtedly it’s the COVID-19 crisis.

It is not that these changes were not anticipated. Let’s be clear, the crisis occasioned by this pandemic is opportune for the implementation of a re-ordered world. The crisis is merely the scapegoat.

And what should we do about the Trojan horse? I hear governments near and far arguing to get their horse beyond walls and gates that guard your individual freedom, privacy and civil liberties, in order that you may have the safety and sense of security (from the virus) that you crave.

But the question must be asked, “What lies in the belly of that horse?” I have heard it said that one should not stare a gift horse in the mouth. But considering the gravity of what’s at stake, I will want not only to stare this one in the mouth, but to carefully examine its every hidden orifice.