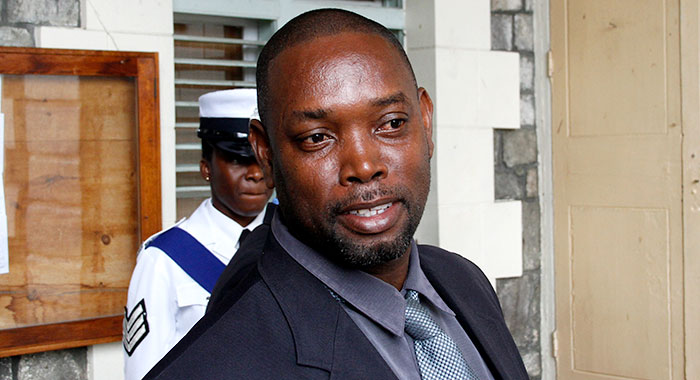 A retired police officer and brother of the detective who was shot and killed in Campden Park on Sunday says investigators should not rush to a conclusion about how he met his death.

Detective Sergeant Philbert Chambers, a 30-year-old officer of 11 years’ standing, died after being shot in the head while attempting to execute a search warrant at a house in Campden Park around 8:05 a.m. last Sunday, April 26.

In a 9:45 p.m. statement that same day, police said that officers, including Chambers, who was attached to the Questelles Police Station, went to execute a search warrant at the home of Gleason Lewis, 39, in Campden Park.

“At approximately 8:05 a.m., while the police were at Mr. Lewis’s home performing their duty, he opened fire killing Sgt. Chambers and wounding Police Constable 700 Verrol Sam in the process. The Police returned fire and Mr. Lewis was fatally wounded. Both men died at the scene. A coroner’s inquest will be conducted into this matter,’ the statement said.

Lewis returned to St. Vincent from the United States in February and should already returned but was unable to do so because of flight cancellation as a result of COVID-19.

There were concerns in the United States and the St. Vincent about the man’s mental well being after the break-up of his marriage.

iWitness News understands that when Lewis’ body was searched in the presence of one of some of his close relatives at the scene, police found a pistol in his waist, in addition to the one with which he killed Chambers and shot Sam.

Lewis also had 25 rounds of hollow point ammunition. It is not clear to iWitness News whether any member of his household had a firearm permit but Lewis did not have one, a source familiar with the investigation told iWitness News.

And, the slain cop’s brother, retired corporal Fitzbourne Chambers, who spent 21 years as a police officer, is warning about premature conclusions about what happened.

Chambers told iWitness News on Wednesday that while many know him as a narcotics officer, he received specialised training from the United States Army in crime scene investigation.

“Personally, because I heard that a number of shots were fired. Again, I will go back to my training in that we should not make judgment calls too early. Let the evidence speak,” Chamber told iWitness News.

“We should not go on a scene and determine that, unless we have clear cut evidence. Let the evidence speak. So I do want to say that the gentleman killed my brother or this happened or that happened. My thing is that both of them get killed and another police officer got shot,” said Chambers who now works in private security.

“And where weapons, multiple weapons, are involved, the evidence should speak with thorough investigation. From my training and my school of thought we should not just decide, because the worst evidence you could get is from people.

“It is proven all over the world. People went jail back in the days, spent almost all their life in jail because of eyewitnesses and so on — ‘I see you’ — and then the case is dismissed after many years.”

“But I know that they are limited and that is the downfall of our police force. I will plainly say so. I’m trained in crime scene [investigation] and in any incident; it is the crime scene evidence that speaks. So whatever evidence, how you collect that evidence and so on and the necessary training and so on will determine the outcome of an investigation.”

Chambers said that while he does not know what evidence his former colleagues collected from the scene of the killing, “I know, and I believe that they will do their best, but it’s high time that we upgrade our police force”.

He said while human evidence is important in police investigation, the scene of the incident would “speak more truth than a human, because humans, they can see stuff or they may think they saw certain things.

“Nobody should go and make a determination of something happening especially an incident like that. The evidence should speak because if I say that the man killed my brother, on what basis I’m saying so?

“Am I saying so for a fact without a doubt that this man killed my brother?” he said, adding that based on his training in law enforcement, a defence counsel would tear apart a case that is based on poor investigation.

Chambers said that he learned that there was surveillance system at Lewis’ house that might have recorded what happened there on Sunday.

“From what I learned, he had cameras and we had recordings and so on. He had a DVR (DVR) at the house. The police … took it and I know that would speak a lot. And that is evidence. That would speak a lot.” Chambers said, adding that hopes that the footage would be viewed before the coroner’s inquests are held.

He said Sgt. Chambers was shot on the right side of his head, just above his ear and the bullet exited at the back of his head.

Correction: An earlier version of this story incorrectly stated that hallow point ammunition is prohibited in St. VIncent and the Grenadines.