Jamaican jailed for attempting to export ganja from SVG 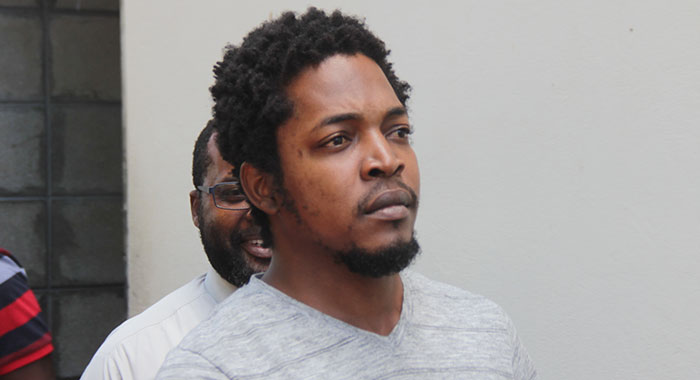 Novian Travis Vaughn Mullings is escorted back to prison to complete his sentence. (iWN photo)

A Jamaican man has returned to Her Majesty’s Prisons in St. Vincent and the Grenadines to complete a one-year-and-three-months sentence for attempting to export marijuana out of the country.

This means that he only has a few weeks remaining to complete his sentence.

Mullings was nabbed at Argyle International Airport (AIA) with 13,995 grammes (30.85lbs) of cannabis in his suitcase as he was waiting to board a flight to Barbados on July 28, 2019.

He was charged with possession of the drug for the purpose of drug trafficking and attempting to export the marijuana.

Chief Magistrate Rechanne Browne handed down a guilty verdict at the Serious Offences Court in Kingstown on April 27, after hearing closing arguments in the trial, which ended on April 24.

In arriving at her sentence, she noted Mullings’ age and the fact that he has a conviction in Montserrat for possession of cannabis for the purpose of drug trafficking.

Browne, therefore, sentenced him to one year in prison for possession of the drug, and one year and two months for attempting to export it.

Mullings’ defence was that the suitcase that he checked in was not the same as the one in which the drug was found.

His lawyer had argued that head of security at the airport, retired commissioner of police Keith Miller had only provided video footage from the publicly observable areas of the airport.

“Mr. Keith Miller had an obligation. He sat in the Commissioner of Police seat for over four years and had access to everything that can prove the journey of the suitcase. Why did he deny the court that?” Connell said.

“Is there something to hide? I don’t know,” the lawyer further said.

“It is not common sense that a man will leave Jamaica and come to SVG to carry back ganja,” Connell further reasoned.

He further stated that Mullings had said that his suitcase contained two bottles of rum, while the one in which the marijuana was found, contained the drug as well as a few items of children clothing.

The lawyer further argued that the crown had failed to prove when the tag bearing Mullings’ name was placed on the suitcase.

He said that any frequent traveller knows that baggage tags can be removed and replaced, without being damaged or requiring additional adhesive.

“Maybe if Mr. Keith Miller had presented what he had access to, to show the suitcase in Mullings’ hand, the tag being put on… Only God know what happened to Mullings’ suitcase when it went behind those curtains,” the lawyer said.

Mullings’ suitcase was physically examined after a junior security officer retrieved it from a trolley, even after the senior officer on duty and other security officers had concluded that the suspicious items shown on the display of the scanner were food.

Delplesche has earlier argued that the case was a simple one, in that Mullings turned up to the airport, bound for Barbados and checked in the suitcase.

“The electronic evidence shows that the defendant did go to AIA and checked in a suitcase. The suitcase showed a tag issued by the airline and the defendant’s name and that matches his boarding pass,” Delplesche said.

He said that the passport and boarding pass were exhibits in the case.

The prosecutor said that Mullings admitted that he came to SVG on July 25, 2019 and was permitted to remain in the country for six months.

He, however, spent three days in the country, and told authorities that he had come for vacation to visit a friend.

When he was confronted, Mullings told police he had checked in a suitcase but it didn’t appear to be the one in which the drug was found, Delplesche recounted.

It was not until he was shown the boarding pass that Mullings said that someone at a guesthouse in Kingstown gave him the suitcase to transport.

The prosecutor said that the suitcase was checked in at the airline, was sent to the scanner, where a security officer spotted it and raised an alarm.

The bag was later checked and found to contain the marijuana.

“That is enough to prove possession,” said Delplesche, who had earlier detailed the legal principle of possession.