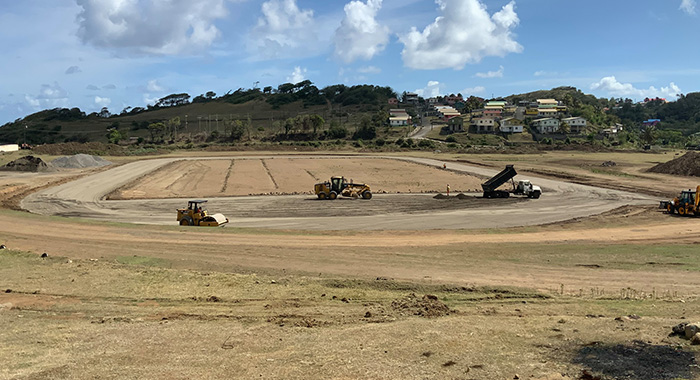 Work on the Diamond athletics track would have to be suspended if certain things are not compete before the raining season. (Photo: Camillo Gonsalves/Facebook)

Projects, including hotel projects and the Diamond Athletics track in St. Vincent and the Grenadines could be affected in different ways as a result of the COVID-19 pandemic.

The government is building two hotels, one at Diamond, and another at Mt. Wynne, which will be managed by international hotel chains.

However, large construction projects, both private and public, have been affected by the COVID-19 pandemic.

“It depends on where you are in the project cycle to see how badly or how well you’re going to manage this process,” Minister of Finance Camillo Gonsalves told a press conference in Kingstown last week.

To illustrate, he said the supervising engineer for Long Line Road project is an Italian firm that has to come to St. Vincent and the Grenadines to sign off on work that has been completed to date before the next phase can begin.

“… you know the trouble with Italian people travelling generally, given that that was one of the hotspots of the outbreak,” the minister said, adding that even if the engineer could travel, there is no way to get to SVG, because of suspended flights.

“So that project, if that can’t be resolved shortly, will stall.

He said that the private sector project at Calliaqua for Rainforest Seafood has halted because again it requires supervising engineers out of China to erect the steel frame of the building.

Royal Mills Resort, at Royal Mill, which is also a private sector project, and the renovation of The View — the former Grandview Hotel — are still ongoing but at a reduced rate.

“For physical distancing reasons and for cash flow reasons, they have reduced their team on site,” the finance minister said.

Meanwhile, he said that the athletic track being built at Diamond has a German supervising engineer for the next phase.

“There’s one German in Germany, who is unlikely that we will be able to get and the other engineer happened to be stuck in Costa Rica. And we’re trying to see what we can do to get that engineer out of Costa Rica before the rainy season begins in earnest.

“Because once the rains begin, that project will have to stop. Because of the precision required, you can’t do it really in the rain.”

The minister said there are other projects, however, that will continue apace.

These include coastal defence work at San Souci and Georgetown.

“That is work where the money is in hand that is not particularly labour intensive. You’re operating crushers; you’re operating large cranes that place x-pods in various locations for coastal protection.”

Gonsalves said there is a coastal protection project that is about to begin on the lower part of the Buccament River.

“That project is not expected to be adversely affected.”

The finance minister, however, said there is a lot of roadwork funded by the OPEC Fund for International Development and require the presence of supervising engineers out of Kuwait.

“And until they can get here, those projects will also stall. So it’s a mixed bag,” Gonsalves said.

He said the government had predicted a very robust capital works programme in our 2020 Budget that Parliament approved in February.

Gonsalves said last week that this was “one of the most ambitious capital works project programmes ever.

“We’re gonna have to scale back that ambition. I think that if we had predicted $300 million, optimally, in capital works this year, we have to half that realistically, because we’ve already lost considerable time and because either supply chain challenges or challenges related to individual supervising engineers coming on site are a problem.”

Regarding the project to construct a new port in Kingstown, the work to relocate the residents will continue and will be completed as scheduled, the minister said.

“But the beginnings of the port work — realigning the sewer, line beginning some of the reclamation — that will not begin this year, because for the bids to be received, all of those engineers and all of those bidding entities had to … visit the site, put in estimates.

“That is going to delay all of that activity into early next year, at best. So it’s a mixed bag; on some of the major projects, we will continue. It will seem as if nothing has changed. But on some very significant projects, we anticipate a delay of at least six months on the work,” Gonsalves said.

3 replies on “Pandemic could delay some major gov’t projects”