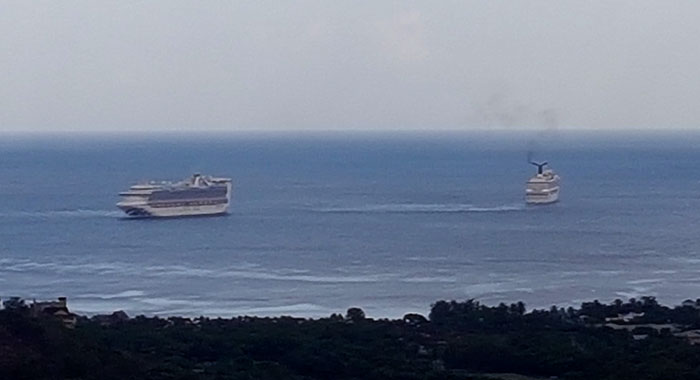 The two cruise ships off Buccament Bay on Saturday.

Ninety Vincentians sailors are expected to arrive home today, Saturday, on board cruise a ship that is currently in Vincentian waters.

The vessel, Carnival Glory, is believed to be one of two that had been seen off the southern coast of St. Vincent Saturday morning.

Marshall said that two vessels had been expected to dock.

However, as they are both owned by the same parent company, Carnival Cruise Line, one sailor was transferred from Caribbean Princess to the Carnival Glory.

The transfer occurred off the leeward coast of St. Vincent early Saturday morning and Carnival Glory is expected to dock in Kingstown sometime after 11 a.m.

The government spokesman said that the CMO had indicated that those sailors who are cleared after medical and other checks will be sent home to quarantine there.

Those who are not cleared will be taken to a “public facility,” Marshall said.

Asked if a public facility refers to a hotel, Marshall said, “a facility engaged by the government for that purpose”.

Recently, there has been some discussion after it was observed that lights were turned on at Buccament Bay resort, which has been closed since December 2016 when the electricity was disconnected, amidst financial problems.

The government has been trying since then to woo a new investor for the project; the last promising negotiations fell apart last year.

Asked at a press conference last week about the lights seen recently at the resort, Minister of Finance Camillo Gonsalves said:

“We hope; we remain hopeful that that we will have a positive announcement on Buccament Bay in the near future. The facility needed some cleaning. And there was some investigation about whether or not the facility could be used in the interim for various services over the course of this crisis.”

iWitness News was reliably informed that the water connection to the resort has also been restored.

Hundreds of Vincentians sailors have been stranded on board the cruise ships on which they work since the declaration of the COVID-19 pandemic.

There is bipartisan agreement for their return home. However, the government has been locked in negotiations with at least one cruise line, Royal Caribbean, over payment for quarantining of the sailors in SVG after they return home.

Keizer-Beache and other health professionals welcomed the group on arrival and walked them through registration and health checks.

Keizer-Beache said that health authorities had information on these persons prior to arrival in the country.

“We required that they submit their names, their passport numbers to verify they are Vincentians and then we went through a process of determining whether or not their homes were appropriate for quarantine — that you have a bedroom and bathroom, preferably to yourself.”

The CMO disclosed that for persons who did not meet the requirements for home quarantine, the authorities found suitable accommodations for them.

Before going through Immigration at the AIA, the group was registered and basic checks were administered such as “temperature checks.

“They were also asked about signs and symptoms of COVID which would be cough, fever, shortness of breath, and any possible exposure to anyone who might have been COVID positive. They also had their blood drawn for rapid COVID antibody tests.  According to the CMO, if during the initial assessment, anyone was found to have a temperature, they were swabbed immediately for PCR.

Following the checks, the CMO said, the group had their hands cleansed before going through Immigration.  Persons collected their luggage and were allowed to leave in pre-arranged transportation to their homes or to quarantine sites prepared for them.

She further said that persons were instructed where they should sit in the arranged transportation and ensure that their “masks never come off until they get home or to the quarantine facility.”

Speaking during a press conference on Thursday, Minister of Health, Senator Luke Browne said that of the 22 persons who returned from the BVI yesterday, 18 were allowed to quarantine in their homes or in pre-arranged accommodation for that purpose and four were sent to a quarantine facility.