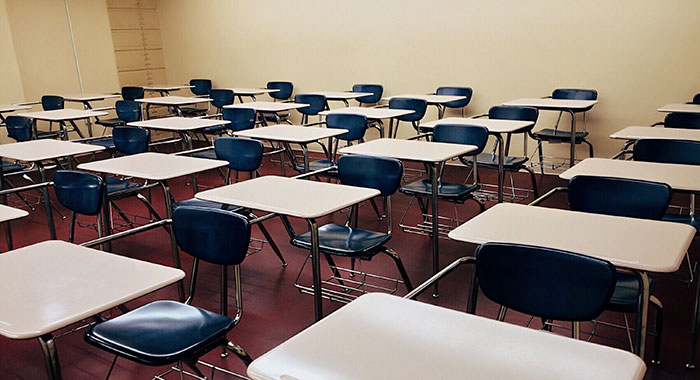 The Ministry of Education is proposing to reopen schools next Monday, May 18, Minister of Education Jimmy Prince said on Sunday.

“…  the officials of the Ministry of Education along with the experts at the Ministry of Health, set up a kind of tentative preliminary timeline. We’re thinking maybe if we open school maybe the 18th of this month, or 25th, or thereabout, preferably the 18th, we might be ready to open school at that time,” Prince said on WE FM.

He said that while this is the ministry’s timeline, it is “not cast in stone because we have to have these things in place to ensure the safest environment for both teachers and students.”

Prince said that health and safety is paramount in his ministry’s determinations or activities.

“We have always looked at that. That’s why we closed school on the 20th [of March]. That’s over a month ago. So we would want teacher and students be comfortable in the environment and also for parents to feel confident that these children have gone to a place where they will be safe.”

Schools have not reopened since closing one week ahead of the Easter break, as a result of the COVID-19 pandemic.

There have been discussions about whether or when schools should reopen — with just about seven weeks left to before the scheduled end of the academic year.

“I think that was the original timeline that the ministry, in conjunction with the Ministry of Health, was proposing. We should use that as our target and if we meet it, fine, if we don’t meet it we just put it back a little bit more,” Prince said of the May 18 date.

Prince confirmed as a proposal from his ministry a document that emerged on social media last week.

Education officials were also proposing that Grade 6 students submit their school-based assessments (SBAs) by May 29 ahead of their primary school exit examination on June 25 and 26.

The final submission of Form 5 students’ SBAs was proposed for May 23, and CAPE SBAs by June 6.

The proposed date for CPEA was June 25 and 26, with the ministry saying that most schools would do their examination at their respective campuses, rather than in Kingstown, as had been the case previously.

The document said there would be no internal examination in schools, and spoke of promotion with remediation for primary and secondary school students.

In secondary schools, where students have to make subject choices, the Terms 1 & 2 assessments will guide such placement, the proposal said.

The terms will end on June 26 and school would reopen on Aug. 17 for the new school year.

The first term of the 2020-2021 school year would end on Dec. 18 and students would get two weeks’ Christmas vacation instead of the usual three.

Prince, however, indicated that the was not yet intended for the public

“But somebody who probably wanted to be in the know decided to leak it. You know how St. Vincent and the Grenadines is,” the education minister said.

“We have no secrets. If you’re gonna propose something you have to put some timelines and in any strategy you have to do that.”

He said that since then, his ministry had gone to the Cabinet with a proposal.

“Well, of course we are at the mercy of pandemic. However, we have been looking at whether are we going to lengthen the terms, shorten the vacation time and probably getting some other ways of getting the children to do extra work,” he said.

“This pandemic has given us the opportunity to use online learning a bit more,” he said.

He said his ministry has been talking about the impact of the pandemic on current Form 4 students regarding what happens in 2021 and how the ministry is going to ensure that children continue their education in a way that the ministry expects.

“We have been trying to do certain things because the Ministry of Health has advised us that before we even start to talk about opening of schools, there are some things that we have to get done, certain things have to be in place.

“You have to talk about cleaning, and sensitisation — I think there’s a difference between these two, running water present in schools, sinks for washing of hands, accommodation for adequate physical distancing, among other things.”

He said that the ministries of health and education and the Roads, Bridges and General Services Authority, (BRAGSA) did a comprehensive assessment of schools.

“The data has been collected, has been collated at the moment and we will look at that for possible swift action where necessary.”

The education minister said there are some schools “which we may not have to touch” while others need more facilities and repair to existing ones.

Funds have been earmarked under the Ministry of Transport for such repairs, Prince said, adding that the government has bought cleaning agents and wash stands and are having them installed in schools.

“So we have been doing that to ensure that when we eventually open school that we could have sanitation and hygiene components of the requirements in place.”

In the meantime, the ministry met with the Teachers’ Union last Friday.

“And we gave them information which they didn’t have before. I know, they were thinking that maybe we need to hold a little bit; let’s look and see what’s going to happen.

“But they’ve got new information and they’re going to meet with their members again, maybe Monday (today), and they probably will give us some idea. We have also been meeting with principals of both secondary and the primary schools mainly to determine what exactly is the best possible time and modality for the opening of schools,” Prince said.

The Ministry of Education is proposing a phased opening that that will see students who are doing external exams returning to the classroom first.

These include From 5, Grade 6, and TVET students

“These students will need engagement, maybe revision, etc., before attempting their exams. And I think that is quite obvious. Although they have been doing online work,” the minister said.

He said some principals have said it is important that these students be reengaged before their examines.

Other, however, have said that the syllabi were completed before schools closed for Easter and, therefore, it’s not necessary for their fifth formers to go back to school.

“I don’t know if that is so correct, because you’d never have enough time when you’re doing an exam… You still would need some engagement with the teachers but that is that is what it is that what that’s what we’re proposing”.

Prince said his ministry has decided to reopen school with these two forms because in addition to reengaging these students ahead of their exams, the entire school can be used for their classes.

“… it can spread out more if you have one Form 5 in an entire School, teachers can spread them out and you have the physical  distancing that is required by the Ministry of Health or by PAHO (Pan American Health Organisation), etc.,” he said, adding that people would be able to wash their hands more often  and students would be more supervised by teachers.

“And in addition to that, we’re looking at transportation because you know, we wouldn’t want to have children jamming up … in buses coming to school on those mornings. That will be unsafe,” Prince said.

He said his ministry is “looking at specialised transportation.

“Of course, we have not concretised that yet. It is strongly in our minds, and we will be speaking with the Minister of Transport in that regard.”

Prince said that while the Ministry of Education is thinking of the phased reopening of schools, it continues “to broaden our presence online” with the delivery of online instructions, which he said has some challenges.