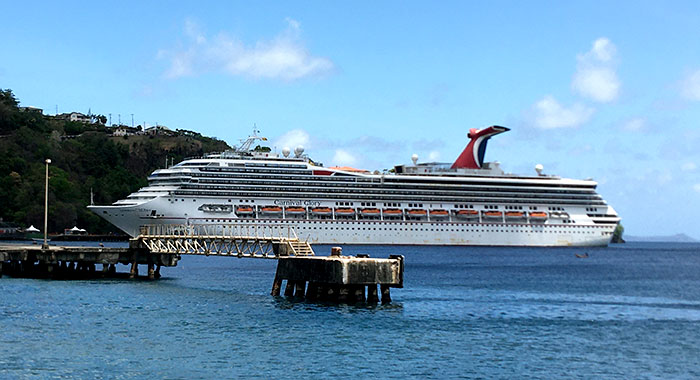 Carnival Glory, the cruise ship that repatriated 92 Vincentian sailors on Saturday had threatened to sail north again if Kingstown was not prepared to receive its nationals who were on board.

However, Prime Minister Ralph Gonsalves said he stood his ground, and the cruise line later complied with his government’s demand that each sailor be administered a rapid test for COVID-19 disease.

The cruise ship docked shortly after noon on Saturday, some five hours after it had entered Vincentian waters.

It brought with it 92 Vincentian seafarers, the first to return home since international flights have been disrupted, resulting in crew members spending weeks on board their vessels as a result of the COVID-19 pandemic.

St. Vincent and the Grenadines has established an eight-point “Protocol for the Repatriation of Vincentian Crew Persons”.

Vincentian sailors and oilrig workers hoping to return to home amidst the COVID-19 pandemic must have a certificate of health issued by the authorities in their country of departure.

The health certificate must include information about the person’s exposure to any COVID-19 positive or suspected cases and any objective screening for COVID-19 the returning Vincentian has undergone.

The document must include the name of the screening agency and the date when the test was conducted.

Carnival Glory arrived in SVG early Saturday morning after docking in St. Lucia the previous day and repatriating nationals of that country.

Information from Vincentian sailors aboard the vessel had said that they were scheduled to dock at 7 a.m.

However, on Monday, the prime minister, speaking on his party’s radio station, Star FM, said there was “an important call, which was made to me at 7:30 on Friday night.

“We outlined our position, they outline their position and never the twain met,” Gonsalves said.

“So I said to them … ‘One possible way out is if you can get the PCR tests done in Grenada, if they dock there or in Barbados within 24 hours and you send them here.  I’m told that the health authorities, they will accommodate that.’

“And they said that they don’t know if they can get that done. I said, ‘Well, if you can’t get that done, you just have to make the arrangements for St. Vincent in a very special way.’

“And they said to me, one of the officials said to me that, well, if they leave the Caribbean, they will be going to Mexico and they’ll go into Honduras and they will take over seamen and sea women, our seafarers, there and at the tail end, come back and come into our harbour.

“I said, ‘If that is the best you can do, so be it.’ So the fact that you are going to — you weren’t going to leave them. I just stood my ground,” the Prime Minister said.

According to the protocol, before repatriating Vincentians, cruise lines must also tell the government the total number of persons to be repatriated, their mode of arrival –boat or plane – and their full name, date of birth, passport number, contact number and address in departing country.
The cruise line must also provide Kingstown with the address of the proposed site of 14 to 21 days of the quarantine and contact number of persons residing where the person proposes to stay in SVG or who can facilitate the inspection of the proposed quarantine site.

The cruise line must also give the government the commitment of the repatriating company or individual to pay for the accommodation of those persons without an appropriate quarantine site.

The repatriating company could secure an alternate site approved by the Ministry of Health, Wellness and the Environment.

‘I am protecting their health and safety’

Gonsalves said that his stance last weekend was informed by a legal opinion provided by the Attorney General’s Chambers.

“And I had the protocols from the Ministry of Health, from the Chief Medical Officer. So I’m on a sound footing. I wasn’t going to be unreasonable,” the prime minister said.

Gonsalves had maintained that under international law, cruise lines have obligation to the seafarers, which include paying for the mandatory quarantine imposed by his government.

“Of course some other people have other legal opinions and they ain’t drill down into the thing properly including, I understand, a particular government.

“But we have drilled down into it properly and we have a sound legal opinion. And that’s what we follow. So you, nobody could bulldoze me on these matters,” he said.

He said that around 11:15 Friday night, he got a call from an official from Carnival Cruise Line saying they had actually found rapid tests kits aboard the vessel.

He said he told the person that it was a medical matter and the chief medical officer would have to weigh in on it.

“And they worked out their protocols and they started the tests the morning early [Saturday morning]. I think it’s six o’clock.’

The prime minister said that around 11:05 Saturday morning, he got another call from the Carnival Cruise Line official saying that the ship has been in Vincentian waters for a few hours but had not gotten clearance to dock.

“And I called Simone Keizer-Beache, our CMO. I said, ‘What’s happening?’ She said, ‘Well, I had to go over all the information which they sent, all the test information. I had to double check to see all who had come from which ships because we have had that information in advance so that she can work out who was going to go into quarantine.”
Gonsalves said the health officials in SVG had made checks on the sites (homes, apartments, guest houses, etc.) where sailors were proposing to undergo their 14 to 21 days’ quarantine.

‘They had checked, they had phoned people. They even, up to that Saturday morning, they were phoning people and also to check those who had to go into isolation.”

He said such after 11 a.m., the Port Authority gave the ship permission to dock

“In fact, she said to me, ‘I just sent a letter to Bishen telling him that I’m satisfied with what is happening and … they can come in after midday’,” the prime minister said, quoting the CMO.

Of the test that the ships conducted on the sailors, two were found to have COVID-19 antibodies, meaning that they had at some point been exposed to the illness.

The government placed these two sailors, as well as four others, who originally came from the same ship as them, into quarantine at a state-run facility.

“But always, the chief medical officer had made it plain that the authorities in St. Vincent and the Grenadines are controlling the disembarking. Because clearly if even a number let’s say 10, 15% of them had tested positive, a different ball game would arise.”

Gonsalves appealed to the repatriated sailors to not breach the quarantine orders.

“Because if they breach the quarantine, as sure as the sun rises, the authorities will get to know and it would not be pleasant. Similarly, those who are in isolation and there’s security and those who are in hotels, the other five, also their security, if they try to slip away there are certain consequences,” he said.