Scholarship in honour of slain cop 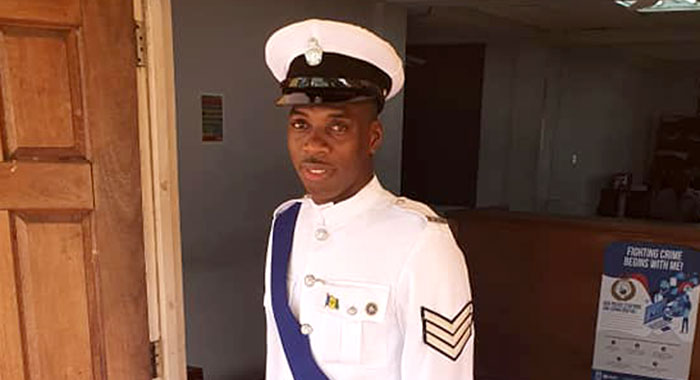 The Royal St. Vincent and the Grenadines Police Force (RSVGPF) will grant a scholarship in honour of detective Sergeant Philbert Chambers, 30, who was shot and killed in Campden Park while on duty on April 26.

Commissioner of Police Colin John made the announcement at Chambers’ funeral in Barrouallie on Sunday.

Hundreds of persons turned out to the funeral despite the COVID-19 pandemic in testimony of the impact of Chambers’ 11-year career in law enforcement.

John further announced that a plaque bearing the officer’s photo will be placed at the sentry post at the Central Police Station in Kingstown.

He further said that the police force would like to retire Chambers’ badge number.

“We are also in consultation and would speak with the relevant authorities as regard to retire the number 209 so that no other police officer would ever get that number,” John said.

John said he knew Chambers before he (Chambers) became a police officer as his (Chambers’) older brother, retired corporal of police Fitzbourne Chambers and John worked together at the Drug Squad.

As a constable, Chambers was “very motivated, very proactive, very much involved in everything”, the police chief said.

The police chief said that when Chambers died, another officer said that he did the work of about 10 police officers.

“He was involved in the work of the police youth club, he was a thorough investigator, he worked very hard, he was fair to his colleagues, he was feared by some criminals,” John said.

He said that because of Chambers’ assertive approach to his job, some persons considered him boasting.

“Most of all, he was fearless and it is my belief that because of his fearless nature that caused him to be at the forefront of the battle when he realised his demise.”

Police say that Chambers was shot and killed by Gleason Lewis, 39, of Campden Park as officers attempted to execute a search warrant at Lewis’ home.

Police later shot and killed Lewis at the scene — where Chambers also died.

A coroner’s inquest will be carried out into the deaths.

John said that Chambers did not only contribute to the police youth club but also to the elderly as well.

“He took the initiative to arrange food baskets for the elderly in the community,” he said, adding that the officer did this with the support of business places.

“He has left an indelible mark on the lives of many persons in the area. He was very young when he died but his contribution cannot be matched by many senior officers,” John said.

“At the rate at which Chambers was going, the lowest rank I could have seen him attain is the rank of superintendent. And I am honest about that,” the police chief said.

He said that when Chambers’ divisional commander, Superintendent Kamecia Black-Byam recommended him for promotion to the rank of sergeant, it was an easy decision for the promotion committee to make.

He said that Chambers was never disrespectful to authority, even when called upon to explain his actions.

“… he would say, ‘Sir, this and that is the case.’ And from the time he [would] explain, I could see the rationale as to why he did what he did and he did it in a very respectful manner and I just want to say thanks to you, Mr. and Mrs. Chambers for giving us a very, very good son.”