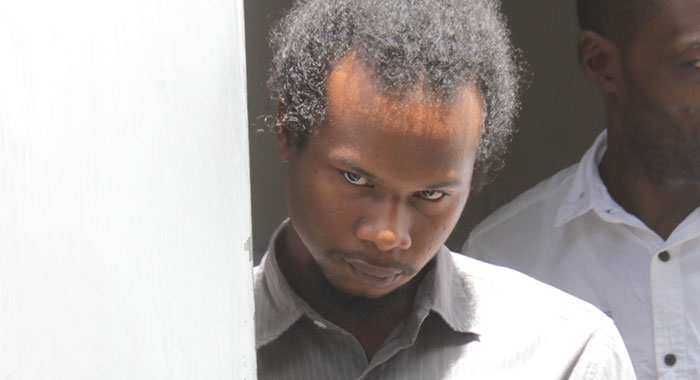 Kenrick Nero must pay a fine and not commit any offence for the next two years if he is to avoid a prison term. (iWN photo)

An Owia man, on Tuesday, escaped immediate jail time in connection with a firearm he made after being stabbed in February.

Chief Magistrate Rechanne Browne ordered Kenrick Nero, 27, to pay the court EC$800 immediately to avoid one month in jail for possession of two rounds of 12-gauge ammunition without a licence.

He also has to pay the court EC$10,000 by July 2 for possession of a homemade firearm or go to jail for nine months.

Further, Nero must not commit a criminal offence for the next two years, if he is to continue to avoid a two-year jail term.

Nero was sentenced at the Serious Offences Court on Tuesday, after he pleaded guilty on May 27 to charges at the Kingstown Magistrate Court that on that day, at Owia, he had in his possession a homemade firearm and two rounds of 12-gauge ammunition.

Senior Magistrate Rickie Burnett adjourned the hearing of the facts and the sentencing to the following day at the Serious Offences Court.

However, on the sentencing date, Nero who was unrepresented at the arraignment, was represented by lawyer Grant Connell, who asked for an adjournment to allow him to secure some documents.

According to the facts read on Tuesday by Corporal 172 Atnel Ash, about 4:15 a.m. on May 27, Corporal 403 Nigel John of the Rapid Response Unit led a party of officers to Nero’s home.

Upon arrival John showed and read to the defendant a search warrant regarding firearms and ammunition.

Nero agreed to the search and John told him that if he had anything illegal at the premises he should hand it over to the police.

The defendant said nothing but quietly led John to his bedroom, opened a clothes cupboard and handed over to the officer, a blue Jansport backpack.

John searched the backpack and found a red and black jacket in which was wrapped two pieces of pipe partially wrapped in electrical tape.

The two pieces of pipe appeared to be a homemade firearm.

The jacket also contained what was later found to be two 12-gauge cartridges.

John cautioned Nero, who told the officer, “A man stab me up sometime ago, so me make it to keep.”

Police firearms expert Sergeant Julian Cain later test fired a round in the homemade firearm and found it capable of discharging ammunition.

In mitigation, Connell noted his client’s age and that he is the father of two children, to whom he is sometimes mother and father.

Connell said Nero was employed as a landscaper in Mustique for nine years but was laid off because of the COVID-19 pandemic.

He noted that Nero’s age suggests that he began working in the Grenadine island –known to be playground of the world’s rich and famous — when he was a teen.

“No average Vincentian man can work for nine years and survive in the circumstances that exist on the island of Mustique and if you can survive for nine years, being spoken to and treated in a derogatory way and not break the law, that is the man before the court.”

Connell said that Nero cooperated with the police from the inception, adding that contrary to what the prosecution often says of the modus operandi of guilty persons, Nero did not run when the police came to his house.

The lawyer said that his client had the firearm in the “bosom of his house” and never took it out and had acted out of instinct when he made it “merely for protection”.

He noted that the Nero was attacked and stabbed in February but no one had been arrested although he had made several reports to the police.

Connell also presented to the court a document from Pastor Presley Daniel who said Nero has been a churchgoer and further spoke positively of the defendant.

The lawyer reasoned that his client was not a threat to society.

“This says that this is a young man that doesn’t have the qualifications to attend university behind those walls,” Connell told the court, referring to prison.

The lawyer said that he knows that the offence is a serious one that often attracts a four-year custodial sentence, with a low of three years.

He, however, asked the court to consider a fine and if a custodial sentence is imposed, to suspend it.

In his submissions to the court, Senior Prosecutor Adolphus Delplesche told the court that he had read the document from the pastor, and had heard the mitigation of the defence.

Delplesche further said that he had asked Ash to touch base with the police regarding the report of the stabbing by the defendant.

Delplesche said Ash had reported that the police said that the Feb. 29, 2020 wounding report was still under investigation.

“This is a very sad case, you honour. Unfortunate, I would say,” the prosecutor told the court.

“And what makes it sad is that the defendant said he was stabbed up, he made a report but he built this gun to defend himself. And given the climate we all have in St. Vincent and the Grenadines, a man has a right to defend himself, the law allows it.”

The prosecutor, however, said that the seriousness of the offence should not be lost in the unfortunateness of the situation.

“That’s my submission,” Delplesche said then took his seat.

“Any representation on sentencing?” the chief magistrate asked the prosecutor.

“That’s my submission,” the prosecutor repeated.

In her sentencing remarks, the chief magistrate noted the seriousness of the offence, pointing out that the maximum sentence is seven years in prison, a fine of EC$20,000, or both.

Browne noted that the circumstances of the case are unfortunate, but pointed out that based on the sentencing guidelines, the reason for Nero having the gun was an aggravating feature.

The chief magistrate handed down her sentence after standing down the matter and considering her sentence in chambers.