Vincies charged in Grenada while awaiting court rulings in SVG 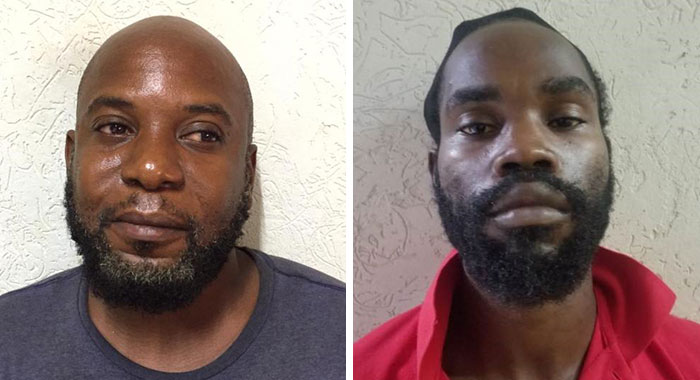 A Vincentian man awaiting a verdict after a trial on drug possession, firearm and ammunition offences in St. Vincent and the Grenadines has been charged in Grenada in connection with a drug bust there.

Rennie Cruickshank, 39, is among eight Vincentians charged with drug-related, money laundering or other offences in Grenada between March 14 and May 18.

He is the second Vincentian, the first being Junior Jamal “Trunkie” Charles, 30, of Chauncey, to miss a court date in Kingstown because of arrest in Grenada.

As a result of his detention in St. George’s, Cruickshank was absent from the Serious Offences Court, on May 25, when his matters came up for Chief Magistrate Rechanne Browne to give her verdict.

Present in court, however, was the accused man’s mother, Arisha Cruickshank, also of Campden Park, who had stood bail for him in the sum of EC$15,000.

The woman is now at risk of being ordered to pay the court EC$15,000 or face jail time.

When asked about her son’s whereabouts, Ms Cruickshank told the court that she had seen on the news that he had been “caught in Grenada with–”

“With what? Cooking gas?” the chief magistrate said.

“He was caught with marijuana,” Ms Cruickshank said.

She continued: “I bailed Rennie so he can change his life, but–”

She further told the court that based on what she had seen online, her son is in custody in Grenada.

And, Senior Prosecutor Adolphus Delplesche told the court that while his information was not official, he had read in the news that the accused man had been apprehended in Grenada.

He said he would try, through Interpol, to ascertain the accused man’s status in Grenada.

Delplesche said that if it is that Cruickshank is to be detained in Grenada, he should be brought to account, and if not, he would be repatriated.

He asked for a one-week adjournment.

In the meantime, the chief magistrate reminded the surety that the bail amount is EC$15,000.

“Being a surety is a serious responsibility,” Browne told Ms Cruickshank.

She adjourned the hearing to June 8.

Browne was tried on charges that on Sept. 29, 2019, at Yorke Mountain, he had in his possession 1,362 grammes of cannabis” with intent to supply it to another.

He was also tried on a charges of having in his possession one .25 semi-automatic pistol and two rounds of .25 ammunition without a licence.

Reports out of Grenada are that Cruickshank and Grenadian Kenton Roberts have been charged in connection with 419 pounds of compressed cannabis found on a beach on May 15. They return to court on Friday, June 5.

The drug is said to have an estimated street value of EC$1 million.

Cruickshank was deemed a flight risk and was denied bail, while his co-accused was placed on EC$200,000 bail.

They return to court on June 5.

Charles, was absent from the Kingstown Magistrate’s Court last month when Senior Magistrate Rickie Burnett was scheduled to rule on a no case submission in relation to charges against Charles and three other persons in connection with an altercation at the Chauncey cemetery on May 27, 2018.

The altercation took place at the funeral of Je-Tonnia Thomas, 32, the partner of Paul Stephens, of Barrouallie, who was injured during the altercation.

In grenada, on May 10, Charles fined on charges of intent to supply drugs, money laundering and illegally entering Grenada.

Another of the Vincentians charged in Grenada is Ricardo McFee, 32, a vendor, of Kingstown, who was charged in connection with the May 11 seizure of EC$14,000 at a home in Grenada.

And, Vincentian bus driver Conlar Charles, 48, along with two Grenadians, was charged in connection with a May 11 drug bust off Carriacou.