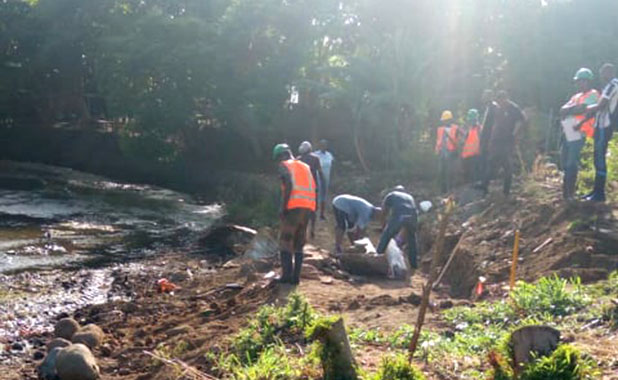 Persons at the scene in Buccament Bay, where the skeletal remains were found on Saturday.

The discovery of what villagers says looked like a human skeleton in Buccament Bay on Saturday has brought back memories of the lives lost in that village and across St. Vincent during the Christmas floods of December 2013.

A man who was among a team working on a river defence project in the area was digging dirt in an area about 300 yards from the mouth of the river when he came upon what appeared to be a human bone.

The man told iWitness News that the bone was long and appeared to be the ball joint that connects the arm to the shoulder.

As they continued digging, he came upon what appeared to be a shoulder bone.

Then, the men came up on even more bones and decided to call the police.

The villager who made the discovery said that they had first come upon a mattress and later what appeared to be an article of clothing before they started finding the bones.

When police arrived, the men assisted them in digging up what turned out to be a significant number of what is believed to be human bones.

The villager told iWitness News that the skull was partially crushed as there were a lot of stones mixed in among the bones.

Villagers have speculated, based on the clothing found in the area, that the skeleton is that of a female.

Nine persons have been confirmed dead and three are missing and presumed dead as a result of the trough system that dumped 12 inches of rain on St. Vincent within three hours on Christmas Eve 2013.

The three persons, all females, were never found after flood waters washed them away in Buccament Bay.

Jozel Morgan-Small, a 27-year-old chef who was washed out to sea as she and co-workers attempted to cross a flooded road on their way home from Buccament Bay Resort;

Inka Jack, 12, of Questelles, along with her mother, Hazel-Ann Jack, was washed away as they vacated when flood waters began to enter their home. The mother was later found caught in a tree; and

Sheila Edwards, 36, of Buccament Bay, was washed away along with her boyfriend, Conrad Jack. Mr. Jack was later rescued.

Residents have concluded that the skeleton is unlikely to be that of Morgan-Small as she was washed out to sea.

They have speculated that it is that of Jack or Edwards, because of the area in which they bones were found.

Residents of the fishing village had long speculated that the bodies of Jack and Edwards might have been covered by the large amount of silt that the river deposited on its banks during the extreme weather event.

Police and funeral home staff removed the bones from the scene on Saturday.

Police have not made any statement about the find.

One reply on “Villagers speculate skeleton is 2013 flood victim’s”